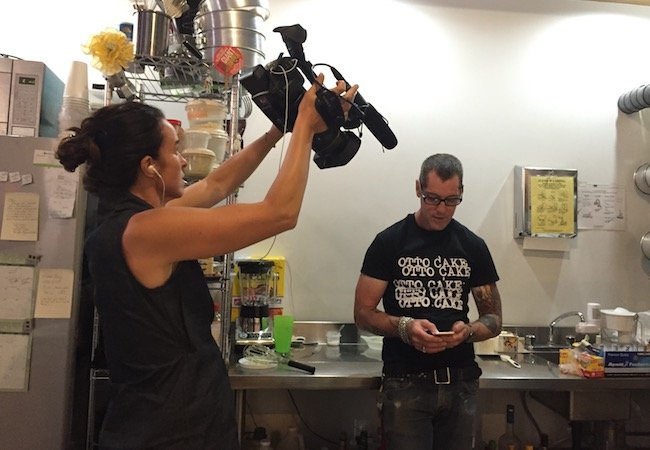 Ottomaticake came about much like Otto’s cheesecake—an unexpected surprise beginning, followed by many challenges, capped off with a joyous ending.

As a long-time friend of Otto, I filmed his performance of Hedwig and the Angry Inch by John Cameron Mitchell and Stephen Trask at the Doris Duke Theater in Honolulu back in 2006. Shot on Mini-DV, those two tapes moved with me from San Francisco, to the East Coast, and back to Los Angeles. I never thought I would make a film with them. Ten years later, deep into the editing process of Ottomaticake, I finally salvaged a deck to play these nearly forgotten recordings—I knew right away the footage was invaluable to revealing the depth of Otto’s creative self and completing his portrait in my documentary.

How did one taping of a local production of Hedwig and the Angry Inch turn into the feature-length documentary Ottomaticake? I knew Otto baked cheesecake, played in a punk rock band, roller skated, and was an all-around fascinating character, but I didn’t have a story. In September 2012, after almost a year and half subjected to verbal and physical harassment at his Otto Cake shop in Honolulu’s Chinatown, Otto asked me if I could bring my camera and document the death threats he was facing from drug dealers on his street. I said yes, not because I wanted to make a film about police corruption, but because I realized that Otto’s personal story could help others, inspire them to be themselves, and discover their full potential.

Otto getting ready to perform Hedwig in 2006. Image courtesy of Talcual Films.

Otto is a self-made man—his brain is wired differently. He has an almost childlike innocence and naiveté. As a kid, he was placed in special education. No one ever taught him to read. Despite the many challenges he has faced, Otto has chosen happiness and carved a place for himself in this world. What was his recipe for happiness, I wondered? Surrounding himself by the things that he loves, I learned. But what were his ingredients? “Punk rock, roller-skating, riding rollercoasters, and making cheesecakes,” he would answer.  At a time when my filmmaking life was going slow and my heart had been broken, I instinctually said yes to documenting Otto’s journey, because I knew I could benefit from just being in his creative presence and witnessing his struggle.

When I started following Otto in 2012, I had worked for four years on Lourdes Portillo’s groundbreaking documentary Señorita Extraviada. I had also produced and directed with Celeste Carrasco on Ella Es El Matador (She is the Matador), and executive produced two documentaries in Spain with Julio Medem. My experience with the fundraising aspects of independent filmmaking clued me into the long journey that we would face.

I sensed from start that in the very competitive, social-issue documentary funding climate, pitching a project about a multi-faceted white man from Hawaii who had found his recipe for joy in baking cheesecake, would not make it to the top-tier of “urgent documentaries” with measurable impacts. But I also knew that Otto had lived a very unique life and had a way of seeing the world that could benefit all of us, if only we could learn about his story. Happiness is hard to measure and not in the priorities of most foundation guidelines. Yet wouldn’t audiences be interested in getting to know the trials and tribulations of a unique man who brings us joy with his “amazing plain” cheesecake?

Otto at work in his Otto Cake Bakery in Kaimuki, Honolulu.

With Ottomaticake I made a conscious choice not to write a funding proposal, and to make this film on a shoestring budget with my own resources.  I took this film as an experiment. I wanted to test how far I could go to face my own creative fears. My previous documentary Ella Es El Matador (She is the Matador) was beautifully shot by Celeste Carrasco and funded by Latino Public Broadcasting, among other funders, and aired on POV. With Ottomaticake, I chose to shoot this film myself, something that scared me. Using the equipment I had then: a Sony XDCAM PMW-EX1, a RØDE Shotgun mic, and a set of Sennheiser wireless mics—I would be a one-person crew. To my surprise, what I initially thought would be a short film of no more than 15 minutes, evolved into a feature documentary following Otto’s life over a period of four years. I managed to shoot the entire film for ten thousand dollars. Much like Otto’s cheesecake, the documentary transformed into a DIY project. I had to face my own fears as a one-woman crew with no budget to craft something beautiful.

Documentary storytelling for me is the act of entering a universe in which you find reflections of yourself through others. No film I embark on is like any other—each story I choose becomes its own journey. One of the early realizations I had with Ottomaticake was that I was documenting the life of a man with unique focus. Previously, I usually got to know the protagonist by conducting an in-depth interview at the start. But Otto’s brain is different, remember?  So he didn’t work this way. Otto was always baking, and finding a couple of hours to interview him became impossible. Instead he would keep on baking and toss me contact information of people who had known him over the years. He would say, “ Gemma, here call David, we used to play together in the punk rock scene.” So there I went. Listening to others talk about Otto revealed an infinite universe, and a story that could inspire audiences across cultures.

The process of interviewing Otto’s friends and family lasted three years, while I also organically followed Otto’s daily routine in his cheese cake shop.  Otto was the last person I did a sit-down interview with. At that point, I knew Otto through the eyes of others and through the hardships he overcame. 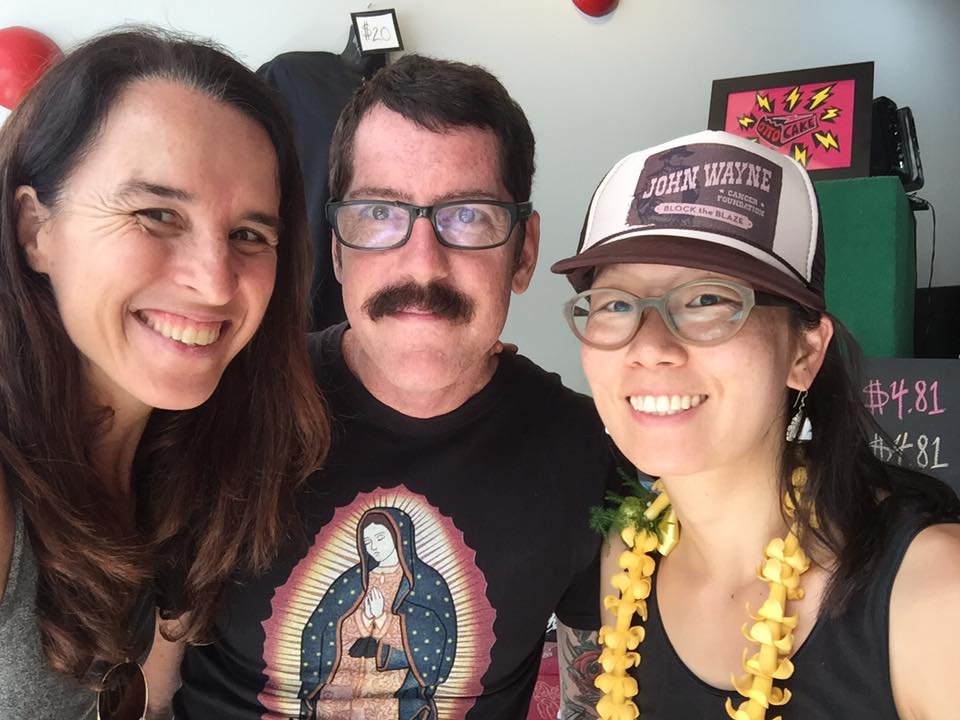 Gemma, Otto and Kyung after landing in Honolulu and visiting Otto Cake.

By the summer of 2015, I had shot and logged close to 100 hours of HD video that I mailed to my editor Kyung Lee, right before I traveled to the Cook Islands to begin shooting my next documentary, Homecoming. Otto is a very creative and complex man, yet I knew that this film would be about lightness and joy. I had a sense of Kyung’s spirit through my work with her over the years, and I knew she had not only the skill and talent, but the personality to bring Otto’s quirkiness to the fore. While I was busy filming Homecoming in the South Pacific, Kyung transferred the Ottomaticake project from Final Cut Pro 7 to Adobe Premiere, screened all the footage, researched Otto Cake’s Instagram images, and tracked down recordings of Otto’s punk rock life online to craft the first assembly.

When I returned from my trip, I knew two things: Kyung needed to meet Otto, the real man, to understand his essence outside of the frame, and she had to try his cheesecake. Otto travelled to San Francisco to meet Kyung (and to ride roller coasters). A year later, I brought Kyung to work with me in Hawaii, where she finally tried Otto’s amazing plain cheesecake flavor.

The editing and post-production phase lasted almost two years, during which Kyung exhibited the best of her personal and creative skills. I wanted to create a portrait of a man whose life had been marked by following very specific passions; I also knew that the cheesecake was a visual metaphor for transformation. As Otto says in the film “Everything in my life happened because of the cake.” The viewer would get to know Otto not directly through his words, but in witnessing a kaleidoscope of testimonies, reflections from the people who knew him best and loved him.

Otto was a punk-rock musician and so every aspect of our post-production was consciously low-budget and DIY as well. We decided we would only use Otto’s decades long catalog of music from bands like The Sticklers and 86 List. The same decision was made across the board regarding archival footage.

A major problem arose when I realized that I had to clear the rights to use the footage of Otto performing Hedwig and the Angry Inch. Otto had done his job at clearing the performing and producing rights, but ICM Partners had never authorized recording rights. When I contacted Patrick Herold at ICM Partners and explained that I had recorded Otto never intending to make a documentary, he responded that, “though sympathetic with my plight, the recording was unauthorized and… it would be terribly complicated to clear.” Luckily, a few weeks later and after viewing the rough-cut of the film, Patrick’s partner Emily Mann got back to us: “I have conferred with Patrick and we have determined that we will be able to make an exception in this instance. You may go ahead and use the short footage in your documentary.” Elated with the news, Otto made sure to drop his “magic cake” at the ICM Partners office on his next trip to New York City, in spite of tight security. Patrick and Emily were no doubt pleased to be paid for the rights with cheesecake!

Otto practicing one of his passions.

It was only after Kyung and I completed the rough cut of the film and showed it to Otto that I reached out to a funder, Suzanne La Fetra, who had supported all my projects over the years and is now a producer and director in her own right. She loved the rough cut and with her financial support, I was able to complete the sound mix with Philip Perkins, the color correction with Heather Weaver, and other collaborators. We finished in time to celebrate Ottomaticake’s world premiere at the 37th Hawaii International Film Festival in their “Made in Hawaii” competition section.

Through Otto, I am reminded that no matter who you are, if you are truly authentic and true to your gift, you can carve a place for yourself in the world. I am grateful to Otto for teaching me how to be a more resourceful, less worried, and ultimately more joyful filmmaker. In making this film I learned to dig deep into my own creative self with minimal financial resources. Otto has much to teach us about living locally, authentically, creatively, and choosing to surround ourselves with the ingredients we love in our lives. Through everything, he exudes an eternally youthful spirit.

For Otto, life is about cheesecake, punk rock, and roller coasters. For me, it’s about teamwork, documentary storytelling, and a leap of faith. What ingredients bring you joy? Aloha. MM

All images courtesy of Talcual Films.

Shooting At Your Own Risk: The Art of the $1,000 Feature
MovieMaker Melee: 1985 and Tyrel Writer-Directors Yen Tan and Sebastián Silva Debate Their Processes’ Pros and Cons