"I Do As Little CG As Possible:" Gareth Evans on The Raid 2 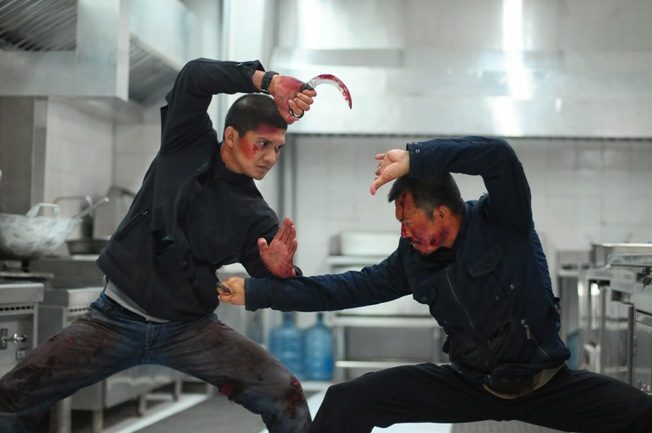 The Raid 2 is a kick in the head – literally.

It’s also a kick in the ribs, a smash to the gut, a punch in the face. The Raid 2 is a two-and-a-half hour live action cartoon of creative violence, a gleeful display of martial arts fighting in unusual (and confined) spaces. Picture protagonist Rama (Iko Uwais) kicking ass in a bathroom stall, inside a high-end BMW, and on a crowded subway car.

Welsh-born, Indonesian-based director Gareth Evans became fascinated with pencak silat, a broad term for all Indonesian fighting styles, when he was hired to do a documentary about silat. Gareth dove into shooting silat for the doc and along the way made a great discovery in Uwais, an Indonesian martial artist who was working as a deliveryman for the phone company when he met Evans. Since then, Evans and Uwais have gone on to make three films together: Merantu, The Raid and most recently, The Raid 2

The rest of the cast is equally indelible, with Indonesian star Julie Estelle’s portrayal of Hammer Girl becoming an instant classic. “I wanted a girl character – The Raid was such a sausage fest,” laughed Evans. (By our count, there were only two girl characters in The Raid 2. Sorry, but two girl characters awash in a sea of testosterone still constitutes a sausage fest, Gareth.) But as you might have guessed, Hammer Girl ain’t no Hello Kitty bow-in-the-hair kinda girl. As her name would imply, her weapon of choice is, yep, you guessed it, hammers. That’s hammers, as in plural. Why? “Because two hammers are better than one,” said Gareth. Hammer Girl is a deaf mute who ably dispatches a subway train full of assassins with murder in their hearts. Her brother is Baseball Bat Boy, who takes out adversaries with a Babe Ruth’s signature “called shot” gesture followed by a mighty swing of his American white ash bat, and ends with a line drive to the head. Ouch. Both Hammer Girl and Baseball Bat Boy are comic book characters straight out of Walter Hill’s The Warriors or John Carpenter’s Escape From New York (which was a big influence on The Raid).

Evans’ approach to orchestrating ass-kicking flows organically from the movement of the story.  Each situation provides unique opportunities for designing truly dynamic fight scenes, with Evans intuitively taking advantage of every obstacle thrown in the way. In his capable hands, even the standard action film car chase scene is infused with fresh blood. Instead of simply filming cars chase and dodge each other on a crowded freeway, a staple scenario we’ve been accustomed to seeing since before Bullit, Evans ups the ante by using the tight confines of the Teutonic luxury sedan to stage an epic brawl on wheels. As the director said, “I can use the seatbelts as a weapon. I can drive the car into oncoming traffic.” Hey, it’s fun playing God. And Evans is indeed master of his cinematic universe, setting the stage for one Big Bang after another.

But before the first roundhouse kick is delivered on location, Evans does his homework with an exhaustive “previz”, or pre-visualization of the action. The audacious car chase, Evans remembered, “looked terrible in previz, because all those cars are moving very slow. It was like watching a game of Pong on Atari. So there’s a lot of guesswork in terms of ‘Is this actually going to work? Is this going to look right on camera?’ Matt (Flannery – the DP) and I go through and shot-list it, then we’ll make a full plan for the whole thing, and then we’ll go off and take photographs of what we think the shots will look like and which lenses we’ll use.”

It’s an intricate process. But on set, once the bloody ballet of violence has been roughed out, Evans said he “surfs the Internet for an hour” while his fight choreographers go off to work out every beat of the beating. It takes a lot of meticulous planning to make the violence look spontaneous while at the same time remaining just this side of safe. But even Evans confesses to once having dodged a bullet on set as a stuntman fell out of a car the wrong way and came within inches of having his head crushed like an overripe mango. Fortunately, Evans was able to laugh about it now: “Real blood looks fake!”

Evans’ contributions to the fight’s choreography and dialogue are usually limited to a few well-placed “drag the knife more” or “smash his head more’” comments and voila! The fight is choreographed. For all of his balls-to-the-walls direction, it’s the fight choreographers, and camera crew, who are the true heroes of The Raid 2. However, what makes The Raid 2 transcend genre is not the prodigious ass-kicking; it’s the film’s sense of humor. Much of that stems from Evans being a really funny guy himself. It’s probably a Welsh thing; Gareth is definitely someone you’d want to have a few pints and laughs with down at the local pub. He brings an easy sensibility to the film as he builds beats of humor into the action sequences.

In many ways, Evans uses the camera like another martial artist in the fight team. His camera, the RED Scarlet, moves in a light-footed way, literally being handed from one moving car to another during a car chase scene. “In terms of the camera work, the cameras have started to get a bit lighter now,” said Evans. “The RED Scarlet is the lightest version of the RED, and so we were able to set down the Fig Rig on the steering wheel. That means we were able to come down low and come up high, and shift around, and be more dynamic with the movement in terms of the action scenes.” A second director of photography was placed in the passenger seat of the second car to take possession of the camera as it was passed by hand to continue capturing the action in the second vehicle.

The resulting car chase is a spectacle worthy of James Cameron’s 1991 classic T2. Given his confidence and surety moving of the camera, it’s no surprise Evans has known his cameraman since they were both 19 and shares the shorthand all great collaborators do. “He’ll know when I tell him ‘Give me a Kubrick shot’, ‘Give me a Raimi shot’,” Evans said. The results are impressive.

Not surprisingly, given the film’s sparse (by Hollywood standards) budget of $4.5 million, the director is a proponent of doing as many effects as possible on camera. “I do as little CG as possible. The CG is only there to enhance the real,” Evans said. “Even if it doesn’t work practically, they’ve got something to build on.”

Only because Evans has raised the bar so high in the action genre, though, does any of this nitpicking matters. He’s simply too good of a filmmaker to let his films slide on the storytelling. If someday he’s able to master our emotions the way he does our adrenal glands, he’s going to be filmmaker every bit as dangerous as Hammer Girl and Baseball Bat Boy on a bad day. MM

Gold from Straw: Brotherhood, Perseverance, and Creative Editing in Mistaken for Strangers
Under the Skin and Out of the Box: A Short Discussion of Guerrilla Filmmaking