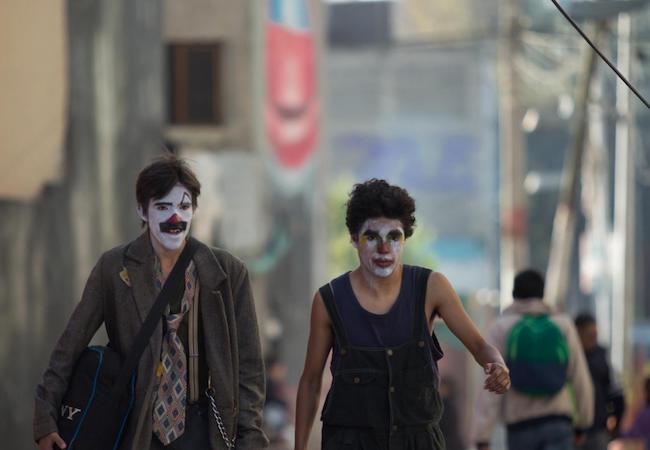 In the opening scene of Chicuarotes, the second film Gael Garcia Bernal has directed, two teens board a bus in clown makeup and do a comedy routine. When the passengers aren’t keen to hand over some coins in appreciation, one of the teens pulls out a revolver to encourage them.

The term “chicuarotes” refers to those who come from San Gregorio, a neighborhood in Mexico City, and is a play on words, denoting both a type of chili pepper and a type of hot-headed individual. The teens are desperate to escape the poverty and violence of San Gregorio, but their actions trap them more completely.

“The characters start to justify their actions by saying, because we’re poor,” Bernal adds. “It’s not even the poverty of the living, it’s not material, it’s a much more emotional thing.”

Chicuarotes, which does not yet have a U.S. release date,  screened in the Contemporary World Cinema section at the Toronto International Film Festival.

Bernal’s journey in making Chicuarotes was fueled largely by curiosity and a commitment to authenticity. He and his team drew inspiration from films, used imagination, and conducted a workshop with young kids from the area for about two-and-a-half years.

Bernal also wanted to avoid a stereoptypical redemptive ending for Chicuarotes. “The film is ultimately about their pathway, and a much more daring, much more radical notion of goals,” he explains.

“The problem is that we live in a time of utter certainties and those certainties, even if they’re complete lies, [can be a] driving force,” Bernal adds. “That’s the great function of cinema nowadays. It is one of the few mediums that can challenge uncertainties through discourse and can bring complexity to an issue.”