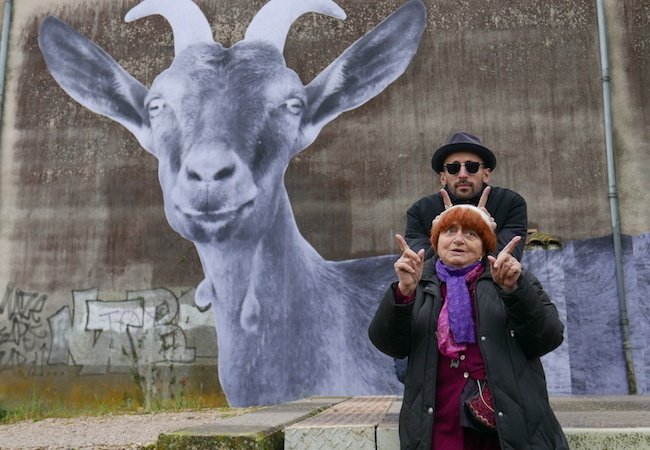 Despite an illustrious directing career that spans six decades and has crowned her with what must surely be the burdensome title “the godmother of the French New Wave,” the still-spritely 89-year-old Varda prefers to live in the here and now. “I never give advice,” she states firmly, with a toss of her eye-catching bob of half-mauve, half-silver hair that could justify a “godmother of punk” moniker. “Even for young people in film schools when they ask me. I just say ‘enjoy.’”

After helming nearly two dozen films, including the masterworks Cléo from 5 to 7 and Vagabond, Varda must certainly be reveling in the continued recognition that greets her every move. Lately that includes retrospectives in New York and Los Angeles, and being presented with an honorary Oscar at the Governors’ Ball in November, where she took a much-publicized twirl around the stage with presenter Angelina Jolie.

“The Oscars are so American,” Varda says somewhat dismissively of the honor. “I suppose I’m recognized as a decent filmmaker. That’s how I understand it, but none of my films have been nominated for Oscars.”

That fact could very well change this year with her latest film. Faces, Places, the playful, ultimately powerful road movie/documentary she co-directed with a 33-year-old muralist known only as JR, has been short-listed for the Academy Award for best documentary, and has been met with wide acclaim. This means that it’s possible Varda, indifferent toward filmdom’s highest honor, could find herself on yet another shortlist—the handful of women to take home two Academy Awards within a single year.

At the end of an exhausting press day, Varda admits that she didn’t expect to work again after completing The Beaches of Agnès, her profound 2008 self-reflective portrait that saw her looking back on a memorable life that included meditations on feminism and her fabled marriage to fellow moviemaking icon, the late Jacques Demy. But the appeal of travel throughout rural France alongside the puckish wunderkind JR eventually proved too irresistible. “The way we met, it was friendship at first sight,” she recalls of their first encounter. “Then we started to work and it became a new adventure in my life.”

The fast friends hit the open road in JR’s van to produce portraits of small-town residents both cinematic and literal (a photo booth and large-format printer aid in the creation of epic-size murals). But it’s the cross-generational connection between the two artists that provides the film with both humor and sensitivity.

Those are qualities that Varda has consistently demonstrated since her moviemaking debut. “I wish I could remain as radical as I was,” she says. “When you think about all the films, it is daring to be optimistic and radical to love people. We chose something so original to be optimistic.”

Varda recounts a story that took place a few days earlier. She and JR organized a gigantic picnic at the U.S.-Mexican border fence. The intent was to make a political statement illustrated by depicting Mexican people and American people sharing the same food and drinking the same water. “We can’t change the world,” she says, “but we can propose moments of understanding.”

Those words could as easily apply to Varda’s entire career. MM

Getting to the Heart of Lady Bird: What Makes Greta Gerwig’s Debut Tick
Pitch Perfect: Bavo Defurne on Directing Isabelle Huppert and Songwriting for Souvenir