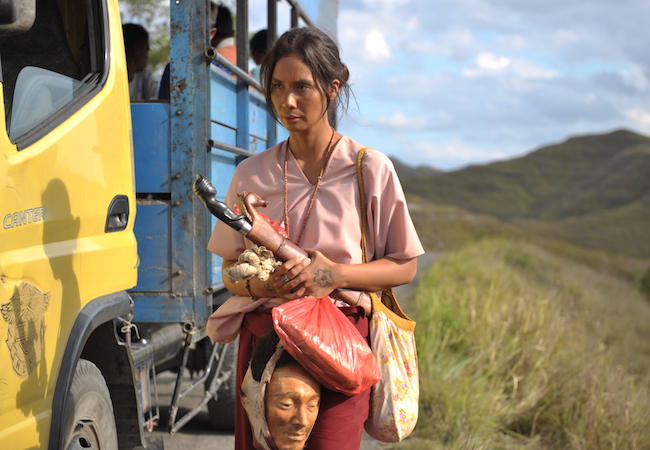 Reminiscent of Sergio Leone’s Spaghetti Westerns, Kurosawa’s samurai epics, and by extension of Tarantino’s revenge tales, Marlina the Murderer in Four Acts is an Indonesian take on the classic tropes popularized by spaghetti westerns, adapted to hit culturally specific notes.

Conceived by Mouly Surya, an accomplished director whose films have screened at major festivals including Sundance and Cannes, this partitioned saga of female empowerment in the face of brutal abuse is engrossingly peppered with a vagabond ghost, a severed head, and sharp blades for a largely subtle genre concoction. Shot between vast landscapes and tight interiors, the imagery captured is as inspired as the plot is gripping.

The impromptu warrior gracing the title with her name, Marlina (Marsha Timothy), escapes a horde of deviants trying to take over her house and her body by force in the wake of her husband’s death. To save her life, she resorts to fatal force and embarks on a pilgrimage for justice, which she will get even if the inept authorities fail to grant it and she must carry it out herself. Along the way, a young woman on the brink of giving birth joins Marlina, and is pushed by the circumstances to become a sympathetic accomplice.

Although the film had a U.S. theatrical release in the summer via KimStim, Surya visited Los Angeles this fall to attend various events related to the film’s campaign in the Best Foreign Language Film Oscar race, and spoke with MovieMaker about embracing the operatic nature of the screenplay and shooting on the island of Sumba.

Carlos Aguilar, MovieMaker Magazine: During the writing process was it always your intention to divide the narrative in four clearly defined acts? Where did this decision come from and why?

Mouly Surya: When I received the idea from Garin Nugroho, a renowned filmmaker from Indonesia, he already had his story outline formed in acts, it is something that he has done previously in his operatic films. He had already divided the story outline in a prologue, acts and an epilogue, even though the narrative was quite different with the one we had now in the film. But we kept the initial premise of the film and when I was looking for the title, I wanted to have that operatic touch along with the overall “genre” feel you get when you hear Marlina the Murderer in Four Acts.

During the research I came across an interview of a teacher in Sumba Island. She got some harsh criticism from the local media because a video of her dancing to disco at a teacher’s lounge had gone somewhat viral on the Internet. In that interview, she is totally livid that they made her off-duty activities— what she does outside working hours—a bigger problem than it really is. Indonesia has a culture of people being reserved and polite, especially in front of the media, what she did was impressive and her name is Marlina. That’s how the name Marlina came about. Garin Nugroho had just titled the whole thing and the character “The Woman”

The first thing I did is to personalize it. Along with the premise, I wanted to keep that operatic feel because each act was somehow built upon certain settings, opera-like, or, I would prefer, ballet-like. The first act has always been the robbery in her home, the second act was her journey and the third act was the confession. It was originally in a church but we decided on a police station instead: a government institution instead of a religious one, hence the conversation in the hills between Novi and Marlina where they discuss whether going to one or the other.

In Indonesian, the acts’ titles were planned to telegraph stuff that will happen in the acts. The first act’s title would literally translate to “the robbery that will happen in half an hour”. But in English it just wouldn’t work as well, hence the simplified title. But that was the basic idea that the acts were parts of the narrative construction on how the audience will perceive it.

MM: Logistically, what were some of the advantages and challenges of shooting in the island of Sumba? Did you have to fly in equipment and crew in or are there resources for moviemakers on the island?

MS: We had to shoot in the island to get the look of nature that we wanted, as shown in the film, at a specific time of the year. It actually decided a lot of things for us because we had to meet that deadline or else wait for the following year. We had to drive in everything, because only small planes go to the island’s airport; it is also decided a lot of things for us. Our budget, with this access limitations, didn’t allow us to bring tons of equipment, we didn’t even bring lighting equipment since it was designed from the very start for us to only shoot exterior day scenes on the island. There are a lot of limitations, so we had to think really creatively on how to make it work, beginning with the screenplay. I am not complaining, I love these limitations and this is what movie magic is all about for me. That sequence when the rest of the robbers came to Marlina’s house after Markus in the first act was quite a feat for an Indonesian film as we combined the stuff we shot on the island with what we will shot later in the studio. Only half of the gang actually flew in to Sumba so we had stand-ins and then reconstructed their conversation during post-production.

MM: Are Westerns a genre that you were fond of prior to making the film? What is it about Westerns that attracts you?

MS: Actually no, I am not a particular fan of any genre but then Western has always intrigued me because it is a genre that is rarely done in Asia in its classic stylistic form. Its icons are so specific to the West. But I’d argue that we could find its narrative form in Samurai films from Japan, and I also love Jim Jarmusch’s anti-western Dead Man, because of it’s flexibility with the genre and its specificity, I mean you don’t find many anti-genre of anything else right? I mean anti-horror would be just a drama or a thriller. I think that’s what attracted me the most and where the idea of making Marlina into a Western came from. Although I’d admit that it is a more instinctive thing at first rather than a measured one.

A scene from Marlina the Murderer in Four Acts

MM: What are some of the influences that have shape your cinematic style?

MS: I’ve always been into books. I love Japanese comic books and anime since I was a child. Unconsciously I always find those styles seeping through into my cinematic style. I also studied media and literature and then film school in Australia for almost seven years. Those were really formative moments for me, and it was then that I found my first favorite director: Stanley Kubrick.

MM: In terms of the cinematography of the film, the story takes places either inside small spaces like Marlina’s home or the vast landscape outside. What were you looking for visually?

MS: A lot of it has to do with the narrative. To make it seem logical and justify why wouldn’t she run away when the robbers came, we had to show how far it is from one house to the next in this world. That way it made more sense. And it also had to capture that as well as has to be simple and effective because otherwise we couldn’t afford it! The beauty of limitations, right?

I remember shooting the scene when Marlina and Novi are waiting for the truck/bus. It was a very extreme location and I wanted to shoot it from an opposite hill. The first location we picked didn’t have an opposite hill and so my production designer, Franz Paat, found me one, even when I was ready to let that shot go! I had a really great team that supported my vision.

I’ve also worked with my cinematographer, Yunus Pasolang, for all my three films and everyone was surprised I had never had coffee with him outside of work. But we communicated through Caravaggio, Hopper and tatami shots during development and filming. He had a specific vision as well on how we would framed the film to make the cinematography a big part of the narrative. I love the beginning of the second act when after 30 minutes of being super closed off in that tiny home, we see Marlina in the distance carrying the head in her hand under the beautiful sun.

A scene from Marlina the Murderer in Four Acts

MM: In reference to spaghetti Westerns, your film has been referred to as “the first satay Western film.” As you were writing it were you concern about making a film that used the tropes of the genre but still felt authentically Indonesian?

MS: Aside from my cinematographer, I don’t think anyone was really consciously aware that we are making a Western when we filmed it! I mentioned it during development to all the main cast and crew, but not so much during filming. I guess I crafted the balance of the narrative in the script, but then again, the story and narrative actually came first to me, and the genre came later instead of the other way around. The genre is the tool to deliver this Indonesian story and whenever there is a fight between the two, the story wins.

MM: Tell me about casting Marsha Timothy as Marlina. What were you looking for in an actress to embody this daring role?

MS: My producer/husband, Rama Adi, is actually the one who proposed her. There wasn’t an “obvious” choice to cast someone like Marlina. We talked to her a few times years before we started to shoot the film—even before I started writing the script. We never auditioned her but I think what I tried to find is her passion for the part, how bad she wanted it, because she needed to dive head first into the part and then she did.

MM: How difficult is it to make films in your country in terms of financing and government help?

MS: We don’t have government funding but because of the growing industry and market, we’ve had a lot of interest from local investors as well as foreign financiers for the past few years. What was difficult is that it is still a very young industry and nothing is systematic. MM

NewFilmmakers LA: Andrew Vasquez, Daniel Watkins, Erica Eng, Horace Gold, and More
“Do Something That Doesn’t Bore the Crap Out Of You”: How Rust Creek Dir. Jen McGowan Avoided a Cookie Cutter Career