“Everybody get the bongos out,” laughs 21-year-old Florence Pugh when describing her English childhood.

A bohemian upbringing she says was “von Trapp-esque” helped her gain the confidence that has now propelled her to the precipice of a rich acting career. After Sunday lunch at their house, when their parents and guests had eaten and drank their fill, Pugh and her siblings were called upon to perform songs and skits. While on holiday, the Pughs would even bring a guitar to restaurants and sing, getting the other patrons to join in. (The eccentricities don’t stop there: The family had a black sheep for a pet—Bertie—who would wear a diaper and jumpers around the house.)

Florence began making music by herself as a pre-teen, posting Elvis covers on YouTube and Myspace—look them up!—though her singing dreams have been put on hold for now. A few years ago, the Oxford-based teenager found herself auditioning for a role she thought she had no chance of getting. Her mother convinced her to make a tape anyway—and she got the part, a major role in the British film The Falling (directed by Carol Morley), opposite Game of Thrones’ Maisie Williams.

Some short years later, and Pugh’s stardom has ascended, as the lead in Lady Macbeth. William Oldroyd’s darkly gothic 19th-century English tale, an adaptation of Nikolai Leskov’s 1865 novel Lady Macbeth of Mtsensk, examines how strong characters ultimately find ways to assert themselves against oppression, even if that assertion manifests itself in violence. As the young Katherine, thrown into an arranged marriage with an abusive—though in his own way pitiful—husband, Pugh displays all the curiosity, boredom and rebellion of any teenager. Why should this young bride escape the trials of adolescence simply because she is thrown into adulthood a little too early?

Also read: How They Did It: Seamless Stunt Work and Smartly Drawn Shot Lists Fueled The Mountaintop Sequence in Midsommar

Katherine’s new lifestyle comes with ample milling about in beautiful dresses which mask painful corsets and uncomfortable crinolines. Pugh describes how the ornate costumes informed her performance: “I wanted her to play dress up, even when she was bored. It’s all a bit childish. Everything’s perfect when she’s in this dress—I think that’s her perception of how she’s supposed to be. But when she’s in her nightie, she’s just a girl. She’s slumped over, and she looks like a kid. The costume helped so much.” 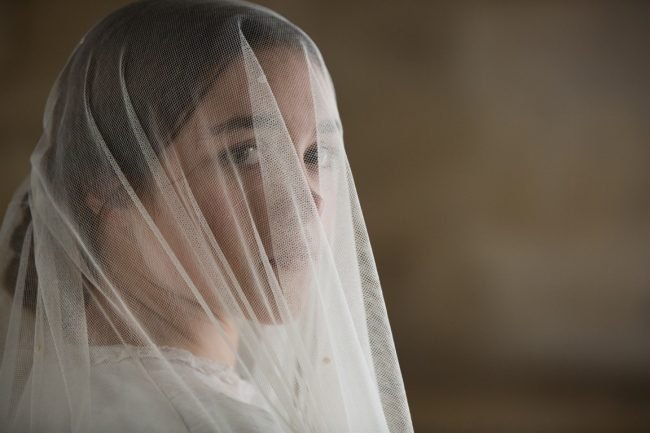 With the film’s grim turns, Katherine could make for a hard protagonist to root for. Pugh relates this narrative tightrope: “She has to be accessible. She has to be someone that we want to recognize.” Katherine’s impotent husband, Boris (Christopher Fairbank), never lets his shortcomings in the bedroom get in the way of the psychological torment with which he maintains his waning mastery of the house. Pugh explains how an early scene, shortly after their marriage, builds necessary empathy for Katherine: “She’s told to take off her clothes, and then he doesn’t do anything. That’s so horrible, and we all love her in that moment straight away. We watch her deteriorate. So when [the violence] starts happening, you go, ‘Yeah, fuck it. Of course she’s allowed to [do that].’ Either she does this, or lives the most horrendously boring and dull life.” Florence Pugh attends the U.S. premiere of Lady Macbeth at Sundance. Photograph by Jonathan Hickerson, courtesy of the Sundance Institute

With her acting resume quickly building (upcoming projects include Fighting With My Family, directed by comedian Stephen Merchant, and Jaume Collet-Serra’s The Commuter), Pugh is at the cusp of the varied artistic career she’s always dreamed of. She thinks that she would like to direct at some point, because she’s “quite bossy”—though she’ll “need to learn a little more about it.” MM

Buying What He’s Selling: Michael Showalter on The Big Sick and His Transactional Approach to Storytelling
The Trip to Spain: Michael Winterbottom, Steve Coogan and Rob Brydon Return With The World’s Unlikeliest Buddy Film Franchise