How They Did It: Shooting a Flashlit Prison Horror Movie, Against the Night, on the Sony a7S 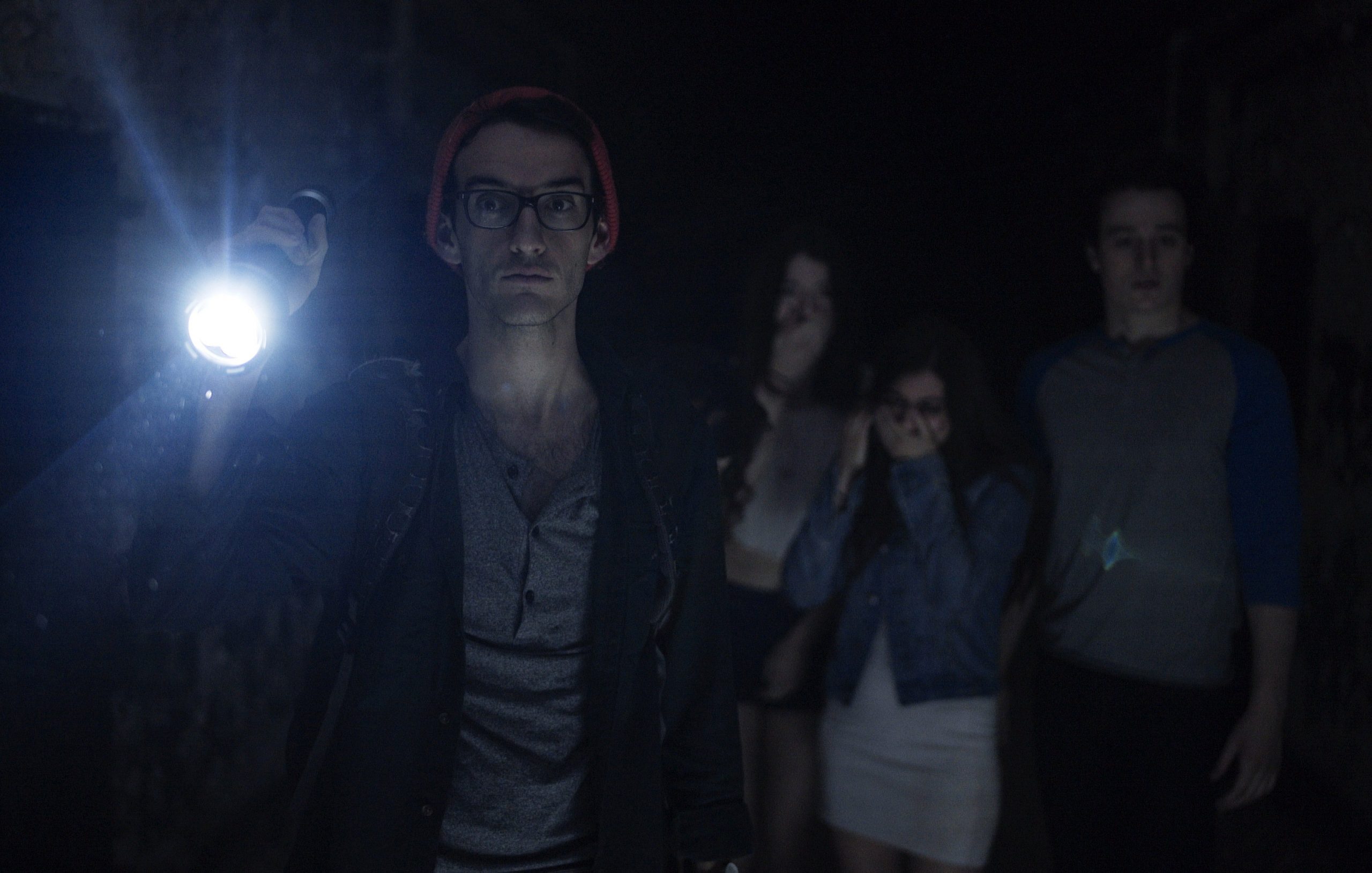 From conception, my feature Against the Night, about a group of friends who sneak into an abandoned prison, was always going to be a down-and-dirty movie.

We cast all local actors, and I was going to shoot it myself to keep the energy up and the budget down.

Because of the low-light aspects of the film, I never really considered another camera besides the Sony a7S. I had seen enough camera tests on Vimeo to get a feel for the latitude, and had always envisioned doing something that was not only cost-effective, but something a studio movie wouldn’t let you get away with: namely, shooting with only flashlights.

I’ll be honest—we cheated a little bit with one LED panel light for the scenes that were intended to take place in complete darkness. That didn’t come without its own set of challenges, however. Trust the hype, flicker is a real problem—and we would have been in real trouble without the Flicker Free plugin for Adobe After Effects. This did add some extra time to the post schedule, but it we only needed to do work on about 15 percent of the shots.

The first time I took a tour of Eastern State Penitentiary in Philadelphia—a historic former prison that’s now a U.S. national landmark—I thought the place was begging to be the set of a horror movie. The hub-and-spoke Gothic architecture and decaying walls were scary enough; the only thing that was missing was the human experience (oh, and a script and all that other stuff).

When I cracked the story, I went on several scouts to flesh out the screenplay and start the permitting process. I found that filming inside the Penitentiary was pretty much just as difficult as filming inside the Philadelphia Art Museum—“no running” was among the many ground rules. This seemed like a tough sell for a horror movie, since having my characters “power-walk” away in fear wouldn’t really work for this project.

Fortunately, Amy Cutler, Philly’s best location manager, suggested Holmesburg Prison. Not only was Holmesburg another abandoned hub-and-spoke prison in the same city (in operation until 1995), it was much more film-friendly than ESP, and film-ready! There were no exit signs above every door, no placards hanging on the walls; just chipped paint and splattered blood from another movie that had been shot there (…so we were told).

First, I consulted with our producer, Arielle Brachfeld, as well as co-producer Hank Braxtan and cinematographer Will Barratt, who shot all the Hatchet movies and the 2010 feature Frozen (the ski-lift one, without Olaf). Will even came in and did a day of second unit for me when we had a big effects day with actor Frank Whaley.

There are only two scenes in the film for which I used a tripod. The rest of the time I used a SHAPE Cage and a SHAPE Offset Shoulder Mount for the Sony a7S, with counterbalance weights to make the shots seem like they were floating, not shaking.

I used only one Rokinon 35mm T1.5 Cine DS lens. Even my sound guy—Rob Zogby, who is an all-around filmmaker in his own right—thought I was crazy. Rob often encouraged me to change the lens or to use my matte box or follow focus, but I didn’t have the heart to tell him I had neither. In retrospect, I wish I had used a matte box—some scenes have a little too much flair for my taste, but I was perfectly happy riding the barrel on my own. Who has time to switch lenses, anyway?  The aperture range really let me push the camera as far is it could go and any grain that’s in the film is there on purpose.

I used an Atomos Ninja Assassin 7.1″ 4K monitor, which I also recorded to, and an Israeli Arm to position the monitor right in front of my face, so I could see myself missing focus over and over again. Some scenes are even a little more lit than I would have liked them to be, because it was just too hard to hit my marks in low light.

The entire camera department consisted of film students. Nick Furer was our DIT from Drexel University who helped me feel confident that we were actually making a movie. Christian Buffo was my gaffer from Temple University, and we really hit the jackpot with him. Not only does he have a great eye and improved most of my setups, he was patient enough to “Hollywood” (i.e. hold by hand) the light panel everywhere we went. I don’t think we even had a light stand on set.

Actor Frank Whaley as Detective Ramsey in Against the Night

When Your Lighting Team is Your Cast

The rest of the lighting team was the cast. They were patient enough to repeat takes for me as a director and a cameraman, and they also literally lit every scene. As natural as I hope it comes across in the movie, this was a challenge in every scenario. Simply pointing a flashlight at another actor isn’t a great way to light someone. It was a constant cat and mouse game with the prison walls to get just the right amount of bounce without it appearing as though the actors were one step away from putting some diffusion on a flashlight, pointing it at the ceiling.

I’m sure you’re dying to know what kind of flashlight we used. It was a Husky “1000 Lumen Virtually Unbreakable Aluminum Flashlight” (the actual name). It’s the best film tool you can buy at Home Depot for $20. And I believe it to actually be unbreakable. (We tried). Christian was always by my side, toying with where the flashlight should be pointed while I talked through the scene with the actors. There’s no doubt it was a challenge, but once we got into a rhythm it was really fun to discover what we could do to make something a little creepier. If there was a group of characters in a scene, we would play with how many of the flashlights should face a certain direction and when it was appropriate to confront someone with a beam of light dead on.

Whenever anyone was outside they were under the sodium vapor lights of Philadelphia, which was fun, but didn’t give a lot of latitude in post. Our color timer, Michael Banks, worked a lot of miracles but when we played with the street lights we just kept getting pushed back to where we started. The lesson learned there is to just embrace it, especially since sodium vapor lights are disappearing from cities every day.

The other huge factor in this movie is the film within the film. Found footage has gotten a bad name over the years. Although none of the footage in this movie is “found,” I believe it can still be a great technique to help tell a story. I made a documentary about climbing Mt. Kilimanjaro where the host was using a handycam as a personal diary, and I don’t recall anyone referring to it as found footage. (Did I just come up with another idea for a movie?)

For the “found” footage in Against the Night, we used the Sony FDR-AX53 4K Handycam. It’s the best 4K camera with night vision on the market, and this movie truly couldn’t have happened without it. There is much to be learned in the world of consumer night vision. For instance, sometimes you have to cover the infrared light because you’re just seeing too much. Blood doesn’t show up especially well in night vision. Without too much of a spoiler, we did encounter some of these issues. It seems as though anything that’s white might be a better alternative for those scenes. In some cases, we resorted to shooting the image clean and color-correcting it to “night-vision green” in post.

In the end, there was a lot of trial and error to get the right set-up. Yet the prep we put into it paid off and allowed us to shoot extremely quickly. We were done with principal photography in just under one week, and the reception that the film has been getting is tremendous. I don’t think anyone on set looked at the film student standing next to me, holding a panel light, and thought that the film would end up playing in New York and Los Angeles… and here we are. It couldn’t have happened to a better crew and cast (or rather, actor-gaffers). MM

Against the Night opens in theaters September 15, 2017, courtesy of Gravitas Ventures.

Distribute and Conquer: How the Director of "2500km" Landed Her $500 Short Film an HBO Premiere
How They Did It: This Cinematographer Shot and Survived Explosive Wildfires For The Netflix Doc Series Fire Chasers