Flash Forward: Maya Erskine on Her Unlikely Meet-Cute with Comedy and Finding an Authentic Rhythm in Plus One 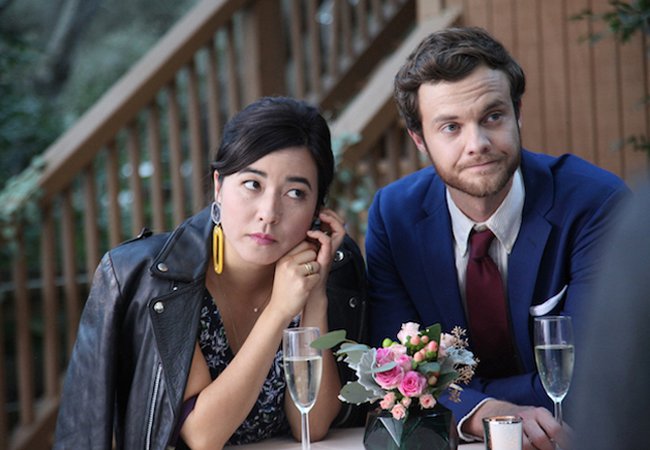 “Comedy is very rhythmic,” Maya Erskine says, carefully calibrating her comedic process in Jeff Chan and Andrew Rhymer’s modernized romantic comedy, Plus One. “I compare it a lot to jazz music.”

The very funny Erskine, in this regard, is a real Ella Fitzgerald, gracing the screen with a comedic presence that is equally irreverent and down to earth. Although she “never thought of herself as funny or was interested in comedy” growing up—avoiding traditional comedy stepping stones like UCB because it “scared the shit out of [her], frankly”—Erskine did grow up in a jazz-infused environment with her dad, a professional jazz drummer.

“Jazz is improv. It’s all about listening, it’s all about playing off of each other… rhythm and feeling the person,” Erskine says. “With comedic timing, I don’t think it’s something that I think about, or try for.

“Sometimes in theater there would be something where [you] wait a beat—wait one more beat and say it. And it would make all the difference in the world.”

Erskine’s love and skill for acting developed organically in theater—her first “big role” as the-not-so-funny Maria in West Side Story when she was a kid. Climbing the ladder from her humble beginnings as a Shark on stage, Erskine’s career gradually developed in comedy with smaller bit parts in television comedies like FXX’s Man Seeking Woman and HBO’s Insecure.

From there, Erskine started to nestle deeper in her comedic niche, eventually rubbing shoulders with SNL alums; starring in the Amy Poehler directed Wine Country, as well as starring in and co-writing The Lonely Island produced hit Pen15.

“I was drawn to people like [Chris Farley and Gilda Radnor] because they were such great character actors and good at becoming other people so authentically,” Erskine says. “It was so funny, and it felt like it was coming from a place of pain. There was a depth to it, and that’s what I was drawn to.”

The authenticity Erskine admires is apparent in her own work, especially with Plus One’s Alice—a hapless romantic who clumsily falls for her longtime friend, Ben (Jack Quaid), during their originally platonic plus one date pact for a tour of friends’ weddings. Within a traditionally straight-forward rom-com structure, Plus One finds a unique voice in humanizing its leads. Alice and Ben are relatable, human characters, navigating the romantic landscape in an intrinsically grounded, perfectly messy way.

Maya Erskine and Jack Quaid play long-time friends Alice and Ben in Plus One. Image courtesy of RLJE Films

Part of Plus One’s charm is its multiple-wedding structure, contextualizing the anxiety of finding “a one, any one” in a period of life where everyone is seemingly ahead of the game. Ben personifies this idea, always looking for his next fling, whereas Alice isn’t so caught up in this particular pursuit. When they inevitably fall for each other, Alice does so in a genuinely endearing way.

As Erskine puts it, “it’s a really authentic portrayal of two friends falling in love.”

And it’s through Erskine’s performance that the development of their relationship feels nuanced and realistic; an eccentric, comedic authenticity that gives Alice a relatable, broken depth.

“The [Plus One] directors were so open to letting the actors have a say,” Erskine says. “It was a full-on collaboration that has kind of spoiled me, because that’s how I want to do it always. If I didn’t have a hand in the writing then I want to have a voice.”

Erskine is starting to exercise her written voice more, most notably with Hulu’s now Emmy nominated Pen15, which she co-wrote and co-created alongside Anna Konkle and Sam Zvibleman.

“Writing has opened up all these new worlds for me,” Erskine says. “I love collaborating and that’s the biggest thing I take away from it, so I hope I can direct still, and act, and just create work.”

And create work Maya will, with Pen15 renewed for a second season, as well as her upcoming project alongside Seth Rogen, An American Pickle, the directorial feature debut of longtime Rogen cinematographer Brandon Trost.

If there’s anything to learn from Erskine’s professional trajectory, it’s that a little nuance and authenticity go a long way for an actor, especially comedically. Not unlike jazz or falling in love, it’s all about finding that rhythmic feeling from within.

“I just try to be honest in the moment, and sometimes that can create interesting timing, because some of the funniest shit I’ve ever heard is pure cadences from people being themselves and saying something in a way I’ve never heard. It’s all about rhythm and feeling the person.” MM