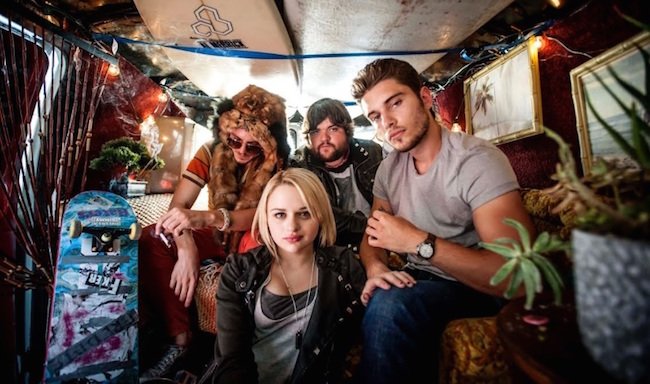 A billion years ago, some hotshot producer read my script about hat manufacturing—or most likely, he didn’t read it—and set it aside, dismissively advising me to “write what you know.”

But the more I thought about it, the more I knew he was right. I was a first time writer/director—for features, at least—and what do I know about hat manufacturing? My real story was more interesting than my fictional narrative.

“Damnit,” I cursed to myself, as I realized the schmuck was right.’

Looking back, I still don’t necessarily agree that writing what you know is the key to success as a beginning writer; however, I can say with full certainty that the one film I’ve been able to get producers to sink their teeth (and wallets) into was based on a wild night in my teenage years. This is my feature Smartass.

There are many ways to shepherd your script to the screen. With little to no funding and a big, charming smile, you can whip up an army driven by enthusiasm, and you’ll be shocked at what you can accomplish with a few dirty kids and an attic full of filmmaking junk (hell, even an iPhone—see Tangerine). If you consistently deliver on your promises, this type of filmmaking can go on for years. You will reach a few festival screens and maybe even go around the world (I did)—but in the pit of your gut, you know that in order to do it right, you need money! You need a budget, a team and an infrastructure that you’ve fought hard to withstand. Now, though, you need to give in and focus on the creative—not just run around the streets with a GoPro.

The financial side of the entertainment business, particularly in independent film, is frightening, overwhelming and insert-aggressive-adjective-here-inducing. Going into the fundraising process on Smartass I knew very little, and as a writer, that seems to be the norm. To a writer, the process often ends with the producer getting involved and the project then moving into the hectic chaos of production. Oftentimes I’ll hear writers remark that they have no interest in the financing process or that production “isn’t for them”—I don’t blame them, but I soon learned during the Smartass financing round how crucially important these pieces are for the overall process.

When I met my producers, I was working as a production designer on a network reality show about the Amish lifestyle. (Note to all aspiring writers: It’s hard to convince someone—especially a producer—that you are a writer when you’re hanging pigs from a barn roof, building meth labs and blowing up buggies.) But this is the entertainment industry, after all, and you’ll find a way to make it work! Hell, I was able to connect with my producer, negotiate a budget figure, and set out upon pre-production discussions within a few short months.

I got lucky in that I was able to meet a producer who had access (direct access—not the “access” that so many film producers claim to have) to greenlight a production. Better yet, the producer was looking for an edgy, female writer/director project to get off the ground. The serendipitous nature of film is often incredible.

There are long lulls of time where you wonder if the project will ever get made, if anyone will take an interest, and if you will actually have something produced as a writer. And then, bang, one day later you’re in deep negotiations for ownership of the project long-term and how best to situate the investment to protect the producer. What a ride.

As we began these early discussions, it became apparent we were making a real movie. I had made dozens of low-budget projects, but up until that point I’d only ever written and directed projects with roughly $5,000-and-below budgets. The budget for Smartass ended up being less than a million dollars, which was enough to give us a big-budget feel and attract the kind of talent that we needed, both in front of and behind the camera.

The prep period as a writer is stressful, no doubt about it. You’re working to fit your vision (especially if you end up directing as well) into a pigeonholed number that has little—if any—flexibility. All the while, you’re being tasked with rewrites and adjustments to the script, as well as location, cast, and shooting realities (shooting a film in 18-20 days is extremely difficult).

Yes, L.A. is the entertainment capital of the world, giving you access to a deep pool of talent, but also pitting you up against the bigger guys (projects, producers, money-men, locations, etc.) immediately. As the hard prep (physically beginning the process of setting a hard shoot start date) began, I realized that the line producer was my biggest ally—something I hadn’t heard many other writers says—because it allowed me not to have to handle 15 jobs at once. Instead, I could focus on the creative process of getting the script picture-ready, making casting decisions and leading the team as I needed to as the director.

A still from Serbu’s feature, Smartass

Production itself was a whirlwind—both good, bad and impossible. As a writer and first-time feature director, it was a challenge balancing the storytelling in a nonlinear way, in addition to the general pumps that come along with principal photography.

Shooting a film out of order after having written it very precisely is a difficult learning curve and it taught me a lot about the writing process in terms of fully fleshing out character, structure, and overall tone.

As production came to an end there were a lot of emotions. It’s true what they say: Filmmaking brings people together in a crazy close way. Eighteen shoot days later and I learned about union regulations, set protocol, overtime pay structures and how to diffuse situations on my feet in real time —because let’s face it, there isn’t much time to ponder during a low-budget indie film shoot.

Heading into the edit, I realized that another film cliche is dead accurate—there are three films you make: the one you write, the one you shoot and the one you edit. I had the privilege of controlling each of these processes with my producers and was able to see the vision through from start to finish.

Looking at the (nearly) finished film we now have in our hands, I am excited to begin showing it to the world. It is a feat to bring a film to the screen, especially in such a changing feature film landscape. Smartass has now been submitted to several marquee festivals, discussions with international sales agents have well begun and the premiere has been set for early 2016.

Finding the right producer isn’t just about finding the right money-man, but also about finding a partner who truly believes in the blind faith that is independent filmmaking. My producers ended being tremendous resources in regards to not only getting the project made but also, now, working with top tier sales agents and talent agencies to discuss how best to get the project out to the world. As a writer and director, my job has become more of the day-to-day oversight of the creative elements—branding, marketing, imagery, etc. My producers have allowed me this freedom, given that they are so hands-on with the process of getting the film into the world.

As a screenwriter, the biggest take away was simple: tenacity. Tenacity at every turn enabled these real life events to become a fully fleshed-out screenplay, patch-able to a producer, produce-able as a film and now heading out into the world for a life of its own. Tenacity—the principle I started with at the earliest stages of my screenwriting adventures—proved to be the most valuable. MM

Fighting Death, of Cinema and Humanity: László Nemes and Géza Röhrig on the Blazing Son of Saul
Human at the Seams: Charlie Kaufman and Duke Johnson Make Yearning Tangible in Anomalisa