First Draft: Know When and When Not to Rely on the Unreliable Narrator

The unreliable narrator. A tricky figure whose credibility as an audience guide is seriously undermined—usually in service of a good twist. When unleashed properly, the unreliable narrator is one of the most effective devices in storytelling. It’s a device that will never go out of style because it gets at the heart of human nature: Aren’t we all unreliable narrators in some shape or form? Subjectivity and bias—and even our own mental and emotional health—will always paint the way we, in real life, will tell a story.

The reason it can work so well in film, however, has less to do with its relatability and more to do with drama. It’s the perfect tool to entertain an audience. Suspense, misdirection, manipulation – these are all things that an unreliable narrator can provide, leadings to twists and turns and, if done right, a shock of an ending an audience won’t see coming. Some films unleash their unreliable narrators to masterful effect—Rashomon, The Usual Suspects, and Fight Club, ​to name a few. But where do other, less successful films go wrong?

Me and Earl and the Dying Girl vs. Atonement and The Perks of Being a Wallflower

In an otherwise well-made film, Me and Earl and the Dying Girl resorts to gimmicks by employing a narrator that compromises his credibility in a cheap and disappointing way. Greg, the protagonist, assures the audience multiple times that the cancer-stricken girl he befriends, Rachel, isn’t going to die at the end of the story. As the audience understands that Greg is telling this story from the future, they are naturally prone to believe him. And yet, Rachel ends up dying. Greg lied to himself and to us. One could argue he lied to himself as a way of coping with the loss, but the film has a hard time sticking the landing. This makes his unreliability as a narrator come off as arbitrary, rather than natural. And that arbitrariness translates to gimmicky.

Let’s look at two films that offer a more compelling form of unreliability: Atonement and The Perks of Being a Wallflower. In Atonement, Briony Tallis gives us an ending that we later learn didn’t really happen: she tells us that two characters happily end up married when actually they do not (so, yes, she too lies to us). But for Briony, her decision to do so stems from her suffering tremendous guilt over many years. By relaying an ending that actually didn’t happen she is, in a sense (hence the title), trying to atone for a mistake she made as a young girl. A rash decision she made as a 13 year-old – accusing someone of a crime he didn’t commit—because of something she was too young to understand, forever changes the course of a number of lives. It’s something that haunts her into old age—and one that makes her decision to lie to us more understandable.

The Perks of Being a Wallflower, which shares more in common with Me and Earl and the Dying Girl given the high school setting, also tackles heavy subject matter. The script is told from the point of view of Charlie, who suffers from depression, mental breakdowns, and—we find out later—suppressed memories. These suppressed memories (of his late Aunt sexually abusing him) are what fuels his anxiety and, in turn, the way he relays his story.

This is all to say that the climaxes of Atonement and The Perks of Being a Wallflower both feel earned. The ending in Me and Earl and the Dying Girl does not—rather, it feels cheap. In the other two films, the lying and unreliability of the narration is understandable and sympathetic rather than manipulative for the sake of a third act twist.

Not Planting Your Seeds

Secret Window vs. The Sixth Sense

The 2004 thriller Secret Window has its fun moments but the weak handling of its unreliable narrator makes those fun moments all for naught. The script centers around Mort Rainey, an author who struggles to overcome his writer’s block while being terrorized by a strange man who claims Mort stole his story. Spoiler alert: turns out this man is a figment of Mort’s imagination – Mort’s been terrorizing himself this whole time. But, even if you haven’t seen it, it’s not much of a spoiler as this is a “twist” you see coming from a mile away. The script doesn’t plant its seeds as well as it could have, making the ending fizzle out.

The Sixth Sense, on the other hand, is a thriller that does a much better job at planting seeds. Where the reveal of Mort’s multiple personalities in the third act of Secret Window seems a bit random, the idea that ghosts may be haunting the living world is something that is planted in the very first act of The Sixth Sense. So when it’s revealed that Bruce Willis’s Dr. Crowe is in fact dead and doesn’t know it, the twist makes sense. It doesn’t come out of nowhere and, ironically, that’s what makes the twist all the more satisfying. His decisions and unreliable narration throughout the script are justified because of those earlier planted seeds. There isn’t much justification for Mort’s actions and ultimate sickness because there’s no support for it in the previous scenes.

The Girl on the Train vs. Gone Girl

The Girl on the Train’s unreliable narration stems from protagonist Rachel’s alcoholism and blackouts/memory lapses. Gone Girl devilishly plays with perception as its narration bounces back and forth between wife Amy and husband Nick. Amy’s narration is compromised as she is creating a story to cover her tracks. Nick’s narration is also unreliable, as he’s hiding a secret (he’s having an affair) that, if found out, would only heighten everyone’s suspicions that he murdered his missing wife. Despite bouncing from two different points of view, the script doesn’t slow down because they’re both telling the same story: we’re watching Nick navigate through the world that Amy’s unreliable narration has created.

The Girl on the Train tries to similarly trade off on unreliable narrators. But when we leave the head of our protagonist, things become less interesting. The script’s handling of multiple storylines makes things unnecessarily complicated and convoluted, weakening the general narration overall and making things move at a glacial pace. It’s a shame because an alcoholic forced to fill in the pieces from her drunken black-outs makes for an intriguing mystery and narrator. 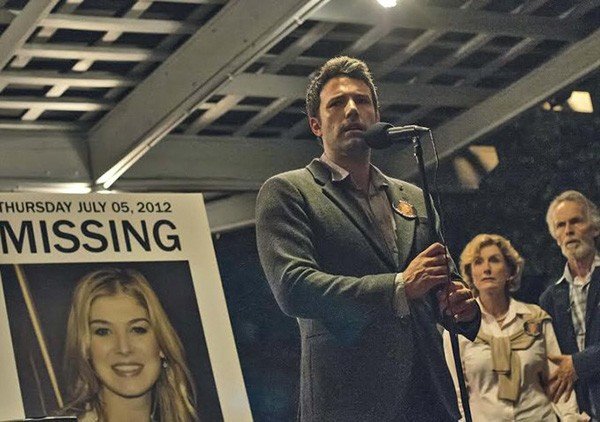 While Gone Girl may not seem simple on the surface because of its double narration, it in fact is at its core, which is why it works. The Girl on the Train tries too hard to add more and more layers to over-complicate an otherwise simple plot. Rather than intermittently cutting to two other characters, the script should have stuck with Rachel’s POV as it is Rachel’s story—the way Gone Girl sticks with Nick and Amy, because it’s their story. Rachel’s unreliable narration would have been enough.

The unreliable narrator can clearly be handled well in different ways. If the script is going to let us know right off the bat that the following narration may be compromised, there needs to be a legitimate reason for it—no gimmicks. If the script elects to wait until the end to reveal that the narration we’ve just been given has been misrepresented, the script’s needs seeds planted that justify the character’s actions when looking back. And, finally, keep things simple at the story’s core—the character him/herself should do the rest of the work. MM

First Draft: Spec Scripts That Sold for Millions, But Were Never Made
First Draft: Three Networking Maps That Will Help Screenwriters Build Their Industry Contacts