First Draft: Learn to Write a Satisfying Third Act from Return of the Jedi

In partnership with the blog ScreenCraft, “First Draft” is a series on everything to do with screenwriting.

One that fared well, for the most part, is Star Wars Episode VI: Return of the Jedi. Debates still rage on about the film’s tone and use of Ewoks, but when it comes to its plotting, no one really has a problem. That’s because the screenplay, written by Lawrence Kasdan, manages to weave together such an intricate tapestry that one can’t help but be awed. It not only manages to plot out a satisfying third act, but a finale for the trilogy that hits most of the right notes where it counts. Plotting-wise, it couldn’t be any better.

So, if you’re having trouble figuring out how to weave all of your plotlines together, look no further than Return of the Jedi. We’re going to look at how it takes three distinct plotlines and gives them all important roles to play in relation to each other.

What’s the set up? The second Death Star is being constructed above the forest moon of Endor. The Emperor is on board, so the Rebel Alliance wants to destroy it before it’s operational, in order to take out two high profile targets with one operation. Meanwhile, Luke Skywalker is going along because he wants to try to convert Darth Vader back to the light side of the force — and daddy dearest is on Endor too.

How are they going to accomplish their goal? Well, the Empire learned from the first Death Star failure and set up a shield generator on the moon’s surface. 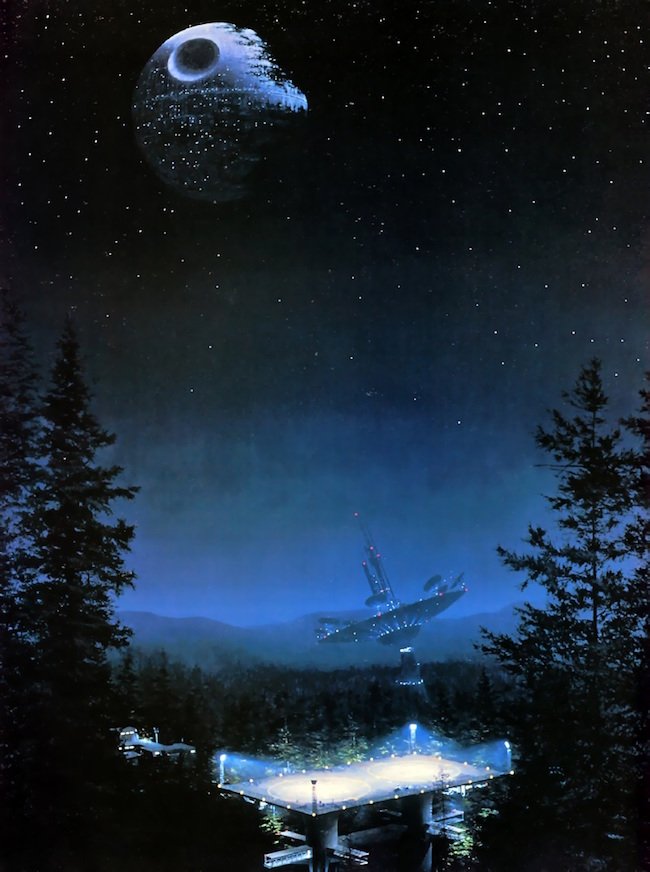 If the good guys want to destroy the new Death Star above, they have to blow up the generator on the surface first. The operation breaks down into three plotlines, layered on top of each other:

Plotline 1: Han, Leia and Chewbacca lead an attack on the shield generator’s lightly guarded back entrance. Once they destroy it, that’ll open up a hole for —

Plotline 2: Lando, Wedge and the entire Rebel Alliance to attack the Death Star from space to destroy it. But if they do, that will kill —

Plotline 3: Luke, Vader and the Emperor aboard the Death Star. Luke is there to save his dad, while trying to take down the Emperor.

The way the plotlines are layered, if one goes badly (or succeeds) the next is directly affected. Kasdan plays the plotting beautifully here, because he knows exactly what complications to throw at our heroes to make everything go to hell.

What are those complications?

Plotline 1’s Complication: The back entrance wasn’t nearly as lightly guarded as Han’s group hoped. They get captured, so they can’t blow up the generator on schedule.

Plotline 2’s Complication: The Death Star is still impenetrable when the rebel fleet arrives. Not only that, but they get ambushed by a fleet of Star Destroyers keeping them from retreating because — surprise! — that Death Star is actually operational and starts blowing the rebel fleet up.

Plotline 3’s Complication: Luke’s confidence that the rebels were going to win the day is shattered. The Emperor knows this and starts taunting Luke so he gets angry. Luke gets so pissed, he starts to think that the only way to save everyone is to kill the Emperor outright. He tries, which leads him into a lightsaber duel with the Emperor’s protector, Darth Vader. Thus, Luke ends up locked in a fight to the death with the very guy he came there to save.

The beauty of the plotting here is that in every story the worst possible thing happens to our heroes. Right now their goals aren’t just unattainable, but in some cases they’ve found themselves accidentally working against them. If the writer did his job right—and Kasdan did—at this point the audience shouldn’t be able to see any way for our heroes to win the day. But they do because—

Plotline 1’s Resolution: The previously established force of Ewoks surprise attack the Imperial troops, giving the Rebel strike force a distraction they take advantage of. They manage to blow up the shield generator—

Plotline 2’s Resolution: Which gives the Rebel fleet a hole they can punch through. A group of fighters led by Lando fly into the Death Star and blow up the power generator. But that endangers—

Plotline 3’s Resolution: Just as Luke is about to kill his father and turn to the dark side, he pulls back and realizes the Emperor is luring him into the same emotional trap he came to save his father from. Luke chooses the light side and throws down his weapon, so the Emperor decides it’s time to bring out the deadly Force lightning and turn Luke into a Cajun-style Jedi. Moved by his son’s pacifism, Vader kills the Emperor to save his son. Vader is redeemed and the Emperor is gone. Luke’s mission is accomplished.

The last bit of tension with the resolution follows Plotlines 2 and 3. Both Luke and Lando’s parties have to escape the Death Star before it blows up, which they manage to do at the last possible second.

The layered action here really works because it allows for tension on multiple levels. Each plotline isn’t just an action scene. There’s an objective at play that must be accomplished in order to affect the next layer’s plotline. A complication in one plotline means a complication for all, and that’s how you get the most drama coming into your third act. If you’ve set up everything correctly, resolving one complication creates a cascade effect of success that will allow your characters to pull victory deep out of the jaws of defeat. MM

Ashley Scott Meyers is a screenwriter and podcaster at SellingYourScreenplay.com. He has sold and optioned dozens of scripts over the last two decades. Through SYS he runs a screenplay analysis service, provides paid job leads to screenwriters, and helps screenwriters connect with producers who are looking for material.

First Draft: Five Inspiring Ways Famous Screenwriters Got Their Big Break
First Draft: How to Gauge Your Screenplay’s Budget While Writing It