First Draft: Roll the Dice With This Guide to Action-Adventure Script Structure Based on Dungeons & Dragons

You’re deep in Act III right now. This is it. This is where you once again throw even more conflict at the characters, teasing the audience in the beginning of Room Four but transitioning back to high stakes—the highest of stakes.

Indiana and Marion are captured. The Nazis are in control of the Ark with no hope of our heroes reattaining it. And worse yet, the Nazis are going to unleash the power of the Ark of the Covenant—something that hasn’t been done for thousands of years. The greatest evil of our time is now in position of the power of God. There are no higher stakes than that.

“Maybe the true identity of the bad guy is revealed. New clues and information pertaining to a major plot arc might be embedded in the treasure, perhaps sewn into a valuable carpet, drawn in painting, or written on a slip of paper stuffed into a scroll tube or encoded on a data chip.”

All of the reveals are laid out in this fifth and final room, which represents the true final moments of Act III. Consider this the one final moment to shock and awe the audience. To make them say, “How can the heroes possibly survive this?“

Belloq, Toht, and Nazi Commander Dietrich perform an ancient ritual and open the Ark as the Nazi Army awaits. Indiana and Marion are tied to a poll as hostages and eventual witnesses to the power of the Ark.

The whole setup of the film’s story has been anchored by the power of the Ark of the Covenant—the question of “Is it folklore or real?”

And now we’re about to find out. As the Ark is opened, the power is unleashed. But it is not as the Nazis expected.

Angels of death escape from the Ark. A vortex of flame forms above the Ark and shoots bolts of fiery energy into the gathered Nazi soldiers, killing them all. As Belloq, Toht and Dietrich all scream in terror, the Ark turns its fury on them: Dietrich’s head shrivels up, Toht’s face is melted off his skull and Belloq’s head explodes. Flames then engulf the remains of the doomed assembly, save for Indy and Marion, and the pillar of fire rises into the sky. The Ark’s lid is blasted high into the air before dropping back down onto the Ark and sealing it.

Indiana and Marion are the only ones left standing. The Ark is later kept hidden within the confines of a giant government warehouse among countless similar crates. 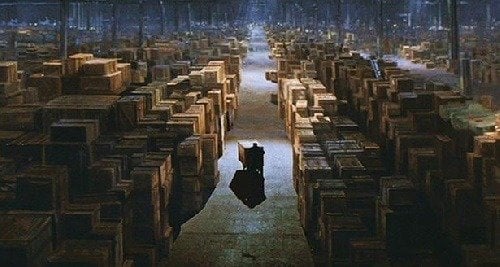 You can utilize this unique and quite simple model that geeks, nerds, dungeon masters, and game masters alike have taken advantage of to create ultimate action and adventure in their own storytelling campaigns.

And with the example of placing this model over the layout of one of the greatest action adventure stories to ever grace the big screen—Raiders of the Lost Ark—you’ll quickly see that it does in fact mesh well with the three act structure and the overall art and craft of screenwriting. MM

First Draft: What Are Your Protected Rights as a Screenwriter?
First Draft: Spec Scripts That Sold for Millions, But Were Never Made