A Kingdom of Thrills and Magic: Inside the 2016 Edition of Emerging Genre Mecca FilmQuest 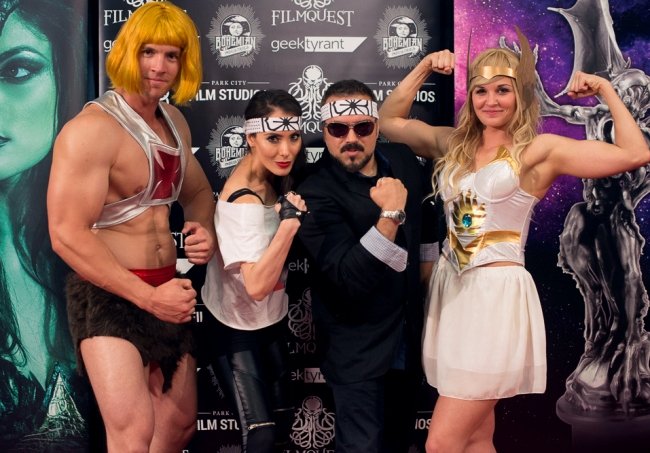 Led by Cthulhu, creatures from all realms—fantasy, horror, and science fiction—descended onto Utah’s vast landscape and made their way to the screen at FilmQuest, which ran June 17-25, 2016.

A young but increasingly influential genre fest, FilmQuest is one of largest film events in the state (second only to Sundance Film Festival in Park City). Embracing the entire spectrum of cinema unbounded by the norms of reality, the festival, now in its third edition, has quickly garnered impressive buzz around it and the films it screens. This speaks to both the quality of programming and the fervent efforts of Festival Director Jonathan Martin and Assistant Festival Director Jonna Jackson to create an experience unlike most on the festival circuit.

Perpetually energetic and fueled by an all-consuming hunger for discovery, Martin, a moviemaker himself, has, through aggressive marketing efforts and integrity in his programming, settled his kingdom in Sandy, Utah at a colorful theater complex known as the Jordan Commons Megaplex—a more-than-suitable venue for a gathering of this kind.

Aside from screening dozens of films of all lengths, an array of themed celebrations cap off each day at the fest, with activities ranging from laser tag and bowling to karaoke-centered shindigs. One singularly exciting night presented a space-themed rock opera called Space Venture Coalition inside one of the theaters, making clever use of the built-in screen; the audience was treated to a handful of short films prior to the live performance.

Subverting expectations about the type of films you’d imagine playing at a genre fest, Jon McDonald’s Muddy Corman, a retro comedy that channels Wes Anderson’s stylistic signature, opened the festival. Starring Kevin Corrigan and newcomer Luca O’Keefe, this tale about an art school in dire need of a football team to receive financial incentives showcased meticulously arranged framing and production design. Enticing in its visual composition, the film is a crowdpleaser that could easily secure further festival presence and eventual distribution, given its accessibility and excellent aesthetics.

Largely comprised of short films, FilmQuest’s program offers an extensive selection of both live-action and animated titles. Some of the most inventive and satisfying storytelling came from short sections. Boasting daring comedic chops, “How Deep Can I Go?,” a music video by Australian creator Kai Smythe (a.k.a. Hairy Soul Man)  was one of the most accomplished blends of content and execution showcased. This morbidly delightful piece pairs a soulful tune about a psychopath expressing his love in gut-wrenchingly passionate manner with handcrafted cardboard sets and props that accentuate its irreverent tone.

A still from Kai Smythe’s music video “How Deep Can I Go?”

Similarly ingenious, though veering toward the more serious side of darkness, Mark Tapio Kines’ “20 Matches” delivered an outstandingly effective story about an Austrian serial killer. Its economical approach saw actress Nina Rausch in a dark room narrating the atrocities committed by this killer in 20 segments, illuminated only by the light of the eponymous 20 matches. Unnerving and brilliantly conceived, this one is a hard-to-shake gem.

Slasher flicks were properly represented thanks to Ryan Spindell’s topnotch short “The Babysitter Murders,” which juxtaposes scenes from what appears to be a classic slasher movie with the central plot, so that they inform each other fluidly. Twists galore plus striking cinematography and overall production value should make this a stepping stone on Spindell’s way to horror major leagues.

Laced with fantastical undertones, another terrifying entry was French/Luxembourger co-production “Quenottes” (“Pearlies” in English) by Gil Pinheiro and Pascal Thiebaux, in which the myth of the tooth fairy turns into a bloody and intense battle between a father and his son and an evil entity hungry for what’s rightfully hers. Stylized CG and solid performances create a nightmarish vision of a childhood staple.

Considering the immense number of shorts screened at FilmQuest (some in blocks, some before features) it’s hard to spotlight all worthy films, but here are a few other highlights that deserve a mention. Shot in Japanese with a cast that reflected the ethnic and cultural backgrounds of their characters, Jody Wilson’s “Indigo” stood out for merging sci-fi elements with an anime-inspired visual palette. Tackling immigration through the endearing relationship of a friendly Martian and a curious hotel housekeeper, Lee Citron’s “Martian America” was a tender crowdpleaser. Dystopian romance “Sing for Your Supper” by Mu Sun takes qualities of beloved musicals and applies them to a world resembling early films by Jean-Pierre Jeunet, where only good singers get to eat. Directed by Tanuj Chopra, “Teacher in a Box” is a black-and-white futuristic look at educational intuitions serving as training centers for corporations, with a cast almost entirely composed of talented women of color. Lastly, Kerry Yang’s lavishly cinematic “Genghis Khan Conquers the Moon” revisits the brutal Mongol leader’s campaigns with a clever twist that pushes his ambitions beyond the Earth’s confinement.

Among the set of features that took part in this emerging genre Mecca, the two documentaries in competition displayed the most originality out of the pack. By finding subjects existing at the edge of reality, these filmmakers constructed stories that transform nonfiction into much more ambiguous territory. Much like its spiritual companion piece, The King of Kong, Tim Kinzy and Andrew Seklir’s Man Vs. Snake: The Long and Twisted Tale of Nibbler follows Tim McVey, the first player to cross the one billion points mark on any video game, as he attempts to find purpose through his favorite arcade console decades after his glory days. On the opposite side of the tonal spectrum, Rich Fox’s The Blackout Experiments, which premiered at Sundance in January, is calibrated trip into the human psyche via a group of people who willingly participate in an experience known as “Blackout,” where they are psychologically tortured and forced to confront their own fears in extreme scenarios. Feature-length fiction works that made an impression included Bobbin Ramsey’s gory whodunit Dead Body, which avidly repurposes the “cabin in the woods” trope and packs a punch with a well-planted final reveal. Brazilian supernatural thriller The Fostering (O Diablo Mora Aqui) from Rodrigo Gasparini and Dante Vescio, benefits from cultural specificity to create a universally terrifying legend with historical influences.

To complement nine days of films, FilmQuest also organized a series of panels to discuss specific issues regarding representation on screen, as well as the value of techniques particular to genre films. The “A Woman’s Touch: Women in Genre Cinema” session brought together filmmakers Jody Wilson, Jill Gevargizian, Julie Hindkjaer and actress Sahna Foley to converse about the lack of female filmmakers being hired to direct tentpoles and their fight to be treated as equal members of the team on set. “Minorities in Genre: Past, Present, Future” departed from the recent Oscar controversy and allowed Yolanda Stange, the African-American president of Utah Women in Film, Asian-Australian actor David No, and Wilson again (this time because of her perspective as an LGBT filmmaker) to dish their opinions on Hollywood’s casting decisions and what this means in terms of honest onscreen portrayals. In the “Practical Effects in the 21st Century” panel a group of experts shared anecdotes and made a case for the relevance of tangible magic in the age of computer-generated effects.

Although most film festivals can’t be measured in jump scares, gallons of fake blood, believable makeup, screams, fantastical creatures and enthralling visual effects, FilmQuest is the exception. Catering to audiences and professionals whose preferred form of expression is often relegated to the sidelines at major film gatherings, Martin’s curated space helps genre films leave obscurity and reach the eyeballs they are meant for. Of course, this is not to say that, as it gets bigger, FilmQuest will stop being weirdly wonderful and true to its niche. It just means more outsiders will be dying to join in the fun. MM

Festival, Review Thyself: Review Site Film Fest Finder Lets You Be the Judges of the Circuit
The Film Festival Court of Controversy: How Festivals Moderate Discussions Before Films Reach Theaters