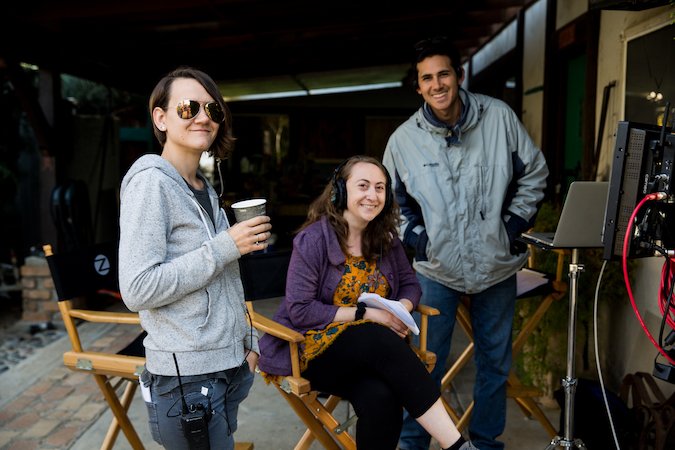 Liz Manashil is a feature writer/director/producer who is currently in pre-production of her third feature, Lady Parts. She lives in Los Angeles with her son, dog, and partner (in that order) and currently works at Picture Motion. In this essay she explores some of the questions her colleagues and friends have been circulating during lockdown about what film distribution in a post-pandemic landscape might look like.

Because of my time working at Sundance Institute in our Creative Distribution Initiative, this article I wrote with Rebecca Green, and the fact that I am the co-host of Making Movies is Hard!!!, I was asked by MovieMaker to break down my thoughts regarding the state of the industry and in the midst of a global pandemic. My thoughts are — to say the least — pretty chaotic. To be fair, the world of film distribution is always confusing, and I’m always looking at it from the vantage point of an indie filmmaker trying to break through. To sum up before we begin, right now, there’s hope for digital, but distress for theatrical. There’s sincere worry about the safety of productions, along with the excitement of potential true competition for Netflix in the streaming wars. Depending on the hour, I will fluctuate between excited and depressed (and that’s just about the state of film distribution!).

I’m breaking down this article in terms of questions that I’ve been asked a lot lately, and my responses in the tentative and insecure place in which I sit. Additionally, I just released my second feature Speed of Life. Being in the early quarters of my film’s release during a pandemic has given me a personal perspective on everything that impacts how I’m seeing the state of the industry. I’ve also had some informal conversations with other people in this space that inform my opinions here. Everyone is confused, everyone is speculating, and we’re all just trying our best. So let’s go through this in the timeline that a filmmaker would.

Will filmmaker grants disappear because of the pandemic?

As soon as the pandemic hit and we all really came-to regarding how serious it is, I started putting out this question to my friends who work in non-profit artist support to see if their organizations were pulling grant opportunities for filmmakers. Across the board I was soothed by the fact that because that money had been earmarked earlier for the support of artists, it would still be disbursed in that way. What a relief. I even heard of at least one organization that had a funder put in even more money, knowing that support for artists was even more in need at the moment. However, it should be noted that this is just for this grant cycle. But funding at the soft-money level can be planned long in advance. I do not have intel on whether future grant cycles will be affected by the pandemic or the sustainability of non-profit arts organizations that will no doubt be impacted by this major economic downturn. Government grants, trustees, individual giving, endowments and donations will all be impacted by what we’re going through.

We’re safe for now in terms of grants, but brace yourself for the future.

Of course, as indie filmmakers, we’re used to feast or famine (or… snack or famine). Plan your productions wisely and economically.

Now that you have the money in hand….

How the hell/ when the hell/ will we be able to get back on set again?

Wow. I wish I knew the answer to this question. I, myself, had a production planned with dates set for June, and we’ve just decided to push back until late summer.

Because I don’t have the answers on what indie filmmakers can do to greenlight productions (because this is a question that involves so many different stakeholders at the union and non-union level), let me break down how complicated a question this is and how vital it is for indie filmmakers. Indie filmmakers want to create safe sets and do not want to contribute to the spread of this virus. However, without a clear plan for working with SAG-AFTRA actors, our projects sit in no-woman’s land. (I also want to acknowledge that SAG-AFTRA’s website is a wonderful resource and offers some great safety tips here.)

So here’s the state of the industry for greenlighting production, a lot of questions and no answers (as of May 26, 2020):

All of these concerns are directly related to questions of how SAG-AFTRA will proceed — which may be clarified by the time you are reading this, friend. However, there are a gazilliion other concerns I haven’t even dipped into — especially insurance — but with liability and risk so high, how can we proceed without clear guidelines? Also, equipment! Most productions obtain equipment from multiple vendors — including individuals and warehouses. How can we safeguard that the actual equipment will not put operators in danger?

Apologies for contributing to your blood pressure today.

Speaking of a lack of productions happening right now….

Due to a moratorium on productions, will we be in a content drought? How will that benefit indie filmmakers?

I spoke at a Women In Film mentorship session a few weeks ago and was asked about a film’s chances, considering the content drought. The concept is that if films aren’t being made for a few months, indie filmmakers who have titles to pitch now may have a better chance at being acquired by a major platform. I responded to this inquiring indie creator rather cynically by saying that nothing ever benefits the indie filmmaker economically — a tenet I hold dear to my heart. However, after talking to an indie distributor more recently, I think I may have been wrong. He reminded me that though the drought itself may not benefit small indies like the ones I make, the streaming wars may. All those new SVOD platforms that need to find content are doing so to build data profiles on their audiences and compete with mainstays Hulu and Netflix. Acquisitions — as I mention later — occur fairly well in advance of a release. So, I don’t foresee a drought per se, as there was a lot in production right before this pandemic (and we will eventually find a way to produce content afterward). But there is a light at the end of the tunnel where more acquisitions will be made. Perhaps the shrinking slates of mid-level distributors that were present before Covid-19 will be able to grow due to growing acquisitions and license fees.