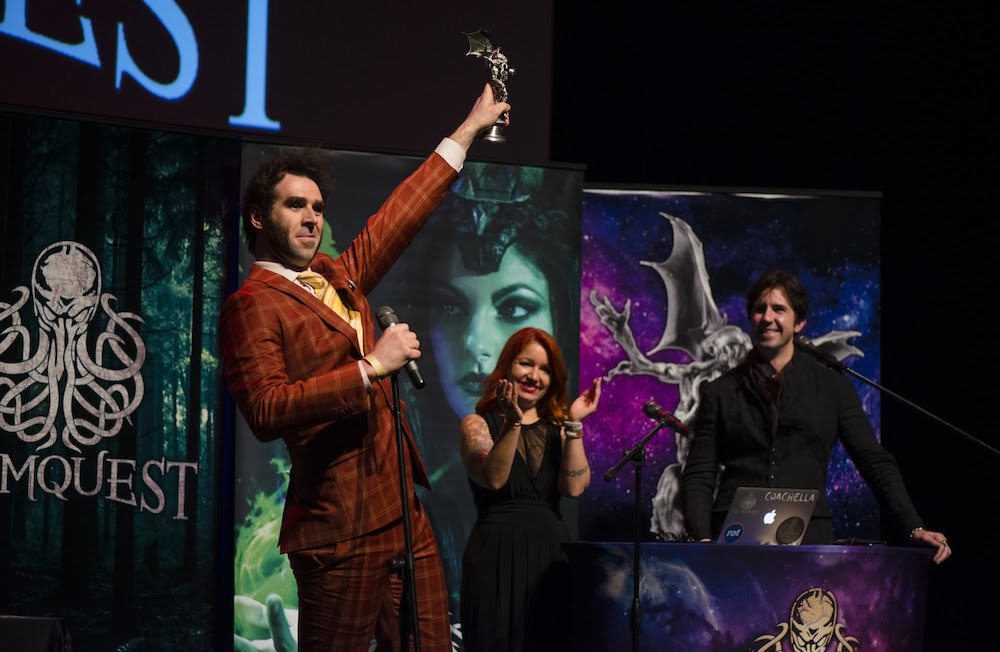 A piercing white patch of light trapped between pitch black sky, glowing ethereally against the silhouettes of a mountain-perched farmhouse and one twisting, leafless tree: That was the first sight that truly struck me in Provo, Utah as I shuffled toward my first screening on my first night at the fourth annual FilmQuest Festival.

When I arrived at the festival’s flagship theater, the Covey Center for the Arts, to catch that film—a documentary titled Love & Saucers about a 72-year-old artist who claims to have lost his virginity to an extraterrestrial woman—I told Assistant Director Jonna Jackson of the light I’d seen and joked that maybe it was coming from a UFO. “Maybe it was,” she replied.

A palpable weirdness hangs over FilmQuest’s harboring town, which hums quietly beneath the Wasatch Mountains, just south of Salt Lake City (where the festival’s first edition was held in 2014). Almost every genre festival in existence claims to outweird its rivals—be it with bizarre performance rituals, live interactive events, or taboo-pushing programming—but very few festival-runners can claim to be outsiders even on their home turf. That’s what makes FilmQuest such an endearing oddity and a beacon of hope. Though it’s situated in such an ultra-humble, conservative, and pervasively religious state, its profile hasn’t yet stopped rising, and with their rock-solid horror, sci-fi, and dark fantasy selections, Director Jonathan Martin and company are boldly daring uninitiated local viewers to dip their toes into the dark end of the pool. It’s telling that the trailer for Wes Craven’s Deadly Blessing, a film about an orthodox, Amish-like community with homicidal tendencies, was in regular rotation before every screening—in the spirit of holding a mirror to the uglier side of organized religion. Indeed, when I asked Jackson which films were the talk of the fest, her first mention was of the horror-comedy Vidar the Vampire—especially polarizing with Provo audiences, she explained, because of its religious satire and curse words, which don’t always go over well with a largely Mormon crowd.

Although their presence illustrates how subversive the festival can be despite its roots in such an old-world location, Provo locals were, of course, only a fraction of FilmQuest’s international patchwork of attendees. A motley crew of macabre moviemakers, FX artists, musicians, festival directors, and many more from across the globe gathered to showcase their features and shorts and swap stories during well-conceived and executed panels on women’s advancement in the industry, diversity in genre storytelling, creature performance acting, and having what it takes to run a high-caliber genre festival. In this respect, FilmQuest’s singular location lent itself exceedingly well to networking, as the time spent exclusively at the Covey Center among newly-made friends and colleagues in between screenings, panels, and events evoked a buzzy, college campus feel, with each meeting and subsequent conversation rendering the festival’s community tighter-knit from moment to moment.

Winner of the Minerva Award for Best Female Director for her film Jules D, Norma Vila. Photograph by Dan Amezuca

FilmQuest’s (literally) piercing Cthulhu-inspired award statuettes—nicknamed “the Stabby” due to their razor-sharp, brushed silver edges that have drawn the blood of those who hold them—were given to moviemakers competing in a wide range of categories that reflect the festival’s forward-thinking approach. The polarizing, claustrophobic revenge thriller The Glass Coffin took home prizes for Best Feature Film, Best Director, and Best Lead Actress, and the Minerva Award, honoring achievements of female filmmakers, was given to its producer, Norma Vila.

After a plate of hog jowl tacos with Kiggs Carlsson— whose dark folkloric short “Spiritus Lepus” grabbed two awards on closing night—he told me, “I’ve never been to America. Is Utah what all of it’s like?” That my answer was a resounding “No” is one of the many reasons why I recommend seeking out this eldritch Utahan event. FilmQuest is taking risks on films and filmmakers you’d least expect to thrive in an environment like this, and they’re paying off. MM

The fifth annual FilmQuest Festival was held September 8-16, 2017 in Provo, Utah. Next year’s festival will be held September 7-15. For more information, visit here. All photographs by Dan Amezuca.