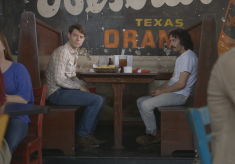 “Victoria is a small town in south Texas that isn’t known for the arts, but that’s not to say that is the truth of what the place is about,” said Anthony Pedone, Executive Director of the Victoria TX Independent Film Festival.

Since its inception in 2012, VTXIFF has been proving him right. The fest has grown in popularity and scope; last year’s program featured 70 local and international indie films. As part of Pedone’s Film ExChange, a network with partner festivals in Austin, Corpus Chrisi, New Orleans, Brooklyn, Las Vegas, and Berlin, VTXIFF offers the “Crossroads Award” of $5,000 to one lucky winner pooled from the various events

But what makes this festival truly unique is Pedone’s ambitious—some may say quixotic—goal: to turn VTXIFF into a setting for film production as well as exhibition. As Pedone explains, it has always been his goal to create “a festival where films are made during and after,” a two-birds-with-one-stone scheme to turn his hometown into the film hub he’s always envisioned. If this sounds to you like an urge to multitask that borders on insanity, you’re not the only one, but Pedone seems to be successfully pulling off this juggling act.

Pedone addresses a crowd at VTXIFF

Besides serving as executive director, Pedone is also VTXIFF’s feature program director, as well as an indie moviemaker in his own right. In 2011, Pedone produced the feature Roundball. The film was originally budgeted at $95,000, but ended up only costing $35,000 due to the enormous support he garnered from the local community. Restaurants provided food, people offered housing and locations, and car dealers even rented vehicles free of charge. “Basically, what we learned was that Victoria was ready to get behind indie film,” said Pedone.

The next year, with this good will and funding from the city behind him, he founded VTXIFF. While programming for the fest, Pedone came across Must Come Down, a feature directed by Kenny Riches. He immediately contacted Riches, hoping to program the film. After weeks without any response, Riches finally replied with bad news: On the day of Pedone’s original email, Must Come Down’s lead actor, David Fetzer, had passed away. The cast and crew were starting a foundation in Fetzer’s name and producing one of the shorts he had written to carry on his legacy.

David Fetzer’s brother, Scott Fetzer, and Patrick Fugit converse in a scene from “Isip the Warrior”

Having experienced a similar loss earlier in his life, Pedone was determined to help. He invited Riches and the entire cast to VTXIFF 2013, both to screen Must Come Down and, while they were at the festival, to shoot in Victoria. And so it came to be that Fetzer’s short, “Isip the Warrior,” was shot during the festival with Pedone and his staff supplying gear and housing for the entire production. They used festival audiences as extras and were able to negotiate impromptu cameos of attending talent, the likes of which included actor Rutger Hauer, guitarist Jane Wiedlin (the Go-Go’s), and SXSW co-founder, Louis Black.

This was the major advantage of shooting during a festival, said director Riches: “Other filmmakers and talent got involved pretty much on the spot.” Riches added that Pedone, who served as executive producer, “was getting our locations locked in as he was driving between venues to introduce films. It was insane!” Despite (or due to) the inherent chaos of the idea, shooting during a film festival was exhilarating, even more so because it was a labor of love for Fetzer’s memory. “The process of making a film unites a group of people in an intense way,” said Riches. “You can imagine how it was for us, given the circumstances. It was an extremely unique, generous, and wonderful experience that I’m forever grateful to have had—the kind of support you want, but can’t always expect from festivals.”

Rutger Hauer in a scene from “Isip the Warrior”

After living to tell the tale, Pedone is raring to do it again, and it seems he isn’t alone in his efforts “to make Victoria a destination spot to shoot an indie film.” The Victoria city council recently approved a $25,000 indie filmmaker production fund that will be used to finance Pedone’s upcoming feature, An American in Texas. We can’t help but applaud Pedone’s resourcefulness and the generosity of the Victoria community—and wonder what their combined efforts will produce at next year’s fest. MM

For more information about the David Fetzer Foundation visit www.thedaveyfoundation.org

Festival Spotlight Friday: Onwards and Upwards with Cinequest 2014
50 Film Festivals Worth the Entry Fee in 2014: A through C