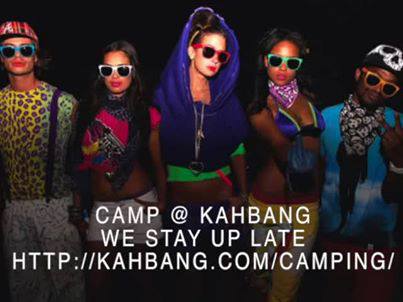 As its name suggests, the recently re-launched KahBang Film Festival is boldly shaking up the traditional festival format. Kicking off yesterday with a block party, this unique festival invites you to stay at its campsite, high-five a filmmaker at its Q&A’s, and pay homage to analog at its VHS Night event.

Located in the beautiful Bangor, Maine, the KahBang Film Festival (official website here) screens both in the city’s funky downtown area and on the Bangor waterfront (where the festival features its own “Kahboat” cruises!). This year, the fest has an especially diverse program, including Slamdance favorite The Dirties and horror-thriller Black Rock, helmed by Maine’s own Katie Aselton.

Moviemaker Magazine (MM): KahBang Film Festival was recently re-launched by the nonprofit organization KahBang Arts, but can you give us a little bit of the history behind the festival?

Meg Shorette (MS): The film element of the KahBang brand launched in 2010, just one year after the first KahBang Music & Art Festival. Over the years, every aspect of KahBang has expanded: the creative elements, the size and scope of music discovery and even the duration (from one day in 2009 to four full days now in 2013). Like most things in our team, KahBang Arts started in 2011 as a brainstorm session over drinks at someone’s place.  We had identified an area that could be so much more than just a small piece of the festival. I set out to create KahBang Arts, the year-round nonprofit presence of the KahBang brand. After two years of curating the Art Festival as part of the mission, we moved the Film Festival under our umbrella as well. It’s been an incredible addition!

MM: KahBang Film runs in conjunction with the music and art portions of the greater KahBang Music|Art|Film Festival, which is a trend we’re starting to see at many locations – film festivals are adding musical programming and vice versa. What kind of animal is an event like this, then? How do the varied components interact and inform each other?

MS: When you have three very strong and independent elements of a larger event, it gives you the opportunity to cross over and mix talents from all creative fields to make one really incredible experience for fans. For example, you can pretty much bet that when we do a music documentary panel, there are musicians sitting in as well. And an artist from the 2011 KahBang Art Festival designed our 2013 Film Festival poster.

MM: What role do you personally play in the festival? How did you come to be part of it, and what is most fulfilling and most challenging about the position?

MS: That’s a great question (laughs). We are a very small team, and all volunteer (by day, I am the Director of Marketing of the Maine Discovery Museum). I am fortunate to work with friends who are immensely talented in so many areas. Primarily, my title is the Executive Director of KahBang Arts and as of early 2013, the Director of KahBang Film Festival. I am also heavily involved in the music booking for the music festival side, primarily scouting discovery acts.

The most challenging part of this role is, funny enough, also the most rewarding. While I didn’t grow up in Bangor like most of the team, I did grow up in Maine. Dreams of moving away after college faded when I realized that we could actually do all of the things we wanted to, right here in Bangor, Maine (not that we haven’t had struggles). Now, only five years later, Bangor has evolved into this amazing cultural hub and I couldn’t be more proud to be a part of it.

MM: How does being located in Bangor, Maine influence the festival’s unique character: its atmosphere, its programming?

MS: Bangor is absolutely beautiful! The historic buildings and squares, rich character, and funky downtown and arts scene have become so much of who we are. We get to boast of our very own river on festival grounds, and, of course, we feature “KahBoat” cruises all weekend with music, food, and brew. While our festival is primarily on the Bangor Waterfront, we also present showcases in downtown venues and offer a Late Late Stage at our festival campsite, just a few miles from grounds. All in all, Bangor is like a city in the woods—in the best ways.

MM: Tell us about the VHS Night “homage to Analog” screening at this year’s KahBang. Can you give us a sneak peek about what that will consist of, and explain why VHS was chosen for this year’s festival?

MS: When I started redesigning the film festival brand and logo, I looked at what many other festivals were doing, and many featured 35 mm film rolls, old school projectors, and things of that nature.  I thought it would be funny if instead of going way back to the start of film, we would just go a little ways back, and stop at VHS—hence the leap to a special VHS Night at this year’s festival. In all seriousness, I have more VHS tapes in my home than I’m comfortable admitting publicly and I’m just not ready to let go!

We will be programming a short “Ode to Chris Farley,” as he would have turned 50 this year as we turn five (our film venue has been dubbed “The Tent down by the river” by the team). Our VHS selection is Billy Madison and, yes, we will be screening through VCR/rear projection. I can’t wait.

MM: The fascinating bullying treatise, The Dirties, is this year’s closing night film. What else are you looking forward to seeing in particular at KahBang?

MS: Taking on the film element this year has made 2013 my most loved KahBang Festival to date, hands down. In about four hours, we have 22 filmmakers rolling into Bangor, and that is probably what I’m most excited for. Highlights for me personally this year are horror-thriller Black Rock (featuring Katie Aselton, a Maine actress with Bangor ties), and pretty much every single short film and experimental film we selected. With more interest than ever by filmmakers, our programming has not only expanded but it’s become a testament to where KahBang Film is headed.