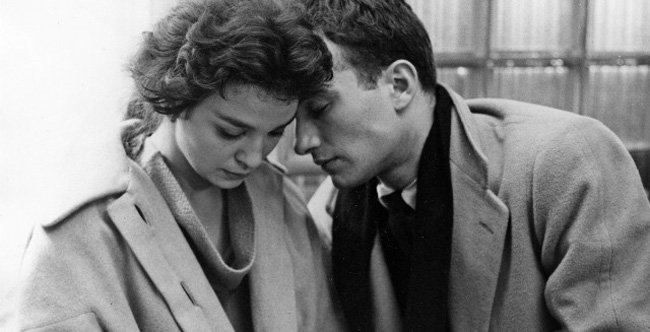 My favorite metaphor for thinking about artists is as students and teachers. (Since I’m a teacher, I admit that my occupation probably biases me.) Like students and teachers, above everything else, real artists must be humble and willing to learn. They must open themselves up and make themselves vulnerable. That’s not a very fashionable stance. We live in a culture that’s devoted to being “cool,” in control, and above-it-all. The goal is to be wised-up and “in” and smart. That’s another source of Tarantino’s cachet. His movies are so hip and knowing. Well, I have news for him. Real art is about not knowing. It’s about being humble. It’s about admitting how little we understand about who we are and what we need or want. The greatest films are made by artists who dare to plunge into their uncertainties, their places of fear and doubt.

Again, Cassavetes can stand as a model of this kind of artist. He went into his films genuinely willing to learn from the process of making them. He used them to explore parts of his life he didn’t understand. He had a sense of wonder at all they taught him about life. Let me tell you a little story about one of his greatest works that will make clear what that means. This is the first time I’ve ever told it. I’m not sure how many of you know about the early part of his career, so I’ll briefly summarize it. John made his first film, Shadows, as a no-budget indie production, more or less entirely on his own in New York. The film didn’t do that well commercially, but John managed to get some attention by giving interviews. When all was said and done, he was offered a studio contract to make two low-budget features on the West Coast. He was young and naive, and jumped at the chance, and moved to Los Angeles actually believing he could do the same thing he had done as an independent, only this time with a decent budget, a professional crew, and a whole studio support system. He thought it was a dream come true.

Well, I probably don’t have to tell you what happened. The predictable result was two mediocre movies and a total, unmitigated, career disaster. The studios had talked a good line, but when final cut time came around, they wanted their kind of picture, not his, and on both films John got into incredible fights with his producer, and eventually got thrown off the set of the second film and blackballed from working in the studios. He went back to his big, new house in the Hollywood Hills and sat at home licking his wounds, unemployed and unemployable. He could hardly believe the way he had been treated and what had happened to him. He was young and idealistic and inexperienced, and had never had a run-in with the kind of men he had had to work with on these two pictures—high-powered studio producers and executives whose only interest were power, money, and the bottom line. Art was a dirty word to these guys. John was treated pretty badly, but he was so different from these men that even when it was over he still couldn’t really understand why they’d done to him what they had.

So what did he do? He decided to make a movie about them. The result was Faces—the film I walked out on. John made the movie to try to figure out what made these guys tick—how they could be so entertaining, and so much fun to be with, in some ways, and so awful in others. He wanted to understand what they were like when they were home with their wives eating supper. He wanted to understand what their sex lives were like. He told me he was puzzled all the way through the movie: He wrote the script to try to come to grips with them; he shot scenes in dozens of different ways to try to figure out how they might have acted in different situations; he played and replayed the footage on an editing table to try to figure out what it was like to be them.

But Cassavetes also told me that a strange thing happened as he made the movie. As he wrote, directed, and edited it, his bitterness and rage dissipated, and he began to feel a deep compassion for these men. He started to realize things that he hadn’t before. He let his film teach him, and he gradually changed his mind about his enemies. He still saw how awful they were, but where he had begun by despising them, he began to feel sorry for them. He saw how they tortured themselves even more than they tortured other people. He saw how unhappy they were, how emotionally needy they were, how insecure, how desperate for love and approval. In short, John eventually came not only to understand the men who had ruined his life, but almost to love them. He came to see them with kindness and sensitivity.

That’s what it means to use film—not to tell a canned story in the Hollywood way, not to make a set of points you’ve already arrived at—but as a means of understanding life. That’s what it means to humble yourself before your material, and genuinely let yourself learn from it. Is it clear how different this is from the way films are usually made, not only by mainstream directors, but even by many independents. It’s obvious to me that Robert Altman, for example, whatever his other considerable gifts, was incapable of this sort of openness to his material. He had clearly figured almost everything out before he stepped onto the set. His goal was to score points—not to look, think, and actually learn or change his mind in the process of making the movie.

To open yourself as completely as Cassavetes did in front of a set of experiences you don’t understand, and use film to work through them, is to grapple with deep mysteries of human personality. By mysteries I mean something entirely different from the acts of mystification in Hitchcock, DePalma, Lynch, the Coens, or their clones. There’s a lot of mystification in contemporary film—the deliberate withholding of information to thrill or titillate an audience, but no real mystery. The mysteries in thrillers can always be cleared up by the final scene, which is to say that they aren’t mysteries at all in the sense I mean. Cassavetes explores mysteries of who and what we are that won’t be resolved. His mysteries have the profundity of life.

I do a lot of interviews, and I frequently get asked the question of where independent film is heading? What trends are there? I always answer the same way by saying that it is an illegitimate question. It treats art as if it were like advertising or politics or Wall Street, as if it were a matter of demographics or trends or business cycles. The truth is the opposite. True artistic creation is solitary in its essence. It is not done by a group, but by an individual. It is one heart speaking to one heart. And it doesn’t ultimately depend on funding or support groups or government grants. (Though those things certainly don’t hurt!)

There’s a lot of talk about how technology will make things better for filmmakers of the future, but I don’t think the future of independent film depends on technology, either. Real artists can use anything. If 35mm film is not available, they’ll use a RED. If a RED isn’t available, they’ll use a Canon 5D. In Another Girl, Another Planet, Michael Almereyda made a feature film with a $69 child’s pixel-cam. It’s terrific. Todd Haynes used Barbie dolls when he couldn’t afford actors. Superstar is pretty amazing, too. A real artist can use finger paints—like my friend Stan Brakhage—or finger puppets—like Paul Zaloom. The best student film I ever saw in my life was a series of still slides projected on a screen with a desynchronized voice-over narration. One of the best artists I know uses his hands to make shadows puppets on a sheet hung on a rope. Talk about low-budget production! It doesn’t matter. Where there are men and women devoted to telling the truth about life, great art will continue to get made.

Ray Carney is Professor of Film and American Studies at Boston University and the author of more than fifteen books on film and other art, including the critically acclaimed Cassavetes on Cassavetes and The Films of Mike Leigh. He runs a web site devoted to independent film and other art at http://www.Cassavetes.com.

Love and the Bomb: Sally Potter Returns to 1960s London with Ginger & Rosa
Nairobi Half Life: Endorsed by the Kenyan Embassy