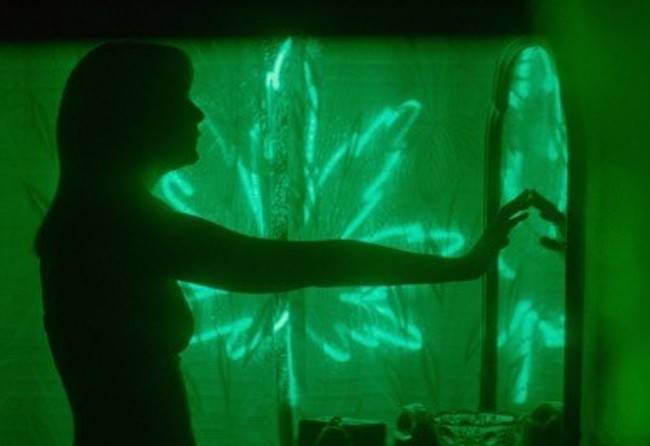 I was not familiar with Kate and Laura Mulleavy’s impressive career in fashion, but from the first minutes of our meeting it was clear to me that I was in the presence of true artists. I knew that working with them would be an inspiring creative journey.

When I got to Kate and Laura’s office, it was filled with about 500 prints of art, photographs, and screen grabs from their favorite films assembled on the walls and floors of their studio. I enjoyed the sisters’ passion for visual storytelling and our sharing of poetic expression.

During the prep weeks, we would study all these visual clues and watch movies ranging from The Texas Chain Saw Massacre to a documentary on the paintings of Gerhard Richter.

The sisters’ goal was to do this film from a different, more feminine perspective than the mainstream cinema of the last 100 years. The film was also a kind of meditation on grief.

Kirsten Dunst in a scene from Woodshock. Image courtesy of The Orchard

Woodshock tells a story of a sensitive nature-lover, Theresa, (Kirsten Dunst) who is delusional, experiencing grief and paranoia in a small, wood-industry town of Northern California. Nature is an important character in this movie, and I understood early on that it would be challenging to show the magnitude of the Redwood forests, where the directors spent their childhood and where this story takes place. Anamorphic format was best suited to capture the essence and magnitude of the environment surrounding Theresa—a tiny being overwhelmed by the beauty of nature.

We created a pulsing light idea for night shoots in the woods with my gaffer Jim Plannette in order to add to the three-dimensional quality of the woods, and also for it to have a visual “heartbeat.” We used moving shadows and would subtly dim two slightly differently placed colored lights up and down to achieve this effect. I also played a lot with focus on the lens to melt the main character into nature and back. This was the idea behind double-exposing her on film with images of nature as well.

We wanted to shoot everything on film because of its superb capability of capturing nuances and nature. However, we didn’t have too many shooting days, and the locations were far away from the endangered film labs. That is why we made a compromise with our supportive producers Ben LeClair and Michael Costigan. We would shoot most of the dialogue scenes digitally, but for Theresa’s memories, flashbacks, and some nature shots, we would use film with double exposure possibilities.

A scene from Woodshock

Another very clear idea that we shared was that we would make all visual effects in camera. I believe it’s much better for directors to see what they are getting on set, as it always feels more real. We used camera filtration, lighting, and a “reverse teleprompter” we created during tests to be able to digitally “double-expose” the sensor, using a 4K playback monitor and sending effects via transparent mirror at 45 degrees to the lens. This way we could control our effects in real time. I visited Clairmont Camera and many other inspiring shops in L.A., which had been developing analogue camera effect filters and other fascinating systems since the ’70s. We also used mirrors and dimmable neon signs for moments revealing Theresa’s disorientation with reality.

A scene from Woodshock

Our wonderful production designer K.K. Barrett was very involved in developing these methods.

Of course, some of the moments, like a levitating house, were finally pushed to VFX, but generally I was surprised about how easy it was to create moments like Kirsten levitating high in a Redwood forest for real and not in a green screen studio as VFX houses initially suggested.

After the tests, I decided to use Vantage/Hawk vintage 74 series 45-90 and 80-180 Zooms (to give more options in framing quickly for the 1st time directors) spiced with a selection of wide Hawk close focus primes and Clairmont Swing & Shift’s which are also great for macro work.

I felt early on that Woodshock is a very sensitive journey into Kate and Laura’s own experiences. That is why I wanted to operate the camera myself and keep the set as safe and empty as possible from equipment and crew. MM

How They Did It: This Cinematographer Shot and Survived Explosive Wildfires For The Netflix Doc Series Fire Chasers
The Best Cameras for Every Budget: Ace One of the Biggest Decisions in Making your Feature