Undine: Shooting the Underwater Sequences of the Modern Fairy Tale 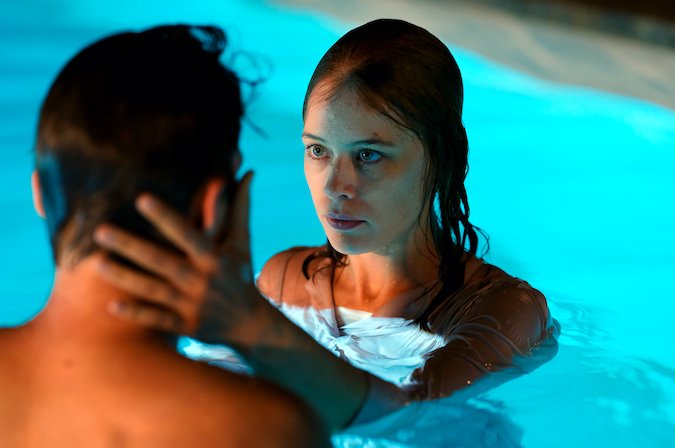 Undine, the latest film from Christian Petzold, is set in the present — but tells a story that feels firmly rooted in the past. An adaptation of an early-19th Century German fairy tale, Undine traces a romance between a water nymph named Undine (Paula Beer), and an underwater welder, Christoph (Franz Rogowski).

In this piece, Undine cinematographer Hans Fromm explains how the film used different color palettes to differentiate between the aboveground modern world and Undine’s underwater world, using green-hued lighting, and how the underwater world is first alluded to in an early moment in the story, with a spectacular aquarium burst. —MM 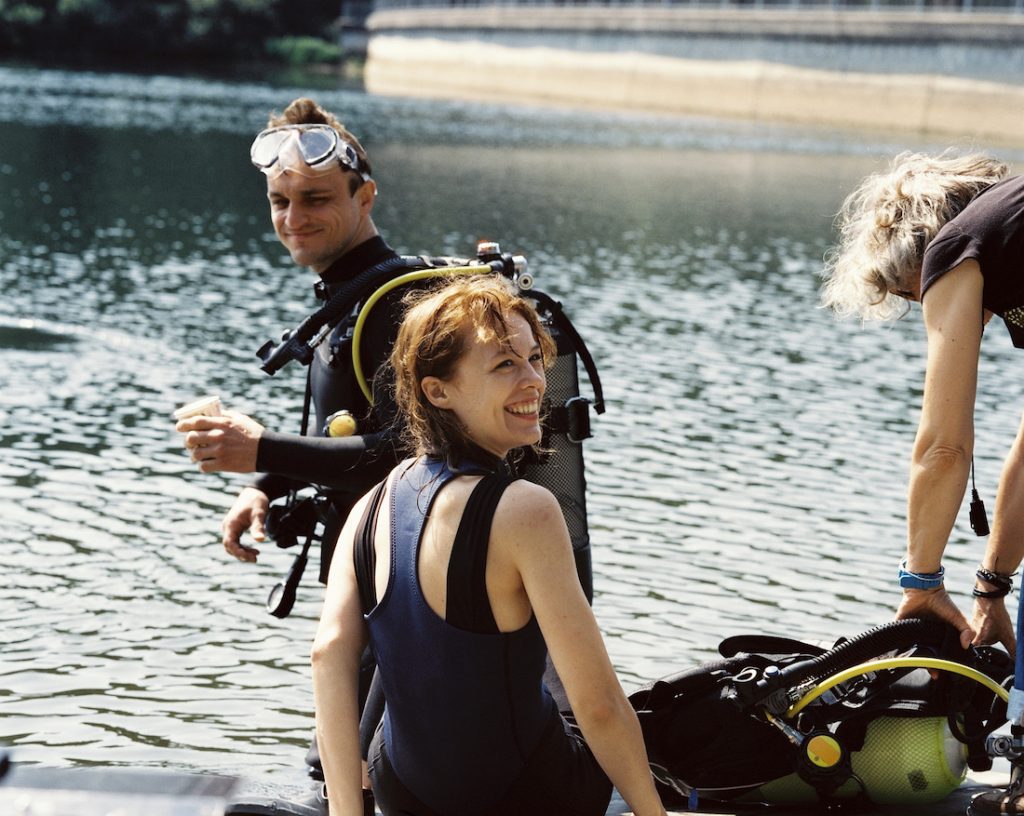 Franz Rogowski and Paula Beer prepare for a dive in Undine, lensed by Hans Fromm. Photos courtesy of IFC Films

As Christian Petzold and I have now worked together for more than a quarter of a century and I have shot all of his feature films, I have a good feeling for what he wants for a scene, and there is not too much discussion anymore before we start to shoot. Mostly, we visit the locations and try to find the essence for any particular scene by writing down a shot list Christian develops. On shooting day, we adapt it to what the actors and the location will give us. Sometimes it differs a lot from the original shot list — and usually it gains a lot.

The major quality of the cinematography for Christian’s films is never to show off. In order to achieve clearer storytelling, we use limitations like only using movements that are driven by the actors — no fancy angles and no short lenses.

Usually, I try to find a headline for the visuals of the film, like “expressionistic” for Phoenix or “paranoia” for The State I Am In. For Undine, I wanted fairy tale, supernatural and ghostlike references.

The idea was to create two different worlds that collide very early in the film: the everyday lives of characters and the “water world” of Undine. The worlds meet in the scene in the museum café, when the aquarium crashes onto Christoph and Undine. This is particularly evident with the shot that looks out of the aquarium into the café onto Undine, our first allusion to Undine’s underwater world.

The explosion of the aquarium was some challenge, and we had some tests beforehand to see where to put the cameras and how fast we needed to shoot it. We chose 48 frames per second with the option to reverse to real time (24fps) to keep the power and dynamic of the water.

For the quasi-POV shots of Christoph and Undine, we placed the camera into a waterproof crash box that our equipment-rental company, FGV, had built for us years before.

For the reaction shot of the actors being flooded on the floor, we had a water ramp built. The whole room was set up with pond liner, wherever the camera did not look, to prevent water damage. The scene itself was graded quite neutral and warm.

When we considered the color palette for the movie, we determined it was stronger to reserve the green tones for Undine’s world and keep the rest of the world neutral—or even warm as a contrast. This is especially evident in the restaurant terrace scene between Johannes (Jacob Matschenz) and Undine, where the feel and color reflect something different than the emotions in the scene. 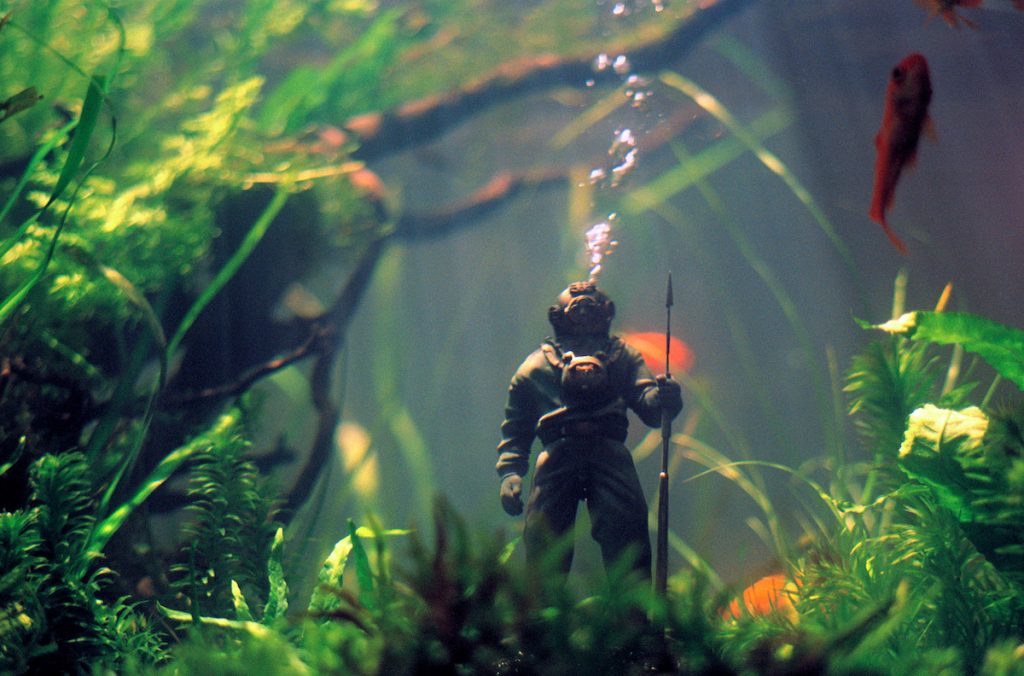 An aquarium in an Undine sequence is an early nod to the underwater world.

We shot most of these underwater sequences in a 30’x36’x36’ pool in Studio Babelsberg. Although there was an obvious need for VFX in post-production, we chose black walls and no green or blue for the background, as we wanted the underwater world to be pretty dark to accent the feeling of loneliness.

I lit the pool from above with large chimeras with green gels on the 6K HMI for some rim on the actors. Underwater, we had large approximately 3.3’x3.3’ Seapad LED panels for the fill. For the underwater welding sequences, I built my own tiny 2”x 2” waterproof LED panels on a DMX controller to enhance the light of the welding, or to replace the welding, as it clouds the water a lot. This was quite an issue from the beginning. We decided to shoot in clear water and to have the particles and the clouding done in post-production to maintain control.

I also had a fancy light built for the inside of the diving helmet that was controlled by the light falling through the visor. Because the diving suit was watertight, we had no ability to run wires to control the lights, and wireless does not work underwater.

Then I had a chance to light Christoph’s face in the helmet with a little reflector that collected the light from my fills without reflections from the helmet’s visor, and so I did not have to use the helmet light. I have seen the effect of lights in helmets too often in other movies and I felt it was not right for this movie. Although the light in the helmet would have enhanced the contrast to the darkness surrounding the actor, I am glad that I did not have to use such an obvious effect. Undine was meant to be fiction, but not science fiction.

When Undine and Christoph dive together, the main light was from the rim from above that my chimeras gave me, and the underwater LED torches the actors held. I had two extra torches for enhancements on a dimmer. 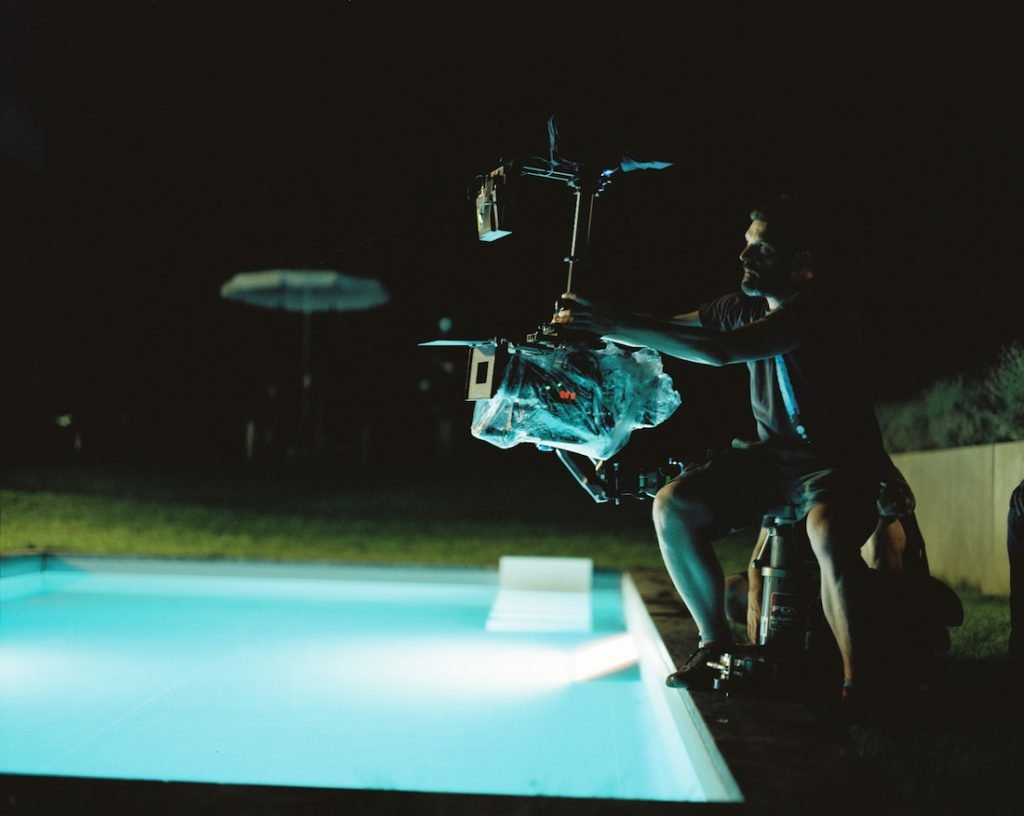 The water sequences in Undine were shot on location on at Studio Babelsberg.

One interesting scene is at the end, when Christoph walks from the shore into the water, then goes underwater. First he appears again, and then Undine is there. We did Franz’s shot in the lake and we shot Undine in the tank. With SFX particles and some grading, I feel it matches quite nicely.

The whole scene outside was quite a challenge as I had to shoot it “day for night.” The first lesson in film school for shooting day for night was no sky, no water, and no artificial light. But I always feel that night in film is always sort of an abstraction, anyway. Sure, one can try to be more realistic, but the night abstractions in film are so established to the audience that most of the time it is more beautiful to have the abstraction.

Undine, directed by Christian Petzold with cinematography from Hans Fromm, opens in theaters and on VOD on Friday.

How Screenwriter Databases Like Coverfly and The Black List Can Find the Next Bridgerton
Cannes Competitors; Tarantino’s Theater Reopens; Indiana Jones Giveaway