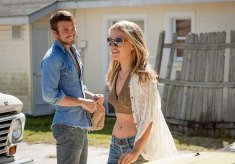 Shana Betz’s debut feature Free Ride, starring Anna Paquin, Drea de Matteo and Cam Gigandet, and produced by Paquin and husband Stephen Moyer amongst others, opens in select theaters January 10, 2014, and we’ve got an exclusive scene to whet your appetite.

Paquin stars as Christina, a young mother of two daughters (the older, MJ, played by Liana Liberato and the younger, Shell, played by Ava Acres), whose knack for volatile romantic relationships finally drives her and her family to Florida. Christina meets up with old friend Sandy (Drea de Matteo) looking for employment, and quickly moves up the ranks within the marijuana racket that Sandy is a part of, headed by the mysterious ‘Bossman.’ The autobiographical film, which Betz wrote almost directly based on her own eventful childhood in 1970s (the youngest daughter Shell is a surrogate for young Shana), is an unusually non-judgmental portrait of a mother who makes some bad decisions all for the love of her children.

In this clip, Christina has just gotten her foot in the door at the Bossman’s shady operation. Being promoted from cleaning houses to handling actual deals, she is given a Drug Smuggling 101 crash course by Sandy on the docks. As Paquin plays her, Christina’s sweet, unassuming charm will soon prove both useful and dangerous for her career.