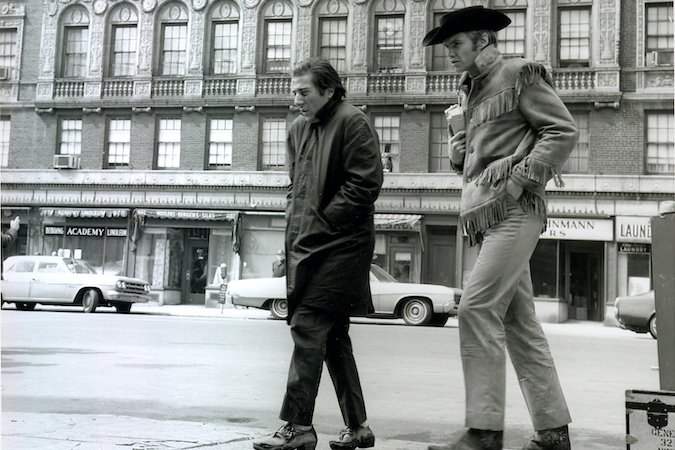 John Schlesinger’s 1969 film Midnight Cowboy was groundbreaking in its frank but sympathetic depiction of a male prostitute, Joe Buck (Jon Voight), and a sickly con man, Ratso Rizzo (Dustin Hoffman).
The film portrayed hustling and homosexuality without judgment, initially receiving an X rating that was later lifted, and earned Academy Awards for Best Picture, Best Director and Best Adapted Screenplay. It also ushered in a decade of stories that were gritty, unvarnished, and beautifully told. Rizzo delivers the film’s iconic line, “I’m walkin’ here,” when a cab driver fails to give him his proper respect. Glenn Frankel’s Shooting Midnight Cowboy: Art, Sex, Loneliness, Liberation, and the Making of a Dark Classic comes out Tuesday, and as this excerpt shows, the actors’ walks were integral to their performances.
When John Schlesinger walked into the ballroom of the aging Astor Hotel, on Times Square, on a Monday morning in April 1968, to begin two weeks of rehearsals for Midnight Cowboy, he didn’t know what to expect. Waiting for him were Dustin Hoffman and Jon Voight, the two actors he had chosen, with some reluctance, to play the leads.
Hoffman was thirty, Voight twenty-nine. Despite Hoffman’s sudden fame after starring in The Graduate, neither had much movie experience. They were not exactly rivals but not really friends. Each had spent nearly a decade struggling to create a viable career in one of the most difficult and unpredictable of professions in a city that was merciless when it came to crushing the hopes of young actors. Each was supremely confident of his own gifts, but self-doubt was baked into the process of developing their characters. And each was aware that he needed the other. They were playing two vastly different men who start off as antagonists but slowly develop a partnership based on raw mutual need. Each comes to accept his dependence on the other, but the wariness between them never disappears. This was not the usual buddy movie. It was two men in an urban jungle, forced to guard each other’s back while never truly trusting each other. And the relationship between the actors mirrored in many ways the volatile partnership between the characters they played.
“There was a lot of electricity in the air between us because we were young actors, vying actors,” Hoffman would recall. “It’s not that you don’t want the other one to be good, you just don’t want to look bad. On the other hand, we were kind of rooting for each other because we’re all kind of the underdog.” 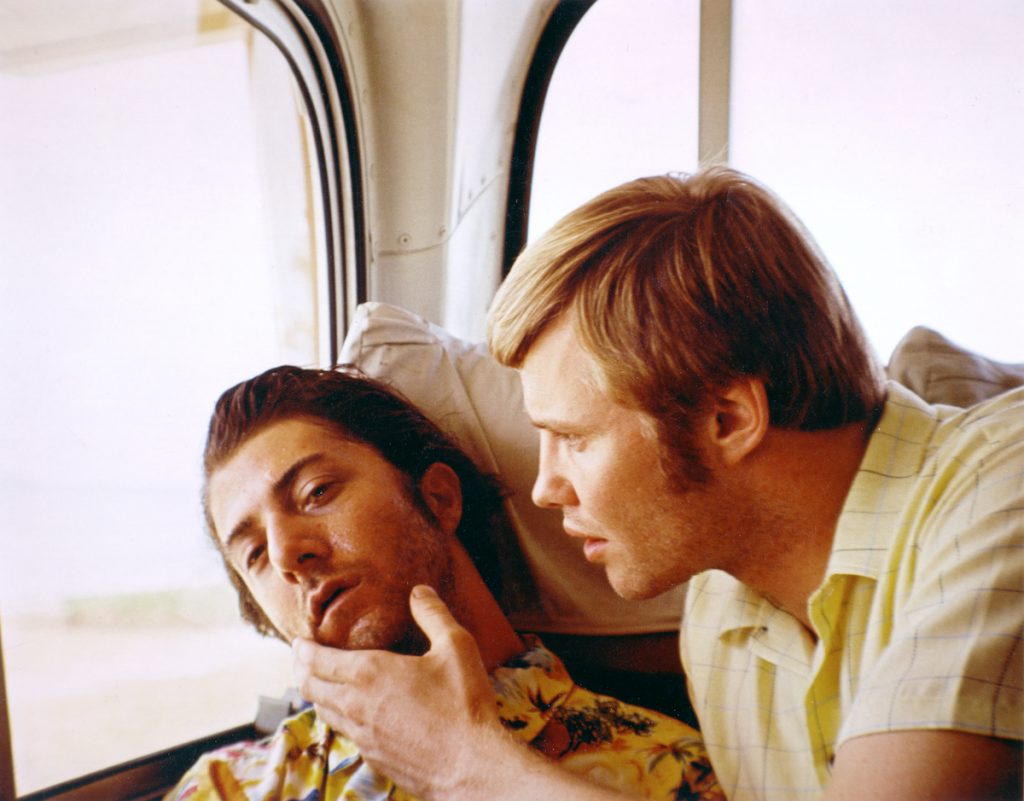 Both men had developed a solid understanding of their characters. Voight saw the loneliness and neediness in Joe Buck, but also the humor. Hoffman understood the thwarted dignity and survivor’s instinct at the heart of Ratso Rizzo. Using the description of Ratso’s walk carefully laid out in Jim Herlihy’s novel, Hoffman had developed a rolling gait, put stones in his shoes, and with Ann Roth’s help built for himself a greasy pompadour. “It’s in the book — there’s nothing in that character that’s created by me,” insists Hoffman. “I tried to re-create what was really brilliantly written by James Leo Herlihy.”
He also had acquired a set of false teeth to snap over his real ones. Dentist Arthur Poster made an acrylic shell, then painted on stains, old fillings, cracks, and shadows with what he called a “self-cure staining stick.” The results, Poster reported proudly, “looked really horrible. I was pleased.”
Also read: Martin Scorsese: Things I’ve Learned as a Moviemaker
Somehow, with help from the master makeup man Dick Smith, Hoffman managed to look both seedy and yet intriguing. Voight noticed, and immediately felt anxious. “I was so jealous of Dusty’s ugly teeth and that perfect limp,” he recalled. “I knew I had to find the right walk for me, too.”
Even before the rehearsals began, Schlesinger and Holender decided to take advantage of the frosty gray weather and leafless trees to capture with a telescopic lens the two characters walking across the Willis Avenue Bridge, which connects the Bronx and upper Manhattan. They tried to add some dialogue, but neither actor was prepared for it — Hoffman hadn’t yet decided on what kind of voice he would use for Ratso. “I said, ‘John, I don’t even know what I sound like yet,’ and he said, ‘It doesn’t matter, we won’t even hear you, but there’ll be [steam] coming out of your mouths from the cold.’”
As he limped along behind Voight’s loping strides, Hoffman’s voice fell into a high-pitched, nasal-toned Bronx shuffle that became Ratso’s voice for the entire movie. “Sometimes, when you’re that scared, it’s like the curtain is opening and something comes out,” he recalls.
“It was never done with any kind of technique, it was just a hit or miss.”
Then Hoffman broke into a coughing fit so frantic that he threw up all over Voight’s new cowboy boots. An alarmed Voight took Schlesinger aside and asked, “Is he gonna do that throughout the movie?” 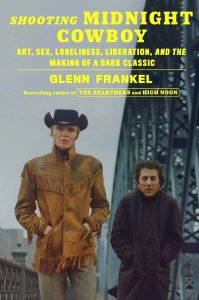 The rehearsal sessions quickly evolved from a mere table reading of the script into a festival of improvisation between the two men, with the encouragement of Schlesinger and Waldo Salt. John had never worked with such volatile and creative performers before. He focused on the scenes between them, looking to make those moments deeper and more meaningful than what was in the script, and to capture both the fissures and the slow bonding between the characters. Salt was crucial to the process. Unlike many playwrights and screenwriters, he didn’t insist that the actors stick religiously to the lines he had written for them. The screenplay, for him, was a work in progress. He was more than willing to let Hoffman and Voight develop their characters in front of him, and he helped goad them into expressing their conflicts. Waldo “wasn’t a prima donna about his lines,” John recalled. “And he’d very often agree that the scene hadn’t gone far enough.”
Schlesinger was fascinated about what the two characters might do and discuss inside the small, cold-water flat where many of their interactions took place. “I wanted to know more about what it was like for those two unlikely people to share that tiny apartment,” he said. Hoffman and Voight quickly got into it, riffing on intimate matters like how they kept clean, who flushed the toilet, what they each did about body odor and masturbation. They talked about religion, reincarnation, space aliens, manhood, and their own sexuality. Waldo would trail after them around the ballroom, with a microphone attached by a long cord to a heavy Wollensak reel-to-reel tape recorder. After the sessions, he and Schlesinger would replay the tapes, and John would single out pieces for Waldo to type up and insert into the script. “We transcribed what we recorded, and there were some gems in it,” John recalled.
Also read: White Tiger DP Paolo Carnera: To Shoot a Film, First Take a Picture
“John just had that glint in his eye,” said Hoffman. “He wanted to be surprised constantly. He craved collaboration. He didn’t ever act like a bandleader. He acted like a jazz musician in a combo.”
After more than thirty years in the motion picture business, Waldo Salt thought he’d seen it all. But he’d never seen anything quite like Hoffman and Voight as they got down to the business of creating and meshing their characters. “These guys were just beyond description,” he would recall. Even at lunch or on breaks, neither would stop — “they just became Joe Buck and Ratso Rizzo. It’s nice to feel that at least one time in your career that in a picture everything worked, and in this picture it did for me.”
Excerpted from Shooting Midnight Cowboy: Art, Sex, Loneliness, Liberation, and the Making of a Dark Classic by Glenn Frankel. To be published by Farrar, Straus and Giroux on March 16, 2021. Copyright © 2021 by Glenn Frankel. All rights reserved.
Main image, above: Dustin Hoffman and Jon Voight.
Continue Reading
Advertisement
Related Topics:Dustin Hoffman, exclusive midnight cowboy, feature, John Schlesinger, Jon Voight, Midnight Cowboy