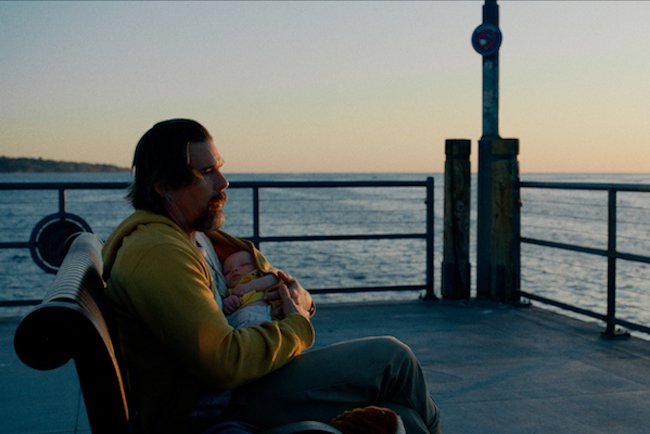 Huddled together in a dingy motel room in a scene from Logan Marshall-Green’s Adopt a Highway, a former prisoner, played by Ethan Hawke, reads Harry Potter and the Order of the Phoenix to the child in his arms.

“The world is not split between good people and death eaters. We’ve all got both light and dark inside of us,” the man reads. “What matters is the part we choose to act on. That’s who we really are.”

The words belong to Sirius Black. But the sentiment will guide the characters in Adopt a Highway from this point in the film on.

In Logan Marshall-Green’s feature film directorial debut, Adopt a Highway, Hawke plays Russell Millings, an ex-convict who is released from prison at the beginning of the film after serving a 20-year sentence for a third-strike possession of marijuana. Adopt a Highway points out that life is not black and white, that people are deserving of second chances, and that, above all, that we need other people to help us get better.

Hawke’s first instance of dialogue that is above a mumble or whisper comes almost ten minutes into the film, and what he says is that he doesn’t have an email. In discovering a world that has moved on without him, Russell’s simultaneous loneliness and bewilderment at the way things are overshadow his warranted anger toward the way his life has gone. Often afraid to speak up for himself, Russell shuffles through the world with a man-child energy, one that the audience can feel nothing but sympathy for.

Russell spends most of his days either alone in his motel room or at his job at a burgers place. He is unable to see his boss as anything other than an authority figure, on par with a prison guard, but remains dedicated to his job. One of his nightly trash runs changes his life forever: He finds an abandoned baby who is accompanied only by a piece of paper that reads “Her name was Ella.”

Terrified and unsure of what to do, Russell brings Ella to his motel. Though Russell barely knows how to take care of himself, much less a young child, the two become exactly what the other needs, despite all of the hardships that lie ahead of them.

Both Russ and Ella have had their futures scorched, but together they find happiness. Though their lives do not possess heart-palpitating drama, their struggle to get by together illustrates the importance of human connection and love. While Russ saves Ella’s life, Ella’s very presence pushes Russ to rediscover the person he once was as he grows to once again find meaning and purpose in his life.

While Marshall-Green does include voiceovers of President Clinton, and other references to the broken criminal justice system, the film centers itself not in anger, but in a somber hopefulness for the future of Russ and those like him. Perhaps it is the presence of a child that brings this feeling, or Russ’s own outlook on life, but what remains for certain is the light that shines through Russ’s empathy and his desire to do right by others, especially Ella.

Adopt a Highway reminds us that elation and despair can interchange quickly, and that it is through connection with others that we hold onto the true joys of life. Russ’ happiness sincerity while with Ella are on the same level as the sincerity of the Marshall-Green’s direction and Hawke’s performance, making Adopt a Highway a film that lights a path toward the importance of loving others and the act of taking care of each other.