Ethan Hawke in the MCU; Zach Braff’s Directing Advice From Alexander Payne; Inside CODA and Beckett 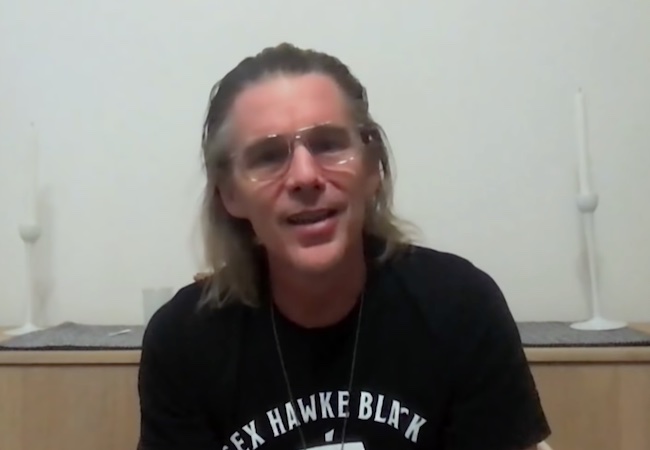 How a fateful Brooklyn coffee shop meeting pulled Ethan Hawke into the Marvel Cinematic Universe; we talk with the star of CODA and director of Beckett, Alexander Payne gave Zach Braff advice on hair styling that was actually advice on directing; and the trailer for the dark, bold Sundance drama Wild Indian.

Out Now: Between the Aretha Franklin biopic Aretha (in theaters) and CODA (in theaters and on Apple TV+), it’s a great day for musical dramas. The well-reviewed Ryan Reynolds video-game movie Free Guy is also in theaters. And Beckett, with John David Washington as an American tourist fighting for answers and survival in Greece, is out on Netflix.

Tell Me More About This… Beckett: Here’s our interview with Beckett director Ferdinando Cito Filomarino, which you can also listen to on Apple, Spotify, Google or here:

And CODA? I Should Like to Know More About This CODA, As Well: Here’s Margeaux Sippell’s interview with Emilia Jones, who stars in the film as a child of deaf adults, or CODA, who wants to become a singer.

Also: Visit our homepage later today for my interview with the director, Siân Heder, about her research into and inclusion of the Deaf community, telling a musical story as a non-musician, and winning over the skeptical people of Gloucester, Massachusetts.

Finally: Margeaux Sippell also spoke with Respect director Liesl Tommy, and that interview will also be up later today.

Tousle Its Hair: If you’re like me, Fridays mean watching Ted Lasso with your beautiful wife and weeping tears of love and joy into your peanut-butter chip iced creams. Zach Braff, one of the directors behind this utterly charming show, talks below with Micah Khan about some directing advice he received from Sideways and Nebraska director Alexander Payne — and explains how Ted Lasso star Jason Sudeikis helped pull him back from going too big.

Moon Knight: Indie king Ethan Hawke explained to Seth Meyers on Late Night how he’s ended up playing a character in the MCU’s Moon Knight, starring Oscar Isaacs as the mysterious hero: “I heard about it from Oscar Isaac, who lives like three blocks down the street from me in Brooklyn, and I was at a coffee shop, and he came up to me said, ‘Hey I really liked The Good Lord Bird. I was like, ‘Oh cool, yeah, I really like your work, you’re amazing.’ He’s like, ‘Hey, want to be that want to be in the Moon Night with me?’ ‘Yeah.’ … We’re conjuring ancient gods and we’re fighting for good and evil and it’s very exciting.”

David Koresh: When Meyers observed that Hawke was “giving off a real David Koresh vibe,” with his long hair, glasses and candles, Hawke said in apparent seriousness that his Moon Knight character is, in part, inspired by the Branch Davidian leader.

Some Criterion News I Should Have Mentioned Earlier: Rejoice, lovers of physical media.