Elle Director Paul Verhoeven: “Look at American Movies, There is a Total Addiction to Destruction” 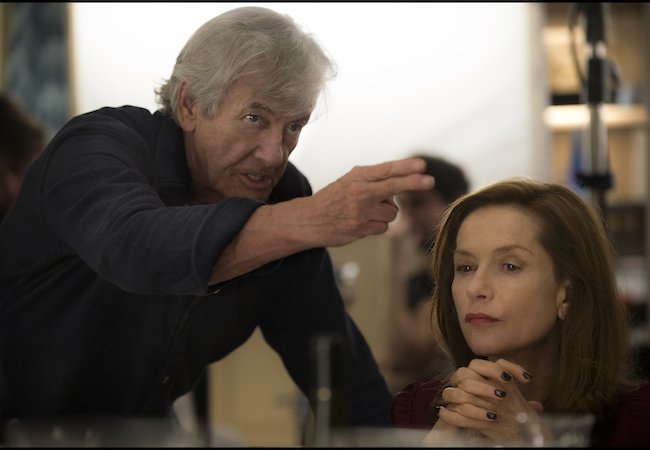 Breaking new ground with a psychological rape-revenge thriller, says Paul Verhoeven, “inspires a certain kind of fear”—especially one that many denounced as “amoral” during its development.

The making of the satisfyingly offbeat director’s latest feature, Elle, brought with it, Verhoeven adds, equal parts “anxiety and adventure,” with those two “A”s not always being mutually exclusive. Elle is hardly foreign territory for the Dutch moviemaker whose works in and outside the bounds of Hollywood have long posed vexing questions about society, and cinema’s, gradual march toward normalizing, even fetishizing, disaster. But the film does complicate and make contemporary the intersection of violence and sexuality that has been at the heart of Verhoeven’s domestic and international productions alike. In the role of video game executive Michèle, a courageous Isabelle Huppert gives heft and weight to a woman who resolves to make a game of her own life by stalking the man who makes the ill-advised and ill-fated decision of raping her.

MovieMaker spoke with Verhoeven about adapting Phillipe Dijan’s novel Oh… to feature length, the casting of Huppert in a role no other actor dared touch, and American cinema’s troubling-yet-fascinating appetite for destruction.

Amir Ganjavie, MovieMaker Magazine (MM): Why did you decide to make this movie? What aspect of the book that Ben Said proposed to you attracted you?

Paul Verhoeven (PV): He sent me the book and when I read it, what attracted me was the fact that I had never done something like that, even though I’ve been trying to do so in my life. If you look at all of the movies that I’ve made, then you see that I’ve been trying to do something different and to go on what you would call an adventure. But sometimes you’re not too sure if you’re even able to do it, and that actually inspires a certain fear. I think that makes you extremely alert and inspired to be in a situation you don’t know exactly. And if you make a sequel, which I’ve done, then you go down a road that’s already clear and the adventure is gone; you are not at your best. If you are on a new adventure where you don’t yet really have a grip on where it’s going, but the grip comes as you do it, then as you get a hold of the project you make it yours. Of course, it’s also possible that you don’t.

So I read what he sent to me and then I said, “OK, yes, there’s a little bit of a thriller, say in the direction of Basic Instinct.” I know how to do that. But what was fascinating for me was the adventure that Isabelle’s character has. She goes from refusing to be a victim to ultimately nearly changing roles. Furthermore, she was involved in a movie where the main character has multiple relationships—with her father, with her mother, with her son, with her daughter-in-laws, with her ex-husband, with her cat, with her rapist. She also has a lot of other relationships, with her secret lover, her best friend, and her girlfriend. So there are about eight or nine, really. And to make a movie about that which would be, let’s say, complementary to the thriller aspect relating to the question of “Who did this to me, this rape?”—that was an adventure. It was something that I could not immediately bring into line with the things that I had done before. That’s why I felt that it would be something new in my life and that it would be good to try.

Director Paul Verhoeven and Isabelle Huppert on the set of Elle

MM: You mentioned Basic Instinct. In that film, you did not try to give audiences a sense of conclusion, but rather, of ambiguity.

MM: But the ending of Elle seems to be more closed. [Spoilers ahead.]

PV: No, I think it is still basically ambiguous. When the rapist gets hit, she gets up and takes the mask off of him. Then they look into each other’s eyes and then she smiles. It’s coincidence, isn’t it? The killing of the guy is a coincidence. It’s a misinterpretation by her son, who thinks that she’s been raped. There’s so much ambiguity already about everything throughout the film, that at the end, there is a new level of ambiguity—in the four last seconds, when you find out that the woman who was basically the wife of the rapist knew everything about it.

Then there is the very last scene when the two women come together. There is a kind of a feeling of, let’s say, a Hollywood happy ending, which was also a tricky decision. The ambiguity of Basic Instinct is really plot-oriented. In Elle the ambiguity is really in the people, their motivations and what their relationships mean to them. It’s ambiguity that is more fundamental than the plot ambiguity in Basic Instinct.

MM: How was the adaptation process? Did you change the story a lot?

PV: Not much. If you read the book then you’ll see that the story and the characters are basically the same. What I’ve really changed is Michèle’s profession. In the book, she’s the head of a writer’s collective as well as the CEO of the company with her friend. Basically, she has this group of 20 writers working for her on television and film projects while she supervises script development. That is in the novel and we felt that it was a very abstract and non-visual thing so we wanted to replace that with something that would be more suitable for film—more visual, more present. In fact, it was my daughter who advised me to make her to the CEO of a game company. That was perfect, because then we started to develop the story of the game, and that is in some way a counterpoint or parallel to the main story, isn’t it? It’s also about a certain kind of a monster that rapes a woman. But all of that being said, her profession was really the only fundamental change.

MM: How was it to work with Isabelle Huppert? Was it difficult to convince her to be in the movie?

PV: No, no, no, no, no. She had actually already called the writer and the producer of the movie before I was even there, so she definitely wanted to do it from the very beginning. We decided at the beginning to do it as an American movie, which is why I have an American scriptwriter and we rewrote the story completely for the United States. Then it turned out that we couldn’t find an actress who wanted to do it here. Ultimately, after two or three months of trying, we went back to France and made it again as a French movie. However, Isabelle already wanted to do that before I was part of this movie.

When we came back I said, “Sorry, we wanted to do it as an American movie, but it didn’t work.” Then we asked her if she is still wanted to do it and she immediately said, “Yes.” I didn’t have to talk about anything. I mean, we didn’t talk too much about what this character meant, or how it comes to be that Michèle, at a certain point starts to call the rapist when she has an accident. Then she goes into the mode of trying to find out who it is. She is really trying to find out why he did it. It’s not a revenge movie in any way, though you could say that it’s divine punishment at the end. However, I was never trying to introduce any moral aspect regarding the character’s really strange turnaround.

PV: In fact, Isabelle understood from the beginning what she wanted to do. Our understanding coincided without us having to talk. We talked about specifics: “Are you sitting there?,” “Do you have these shoes or those shoes?,” that kind of stuff. “Do we get up now or walk to the window or not?” “OK. You do first that.” Very practical matters. However, we didn’t discuss the psychology in any way.

PV: We gave them the American script, the Americanization of the French novel, which was changed to be set in an American city like Chicago or somewhere similar. Then they all just said, “No.” I don’t want to give you the names because that wouldn’t be fair, but there were five or six actress that we went to, and none of them wanted to do it. I don’t know exactly why. I guess there is a difference between reading the script and seeing the movie, isn’t there? Now you see the movie with Isabelle Huppert who makes everything look “normal” because she’s authentic in her acting and you don’t really doubt her. However, if you’re an actress reading the script then you might think, “I would never do that.” It was a moral situation in terms of not wanting to play a character who is raped and then moves on, in the way that this character does.

And so after two months of going to various actors one after another and being told “no,” we realized that it was not going to work. It was really Said who called me and said, “Paul, I don’t think we can make this movie in the United States. We won’t find an actor with a big name who wants to do it.” And of course the character in the novel is 50 years old so it also wouldn’t be an actress that we know. I mean, if you haven’t been discovered by the time you’re 52, then you’re probably not very good. So it was clear that you would basically have to find an A-level actress. So Said said, “We have to do it as a French movie. And are you willing to do it in French?”