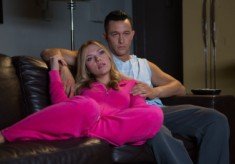 Onscreen charisma translates to its behind-the-camera equivalent less often than one might think, but Gordon-Levitt’s directorial touch is delightfully self-assured—unsurprising, perhaps, as the man is a short-film-junkie. As Gordon-Levitt tells MovieMaker, “I’ve been learning about [moviemaking] by either being on set and watching directors or by making my own short films. For my 21st birthday I bought myself a copy of Final Cut Pro, and ever since then I’ve been making countless projects.” Well then. The film wears its heart out on its sleeve with its pithy, on-the-nose dialogue (Shame, it isn’t)—but its cast are game for the challenge of bringing clichés to life with soul and verve, and the results are energetic (as is the film’s Tumblr page), fun and heartwarming. MM

A Charlize Theron and Keanu Reeves Action Movie? ‘I’m All About It,’ Says Theron