Alternate Universe: A Rescue Mission is a fun and family friendly sci-fi film about two orphaned sisters who build a science project that opens a portal to another world.

A quick jump into this other world finds their parents alive and well. They do what any self-respecting children would do—jump through without thinking to find their parents and bring them home. But what they find in the alternate universe is the evil world of Verstag Industries, run by the villainous Verstag (Steve Guttenberg). Will the girls get their family reunion or be subject to indexing by Verstag and his guards? (Note: I hope you can sense the tongue-in-cheek writing.  It’s purposeful as there are some comic elements to this film.  Hey, I grew up in the ’80s when Star Wars was not only science fiction, but adventure and a touch of comedy. Laugh it up fuzzball.)

Directing this film was challenging even without it being a science fiction film. We had an ultra-low budget. We were constrained with locations. And we had 12 groups of teenagers (totaling close to 200 kids) that would be rotating onto the set each week to apprentice alongside the crew.

One of the largest challenges was to create the dystopian state—the anti-utopia, the alternate world, the police state—on a shoestring budget. Perhaps the most intimidating aspect of that challenge is the expectations of the audience. Today’s audience has been trained to look for science fiction films that are larger than life. With massive budgets come massive green screen and CGI effects that are bigger in every new film. Thousands of foot soldiers and armies, spaceships, tanks, and drones. Enormous banners that show the power of the state. Huge sets. Huge casts. Bigger than reality.

A comparison of the recent Star Trek films (with Chris Pine) to the original Star Trek series (with William Shatner) illustrates the differences in budgets through the bigness of the effects.

How were we going to achieve the same effect on a greatly reduced budget? We couldn’t hire thousands of extras or do huge CGI effects, so we needed to create the dystopian world in a new way. We had to explore innovative ways to tell the story, and hope that the audience would come with us on the journey.

Here are some of the things we used to overcome this challenge: 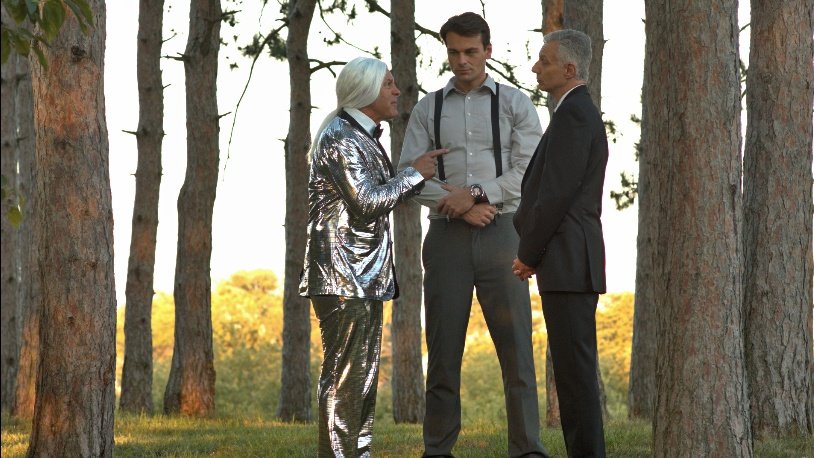 We secured the locations through a partnership with Aurora University. Logistically they worked great for our needs as a crew, having 200 teen apprentices. However, these locations were visually challenging to the original concept of the script. Many of the locations were sparse, white, cinder block rooms. Long dark hallways and confined spaces.

If the audience expected elaborate sets and exotic locations, how could we accomplish that given the realities of the location?

That’s when it dawned on me—why fight something that you can use to your advantage. We thought, “Why can’t the girls arrive in a stark world that’s absent of life?” Sort of an anti-dystopic state where everything is void and empty?  Another thing that Aurora University had in spades was staircases. We rewrote the second act of the script (when the girls first enter into the alternate world) to create a world that is mostly staircases, long hallways and stark, empty spaces.

It seemed like a massive re-write, getting rid of the six floors of eerie evil drones, but when we replaced that concept with room after room of virtually nothing, it took on a similar “out of this world” tone.

Filmmakers can always take solace in this fact:  You’re not the only person that has faced this problem of creating in a limited environment.

As we were rolling through storyboarding my cinematographer, Ricci Pier Reinbold, and I began looking at models of ’50s and ’60s television shows like The Twilight Zone. Television in this period always had budget constraints. We wondered, “How would they approach a subject like ours?”

This took us down re-run lane where they used the fisheye lenses, bending reality through the camera. Minimal lighting and vacant sets were a far more normal “alternate reality” than we’d thought. We felt that the shooting style would add comically, creatively, and enhance the tone in our situation.

What was really exciting about this kind of filming style is that current audiences are not used to it. By pushing this method just slightly further, we created a comic tongue-in-cheek overlay to our dramatic stark setting, perfect for family friendly sci-fi.

The film is broken into three acts. The first act is where we meet the sisters in the regular world. The second act is where the girls jump to the alternate universe. Act three was to take us into the enormous, horrible, fascist police state to meet our terrifying villain. Given our constraints, how were we ever going to fulfill the big budget expectations of the audience? I was kept up at night thinking about how I could turn this in another direction yet still fulfill audience expectations.

In storyboards and design, while we were drawing on the ’50s and ’60s television style shooting, something dawned on us—the USSR, the Soviet Union, the ultimate police state. I remembered as a kid the Soviets would not disseminate the best technology (or the best of anything) to its people. They withheld the best technology keeping it for the themselves, the elite.

So we rewrote act three slightly modeling off the Soviet Union. The girls arrive in another universe where the villain is so cheap that he has everyone working for him with technology that’s a solid 20 to 30 years past its due date. A world of laser disks, typewriters, and adding machines. A world of pencil pushers and menial labor. We were creating sort of an unorthodox police state.

Our production designer Robert Petril frequented the vintage resale shops. We went dumpster diving. He found things that we had forgotten about, like the rotary phone and the hand crank ditto machine.

We then worked to get the costumes to match, again fortunate that many of the costumes we chose were dirt cheap or loaned. White shirts, simple dresses, make-up and hair that looked like something out of the late ’50s early ’60s. Cheap James Bond.

Even the Verstag Industries signage that Petril created reflect a very tongue-in-cheek communist propaganda. His party symbol, an evil bunny-rabbit clad in a red circle, captures that comic essence.

We found great partners in our equipment with Tribeca Flashpoint Academy lending us their Blackmagic Cinema cameras. What made the Blackmagic a great choice for us was its ability to have great latitude in light and stops, and its flexibility in color correction. It helped us to separate the looks of acts one, two, and three without having to physically create different worlds with massive light and set creations. We could create that in post. So now our stark environments in acts two and three could be enhanced with color correction creating a mushed, black grayscale world. The final climax where Verstag is trapped is also enhanced with different color.

With the choice of ’50s and ’60s style shooting and design for acts two and three, Reinbod and I did one more round of story adjustments, in particular small tweaks to the dialogue. These tweaks give a strange, old-fashioned match to the shooting style and design. The people in the alternate world use sayings like “hold your horses” and “kiddo,” which, in addition to Steve Guttenberg’s odd dialect, create a jarring contrast to the normal world the sisters are used to.

One of the most important things that helped us in our low-budget police state environment was the actors. Their belief in what we were creating brought it all together.  When faced with an ultra low-budget environment, story and acting often times can pull you through. Massive green screen, CGI explosions, and elaborate sets are just out of reach when you’re creating at this level, so the basics of story and acting are most important.

We focused on keeping our characters naturalistic and straight. These are people living in this world. They are trying to survive. From our perspective their situations might be comic or contrived but in this drab, stark, and gray world these people are trying to make a living and get their benefits.

Then Steve Guttenberg came into the picture. He was great to work with and really got into the film and character we were creating. We knew we had to create a villain that would stand out against this blah place. Steve created that villain, suggesting the wig, the accent, and outfits. He saw the antagonist as the peacock in this world, like some left over East German dictator/celebrity chef, at the same time dangerous and fantastic.

Those are my five easy steps to creating a dystopian police state on a two-dollar budget. When you’re creating a sci-fi film and you can’t afford any type of large-scale deus ex machina effects, focus on the basics—story and acting—and then look for where you can add innovations in shooting style and design. Don’t be afraid to look to the past for inspiration.

Sometimes you’re given a certain set of circumstances and instead of fighting them you might have to change your story to turn them into your strengths. In our pursuit of the police state we did not have the capability to create the grand expectations of the audience so we went against the grain. I think that’s the exciting challenge of creativity. You are within a certain set of rules and confinements and you have to come up with solutions. Solutions that without those constraints you would never come to.

Alternate Universe: A Rescue Mission is available on Digital, VOD and DVD through multiple platforms. Special thanks to Steve Guttenberg, Harry Lennix, US Congressman Bill Foster, and the scientists from NASA, the University of Chicago, and Adler Planetarium.

A Bird in the Hand: The Journey of Birdboy: The Forgotten Children From Personal Graphic Novel to Hand-Drawn Feature
Art of Darkness: Hostiles‘ Scott Cooper on Genre, Race, and the American Soul