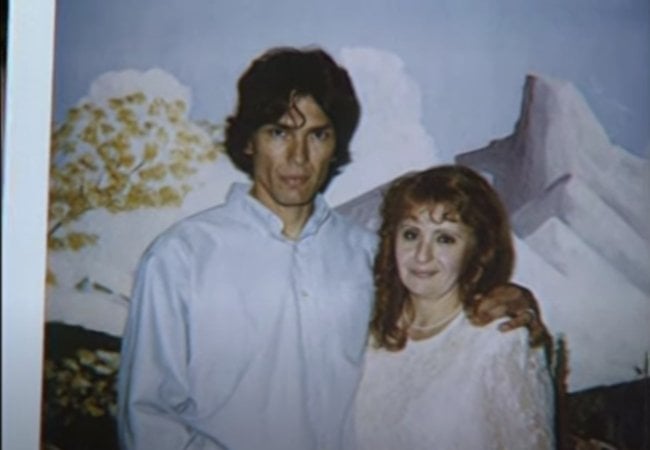 Doreen Lioy is different from other Night Stalker groupies: She married him.

If you’ve seen Night Stalker, Netflix’s new four-part docuseries about notorious Los Angeles serial killer Richard Ramirez, you know all about his penchant for Satan-worshipping and the women who mailed him love letters and visited him in prison during his murder trial.

Though Doreen Lioy is never mentioned in the Netflix docuseries, the two started their courtship in 1985 after she saw his mug shot on TV and wrote to him in prison. Although she was present for his murder trial that year, during which he was convicted on 13 murder charges, Lioy remained convinced of his innocence.

The two wrote a total of 75 letters back and forth over the next 11 years, and in 1996, they were wed at San Quentin State Prison, where Ramirez was on death row. Lioy wore a white $148 wedding dress embellished with pearls, according to the San Francisco Examiner.

Lioy was a 41-year-old magazine editor, self-described virgin and practicing Catholic at the time she married Ramirez — it seemed that opposites attracted for this Satanist and church-going duo. Although she knew the pairing would seem crazy to others, it was a risk she was willing to take.

“It’d be hard for me to understand if my best friend came to me and said, ‘You know, this guy Timothy McVeigh, who just got convicted? I really think he’s cute and I’m gonna write to him.’ I mean, I would think that’s kind of strange,” she told CNN in 1997.

Even after her family disowned her, she stuck by her man, she told CNN.

“I can’t help he way the world looks at him. They don’t know him the way I do,” Lioy said on her wedding day in a televised interview with KRON 4.

But in 2009, after DNA evidence linked Ramirez to the rape and murder of 9-year-old San Fransisco girl Mei Leung, Lioy and Ramirez split.

But Lioy was not the only woman linked to the Night Stalker after his conviction: Geraldo Rivera introduced a woman named Christine Lee as his fiancee on his talk show, but she was notably tightlipped about their relationship, besides saying that they never kissed because he was always behind protective glass:

The Night Stalker: The Hunt for a Serial Killer is now streaming on Netflix.

Yes, That Chuck Norris Tweet Is Real, and No, He Was Not at the Capitol
Rundown: Armie Hammer Exits Shotgun Wedding; What Night Stalker Leaves Out; David O. Russell Adds A-Listers