How to Direct Actors: Advice from Actor-Turned-Director Nick Sandow of The Wannabe 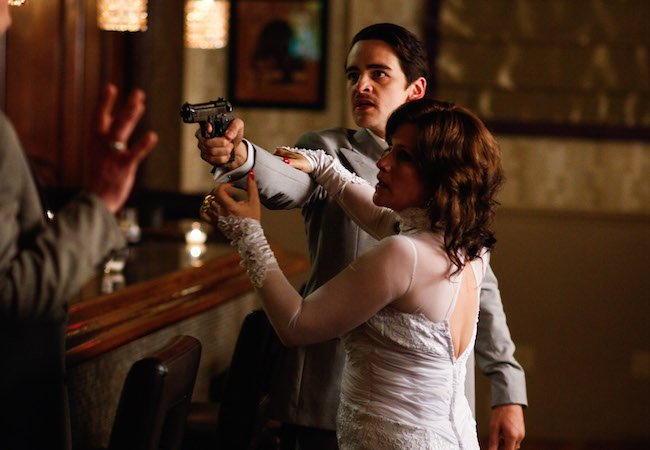 On a typically tight indie production, getting any rehearsal time at all is an uphill battle.

You’re dealing with actors’ schedules, budgets, producers, agents—it’s all a bit of a mess, and no one but the actors themselves are willing to help you pull off rehearsal. Luckily, actors can bring way more to a piece than just a full emotional life and smart blocking.

Start to engage the actors early in the script rewriting process because there is often a lot of time then, while you’re waiting for the money to roll in. Get an early commitment and you can start the working process right away and develop a language and mutual trust. I let my actors know that any idea they bring to a script is on the table. The script becomes ours; it’s a total collaboration.

This way, when we do get into that awful, cramped rehearsal period, the actors have already taken ownership of what exactly each scene is trying to say. By then, we’ve built an atmosphere where there are no mistakes—just lots of questions. When I myself act, if I feel safe, I’m free to explore moment to moment instead of questioning what my next line is, where it is I belong in space, and what is ultimately supposed to happen in the scene. It all just happens.

If you are lucky enough to land a bigger name actor with a small window of availability, get them on the phone as early as possible. I begin by mining his or her specific understanding of the role. I do lots of listening without trying to push my ideas too early. Going through each scene, I ask the simple questions: What does the character want in the scene? How is he or she going about getting it? Why does the character want this? Where is the character coming from and going?

I like to have these conversations in private with an actor so as to not overly influence the other actors in the scene. And make sure everyone understands that these answers aren’t definitive. The value of this process is in the search. Hopefully, as you seek to answer some questions, more are raised. Patricia Arquette plays Rose, girlfriend of the mobster-idolizing protagonist Thomas, in The Wannabe

I am an old actor and a young director, and a believer in a style of shooting that allows for rehearsal on set. I know producers cringe when they hear this, but it’s doable. It takes a commitment to what an actor can deliver in the moment, on set. My priority is always clear: setting up an atmosphere where what’s happening in front of the camera, between human beings, comes first.

My first feature, Ponies, was based on a play written by Mike Batistic, which I directed at Michael Imperioli’s theater, Studio Dante. The film starred John Ventimiglia, Kevin Corrigan and Babs Olusanmokum. The film was all dialogue and one location, an off-track betting parlor. For the most part it played out in real time. We shot it in only eight days.

Johnny and Babs were in the stage production, while Kevin came on board without having had that rehearsal and production experience. We made the film two years after the play production, though, so I knew we couldn’t pull it off without extensive rehearsal. So we rehearsed for two weeks in a friend’s empty storefront. The first week I worked with the actors breaking the play into manageable shooting chunks according to different locations in the parlor. We spent that week slowly getting on our feet. The second week I brought in the camera. We shot with two handheld cameras, documentary style. I wanted to allow the cameras and actors to learn to dance together, so we could just keep rolling and everyone had a sense of what would happen and where we would be in space. We sometimes shot 15- or 20-minute takes. It was insanely exhausting, but the actors got to live inside that space, and we would all get lost inside it as this was happening.

My second feature, The Wannabe, was a different animal. The script was more conventionally structured with lots of locations. I shot The Wannabe in 21 days with 40 locations. I engaged the actors very early in the process while we were hunting for money. Lead actor Vincent Piazza was the first on board and he started working with me on rewrites of the script. We would take different ideas he had for character and translate them, adding scenes and removing others, filling the story with character details that were personal to Vincent. I did the same thing later on with Patricia Arquette.

When we were finally financed, everything happened very quickly and the time I’d wanted for rehearsal was quickly cut. I managed to get Vincent and Patricia in a rehearsal space for a few days, which we spent getting the pair familiar with each other as physical beings. They were playing lovers, so it was important that they have the opportunity to do this and feel safe—even with this crazy third wheel of a director who was always watching them.

I made up for the lack of rehearsal time by carving a few minutes out before each scene for the actors to explore the set while DP Brett Pawlak, first AD Duccio Fabbri and I would watch and adjust things. The three of us had spent a month going through each scene and shot-listing, but we knew that we wanted to leave space for the actors’ choices. It can be plenty scary for a DP to work like this and also hold onto the integrity of the visuals, but, thank god, Brett was young and fearless and game for any challenge.

Here’s an example of this process. In the opening scene of The Wannabe, which was shot exclusively on location, Vincent’s character Thomas is getting ready to go to a block party held by his hero, John Gotti. That day, I walked onto the location with Vincent and I introduced him to his bedroom set. I asked everyone else to clear the set, and I stood back and watched him begin to explore all the realities of the bedroom. I saw him go into his dresser drawer; I could see he had a question, an idea.

He said, “I think this is where he keeps his money.”

What money? During the script development process, in fact, Vincent had an idea that in this scene, Thomas would have in his bedroom many dollar bills wrapped by a $100 bill. I took a note for props to make sure his money was in there.

The same thing happened for all the other little details we’d discussed before this moment. Thanks to these 10-15 minutes we carved out, Vincent had then taken ownership of Thomas’ bedroom. Afterward, I gently invited the camera in to watch Vincent moving around the space. We began to light the scene around his action and movement, so when we began rolling, Thomas was moving around his bedroom instinctively.

During shooting, I would go behind the monitor for the take, but as soon as we’d cut, I’d go directly to the actors. I would constantly take their temperature, keeping a direct line, an intimacy with them. I’d touch them, huddle with them, observe if they’re stuck, if something is holding them up. How could I help free them up? It’s a very codependent relationship. I think in many ways I look to them for answers. What is this scene about? What else can it be?

Get familiar with all the little bumps and traps that can arise on a set, especially for actors who come in for a couple of days for a smaller role. It’s not easy just stepping onto a set that’s been up and rolling for a bit. Everybody knows each other already, and they all have a shorthand worked out. I give these actors even more space. I encourage them to make the set theirs and not to worry about the dialogue. “We all know what needs to happen in the scene…let’s see how we can get there.” If things start to go astray, I gently lead them back.

If you constantly take your actors’ temperatures, it becomes obvious when they’re struggling or hitting a block. It could be small stuff like crossing a room, for example; an actor moving because it says so in the script, but it’s not in their body yet. Step in and ask, “What can I do for you? I can see you’re struggling with that cross—let’s talk about it.” Usually, just by opening up the process to discussion, the actor will find a solution. Or sometimes you realize the cross never made sense in the first place.

At other times, I can sense when an actor is pushing to achieve a certain emotion, and it’s just not coming off organically. I try to diffuse the pressure of, say, having to cry on the spot. I give the actor permission to command when we start rolling, and when we cut. If the emotion’s not there, he or she can stay in the moment until it is. We will just keep rolling. Lifting the time pressure and giving that control helps actors settle down and drop into what they’re feeling.

Every actor works differently. What works for one may be an absolute nightmare for another. A good director creates a space and a language unique to each actor. When I’m directing John Ventimiglia, we don’t have to talk. He looks at me, I shrug and scratch my head, and he says, “I get it, I get it. Let’s do one more.” When I’m working with Michael Imperioli, we talk at length beforehand. I tell him what I’m thinking, and he asks lots of questions. Then he shows up, like a plumber with a huge bag, starts pulling out his tools and goes to work. With Michael and Johnny, it’s familial. But I don’t always get to work with people I know well.

Take, for instance, Vincenzo Amato on The Wannabe. I was a fan of his work, but I’d never seen him play a heavy, like the character Richie, before. He was so sweet and personable that I was scared about him being able to pull off my idea of the character. I was tempted to project my own ideas upon him, but my instincts held me back. Slowly but surely, the more I watched what he was doing, the more I discovered his brilliance. It wasn’t obvious to me until I got behind the monitor how much he held the frame and all he was communicating with just his eyes. If I’d stuck on my ideas, I could have very easily stepped all over the amazing performance he delivered.

I’ve written things, directed plays, films, made paintings, sculptures. There is nothing more vulnerable than acting because it’s you, your body out there. Actors are picking and prodding at their emotions, struggling to understand their own existence. They’re naked (in a sense. Sometimes they’re literally naked.)

It’s what I know best and how I’ve come to try to understand the world around me. So for me, directing begins and ends with actors. MM

The Wannabe opens in theaters on December 4, 2015, courtesy of Momentum and Orion Pictures. This article appears in MovieMaker‘s Complete Guide to Making Movies 2016.

The Cardinal Rules of Crowdfunding:The Five Basic Tenets You Need to Follow for a Successful Campaign
A Set Fit For a King: Nine Production Design Tips from Macbeth Show that Economical Can Also Mean Beautiful