Along For the Ride: How I Spent Three and a Half Years on the Road With Dennis Hopper’s Right-Hand Man

Let’s rewind to over 20 years ago, when I was a teenager.

To best frame up who I am, for the sake of time, here we go: Born in Los Angeles, California. Parents divorced. The Clash saved my life. Mostly, I was a so-so actor in Hollywood at the time who was trying to be a good one. I had chalked up a few commercials and a support role in an AFI film to my credits, but the engine was stalling because I was tired of only reading for ’90s kid’s movies. Due to my sorted upbringing, the good news for me was, I had seen a bunch of “inappropriate,” by most ’80s parenting standards, films at an early age I probably shouldn’t have—like Blue Velvet.

One day I was taken to Santa Anita Racetrack with my parents who were attempting a reconciliation. We walked into the Turf Club, an old Los Angeles hangout from the glory days, and I was forced to wear a blazer, so I wasn’t exactly happy to be there. Suddenly that all changed when I saw a commanding figure in the center of the room smoking a cigar: Dennis Hopper, right in front of me. I was speechless as I watched him say absolutely nothing but hold the center of the room’s attention. Despite being completely shocked, I knew I had to say something to him. I walked over and somehow got the guts to talk. He shook my hand, and although I couldn’t get many words out, I told him how much I admired his work. It was just one of those great moments for me, meeting someone who had that effect on me. I’m sure that happened to Hopper a few times every day, but it changed me forever.

When I got home I took a bus down to the legendary art-house video store Rocket Video on La Brea, in the heart of Hollywood. I asked one of the 20-something slacker clerks if they had any other Dennis Hopper movies like Blue Velvet, and he walked me over to this section and pointed out a few things. My eye was drawn to completely sunbaked, dog-eared VHS tape of something called The Last Movie. It looked like it could have been a bootleg. A much younger Hopper graced the cover with a cowboy hat, a cigarette, and an attitude. To make a long story short, I never returned the tape. I watched it over and over again. Rocket Video left me tons of messages and wanted it back. The late fees piled up. The damage done from taking The Last Movie was still on my credit report as of seven years ago, finally paid off with the funds came in from a screenplay option.

Simply put, The Last Movie changed my life. It’s the reason I quit acting, picked up a camera and became an artist.

Peru, 1970. Dennis Hopper on the set of The Last Movie. Photograph by Dennis Stock

The more I wanted to learn about the movie, the more information became impossible to find. Peter Biskind’s book on American independent cinema, Easy Riders, Raging Bulls, mentioned that Hopper was a problem and the film destroyed him after his meteoric rise from Easy Rider, but not much more. After helping open doors for so many other filmmakers like Coppola, Hellman, Bogdonavich and Rafelson through what’s sometimes called the “New Hollywood” Movement, it seems Hopper kind of vanished after Easy Rider, the film that changed everything. The myth was that Dennis had flamed out in a barrage of chicks, booze, coke and machine guns somewhere in New Mexico. I would later find out that this was all true to the 10th power but there was a helluva lot more to it.

About three and a half years ago, I got a phone call. A friend of mine that knew how much I admired the Dennis told me she wanted me to meet with his long-time right-hand man. They had all spent time together on a film somewhere abroad in the 2000s. Now that Hopper was gone, I jumped at the chance to meet this window into a hero.

We met for lunch in Hollywoodat the legendary Musso and Frank’s. Sitting across from me in the red leather booth was a cross between a heavy from some John Huston movie and everything that the psychedelic drug movement embodied, wearing a bright and colorful vest with tiger stripes: Satya de la Manitou. I was surprised that Satya didn’t end every sentence with “man.” He leaned over and confided that “vests” were his trademark. For some reason, he was recording our conversation with one of those legal cassette recorders circa 1996. At the time, he seemed road weary and adrift with Dennis being gone. He started by giving me the basic greatest hits of Dennis Hopper, from Easy Rider to Speed.

I stopped him. “You gotta tell me everything about The Last Movie.” He was taken aback and suddenly smiled. In a low voice, he said, “That’s the reason I spent over four decades working with Dennis Hopper.” A great friendship was born.

Over about a 150 cups of coffee with Satya, I found a complexity to him that was fascinating. He had put many of his own goals on hold to help Hopper because he believed in him at a time when many had counted him out after his Last Movie “Hollywood blacklisting.” I also found out that the film had been shelved by the studio heads Hopper clashed with and that’s why it was so tough to see. It had also won the top award at The Venice Film Festival in 71. But the most importantly he told me that Dennis’ felt that it was his greatest artistic achievement. In listening to him, he told tales from his “virtual hidden storage locker” of stores from his days with Hopper. Under tons of call sheets and manilla envelopes, we were unearthing the great memories. I felt the best thing to do was help him to tell the story he’d been telling me. Turn on the camera, and channel it all through him.

I had originally envisioned a short as I had no money. I called in just about every favor I had banked over the last 12 years working in this town. People started seeing the footage and saying, “This is a feature film.” 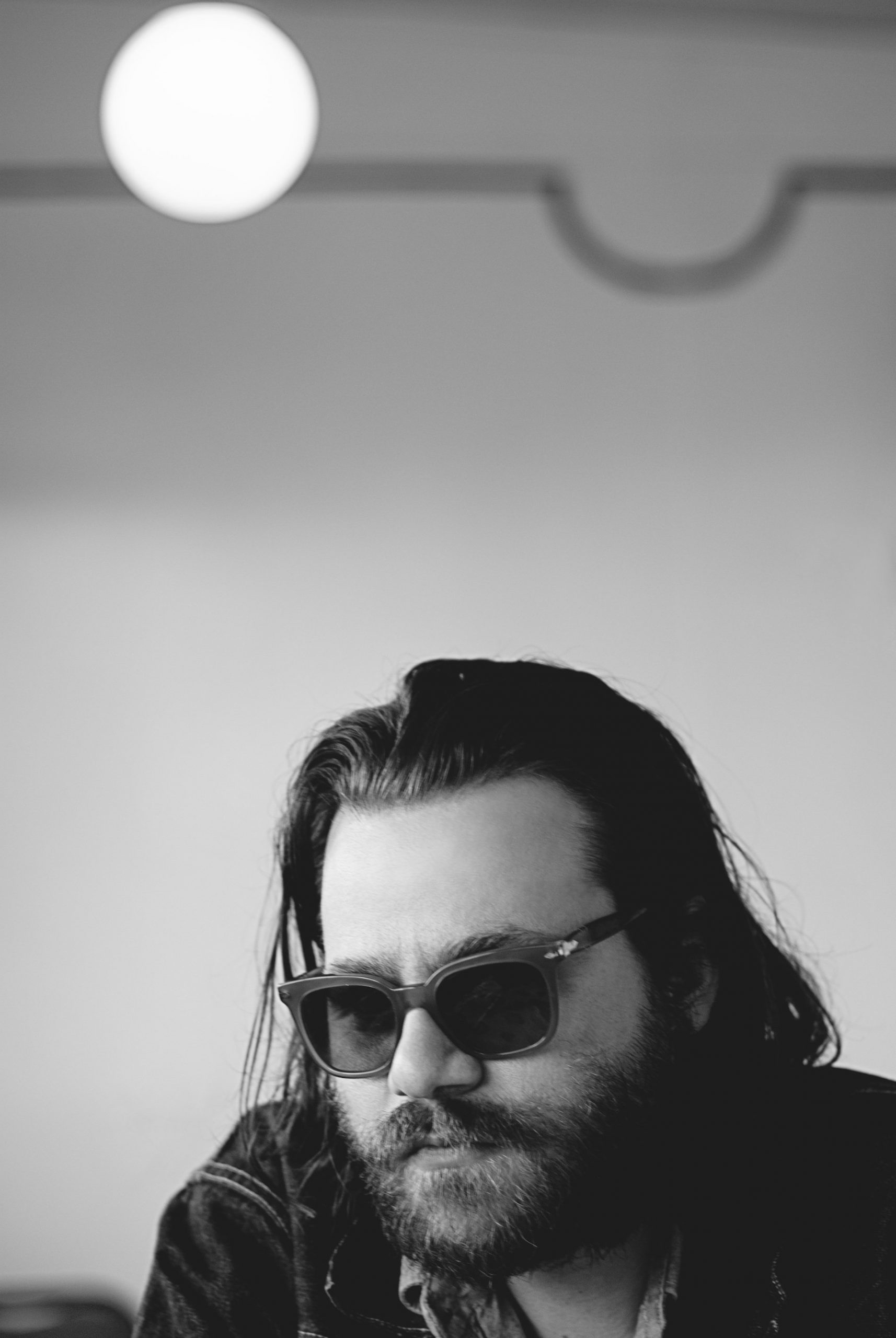 This wasn’t an easy pitch. Along For the Ride did just about everything that Hollywood doesn’t want you to do. I shot in black-and-white and featured mostly people who are now over 70 about a film most of the world had never heard of or seen.  And I was going to work unconventionally to most docs and at times completely experimentally.

Let’s just say it was an uphill battle.

We were dead set on telling the story of The Last Movie, which was Hopper’s passion project, all that it cost him, and what it took him to come home. I liked this idea of walking the footsteps of your hero with one of his best friends of all time. And the more people tried to convince me I was insane, and wasting everyone’s time, the more I wanted to throw all those people out the window.

We were loaded with passion, but short of funds, so I decided to go back to my art school roots which meant working with small crews. This look was of paramount importance due to the subject matter. It had to be all of its own while paying tribute to the heroes (both the known and unknown who were really there). This was the first time this story was being told, so it needed to be recorded well for posterity. 1ks and old-school lighting techniques were employed against vintage lenses when I could get my hands on them. Sometimes Leicas and sometimes others. Cameras were always changing due to availability, so I remembered which one of my big photography influences Diado Moriyama always maintained “A camera is just a tool. It’s the person using it.”. Some of my favorite things at the end of the day were shot on the cheapest gear but we just meticulously worked to craft the appropriate salute to the genius and brilliance of Dennis Hopper.

This is as much a film about Dennis as it is about Satya. And the others who lived through it. Friends like Ed Ruscha, Wim Wenders, Dean Stockwell, David Lynch, Stella Garcia, Russ Tamblyn, Tony Shafrazi all helped shed light on Dennis Hopper’s amazing contribution to film and the art world.

The journey took us from that booth at Musso & Frank, to a shack in the middle of New Mexico, to a secret recording studio in London, to New York as Satya retraced his role in Wim Wenders’ The American Friend, and eventually to a 14,000 foot elevation in a remote Peruvian village where The Last Movie was shot in 1970.

The production evolved and was so different and off guard it inspired others to join us, work with us, and help us. What Satya had done for me, directly or indirectly had reinvigorated my belief in holding steady to your art. Something that had been slowly washing away from me after spending years in Hollywood trying to make things for others people.

Satya woke me up again and reminded me of why I had gotten myself into all of this as a teenager after seeing The Last Movie.

Along for the Ride opened November 3 in New York and will open in Los Angeles in December with a rollout to follow.

Exclusive: Watch Aml Ameen Navigate the Dark Side of Wall Street in This Clip From The Price (Video)
Cinema Law: Enforcing Your Rights (When They Haven’t Been Paid For)