David Shields Wrote the Book on Interviews. Nick Toti Made the Movie 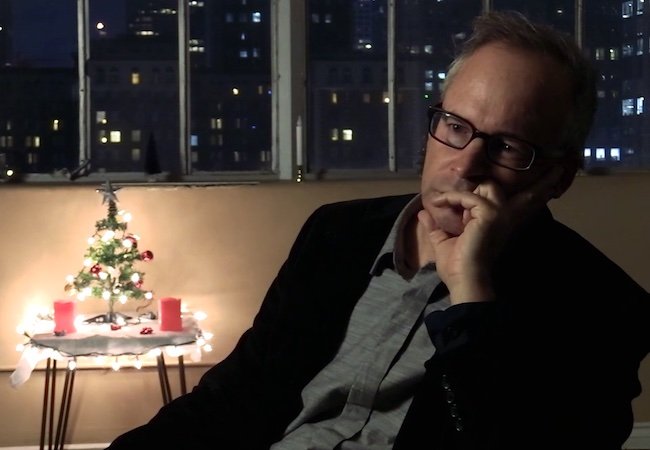 David Shields has given hundreds of interviews to promote his 22 books on everything from race to sports to sex to J.D. Salinger to Donald Trump. He’s kept a record of every question, and uses those questions in the literary collage of his 23rd book, The Very Last Interview.

Director Nick Toti and writer Rachel Kempf (who are married) set out to turn the book into a movie, and succeeded. The film arrived late last year, and is set around Christmas — though the book has nothing to do with the holidays. It’s a daring, challenging adaptation, in which one character (not David Shields) delivers probing-to-cruel questions that also serve as a searing monologue as we stay focused almost entirely on Shields’ reactions.

Shields and Toti are our guests on the latest MovieMaker podcast, where we talk about the book, the film, and the nature of interviews themselves. Are they conversations? Sport? How did some of them become so adversarial?

“David essentially had an idea to collect all of the questions that he’s been asked over the past 40 years of his professional writing career. So every question that has been asked in the interview… but none of the answers. And then he basically arranged those questions, and, you know, kind of remixed them and rewrote them as needed. So that they became essentially an autobiography,” Toti explains on the podcast.

Shields says he and Toti share the same approach to creative output.

“Most of the film world is organized around the idea of, ‘How can we say no?’ And what Nick and I are organized around is like, ‘How can we do this yesterday?'” Shields says. “I’m interested in getting books and films done and out and moving on and staying alive through the creative act.”

Though we get to know the David Shields of the film through the questions he’s asked, and whether he seems pained, annoyed, or amused by them, the film also makes us wonder about the motivations of his interviewer. Shields and his interviewer are played by Chris Doubek and Ashley Spillers.

“Ashley’s performance is crucial and I think [her character] not only has an agenda, I think she has many agendas: journalistic, romantic, therapeutic, punitive,” Shields says.

Shields also talks about his belief that an interview is “inherently a seduction.”

“It’s an inherently fraught moment, whether it’s two guys or two women, or a man and a woman or whatever,” he says. “On an intellectual level, a pedagogical level, a journalistic level, a financial level — and occasionally, it has a sexual element, for sure.”

The World to Come Producer-Star Casey Affleck: ‘If You Write More Drafts, the Writing Gets Better’
John Singleton Gave Coming 2 America Director Craig Brewer His Big Break — and Told Him to Always ‘Hire Some Black People’