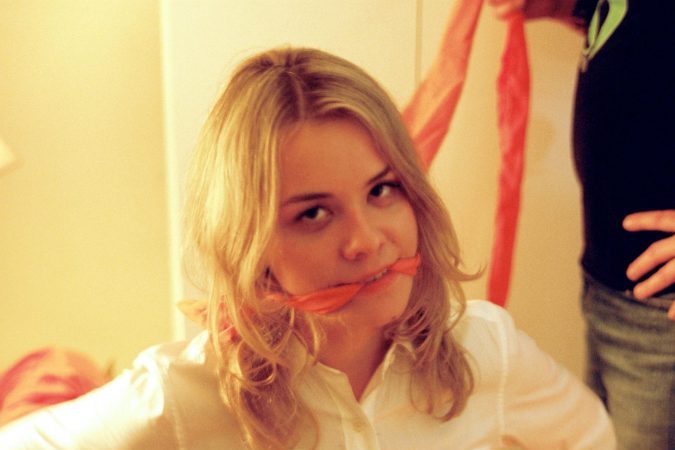 The Scary of Sixty-First, the debut film from Dasha Nekrasova, has a riskiness lacking from most recent American films, starting with its subject manner: It’s an Eyes Wide Shut-style winter nightmare about two young women who move into an apartment that they soon learn was once owned by Jeffrey Epstein.

Nekrasova and co-writer Madeline Quinn’s characters lash out, do drugs, treat each other terribly, and use words that will catch you a serious scolding on Twitter. Does Nekrasova — raised in Las Vegas by circus performer parents, who left Belarus around the fall of the Soviet Union — think she brings an outsider perspective to the film? Or a unique appreciation of speaking freely?

Maybe, she says in the latest MovieMaker podcast, which you can check out on Apple or Spotify or above.

Her parents’ escape from a collapsing country also gives her a vivid sense that it could happen here.

“I don’t it’s going to be apocalyptic. I don’t think it will happen overnight, but I think it will be a slow decline, much like how the Soviet Union was and there certainly are many parallels,” she says.

She notes the COVID-sparked supply shortages creeping across the United States and the world: “My parents certainly never thought that they fled Belarus in the post-Soviet Union to like, wait in a bread line again.”

One thing that seemingly stays constant, though, is the survival of the elite. In her film, and perhaps in real life, Jeffrey Epstein’s death conceals a large conspiracy to protect people in power who behave with impunity. (At the time of this writing, a jury is deliberating the fate of the convicted pedophile’s longtime aide-de-camp, Ghislaine Maxwell.) In The Scary of Sixty-First, Nekrasova plays a mysterious, meth-using investigator called The Girl who tries to solve the dark mysteries surrounding Epstein. Mysterious forces seem to be gathered against her — but so does the glib cluelessness of many of the people who could help her.

The film shares a sensibility of the Red Scare podcast, in which Nekrasova and Anna Khachiyan comedically and bluntly critique the left and right alike with a casual rejection of easy political categorization. We talk a bit about Red Scare, and politics (a subject Nekrasova says she doesn’t really like discussing), as well as the 1998 Whit Stillman film Last Days of Disco, and, finally, the delightful name of her character on the latest season of Succession — Comfrey Pellets — and what that name says about the character.

The Scary of Sixty-First, directed by Dasha Nekrasova, is now in theaters and is available on demand on Friday.

That Time Dennis Hopper ‘Exploded’ on the Set of the Original 1993 Super Mario Bros. Movie
Want to Win an Academy Nicholl Fellowship? Listen to the 2021 Winners (Podcast)