Crowdfunder Pick: "Thou Shall Not Tailgate"

Crowdfunding has become an invaluable tool for the indie filmmaker seeking funds for the start or completion of a project.

And here at MovieMaker, we applaud and champion workman-like campaign efforts. To raise awareness of great ideas and future talents, we will be highlighting a unique project every month during its funding campaign. If you have a project you’d like us to consider, drop us a line at: [email protected].

We hope you’ll share, support, and be inspired by their stories.

Crowdfunder pick: “Thou Shall Not Tailgate”

Synopsis: “Thou Shall Not Tailgate” is a short-form documentary about art car creator, retired postman and minister, the Reverend Charles “Chuck” Linville.  The film is an observational profile of Rev. Linville and his world, which includes two houses and multiple cars that are thematically decorated in knick-knacks, cultural detritus and a host of other random oddities that he chooses.  A cross between a collector, provocateur and outsider artist, Linville stands in stark contrast to the world around him. His artistic expressions comment on politics, religion and fringe culture like no other. Diabetic and approaching 70, he has seen trends come and go, while living and creating on his own terms. By highlighting his art, music and opinions, this film will illuminate Chuck’s unique personality and vision, illustrating how his brand of individualism and originality is vital to an increasingly homogenized culture.

Influenced by the fly-on-the-wall, lived-in documentaries of Les Blank, this film speaks through interviews with Rev. Linville, selections from his music collection and an eye toward the colorful universe that surrounds him. The story will be driven by an audio narrative that will tell his story through conversations, old photos and moments of visual poetry.

Director Greg Hamilton with one of Rev. Linville’s art cars

About the moviemaker: Greg Hamilton has been a film programmer in the Pacific Northwest for the last 14 years, where he has hosted regional premieres, retrospectives and revivals of classic films. He is a board member at the historic Hollywood Theatre in Portland, OR and the West Coast Editor-at-Large for MovieMaker Magazine. This is his first documentary short.

“As much as ‘Thou Shall Not Tailgate’ is a love letter to the weird and offbeat, it’s really a film for everyone,” says Hamilton. “I believe its message of personal freedom and individuality is universal. I want everyone to see and hear Chuck’s story, and relate to his uncompromising and decidedly colorful point-of-view.” 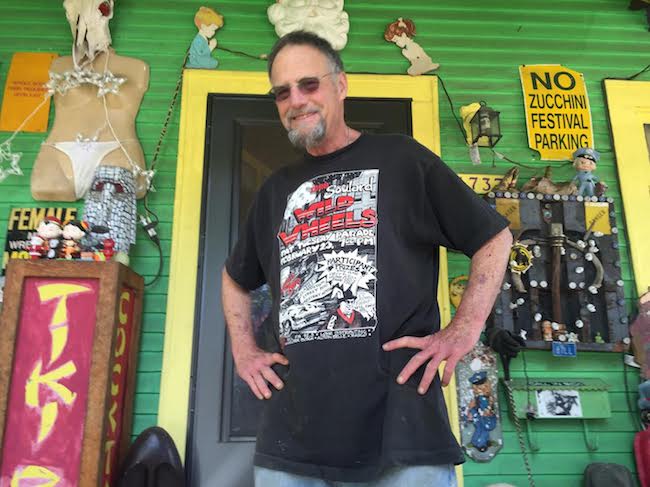 Reverend Chuck Linville, subject of documentary short “Thou Shall Not Tailgate”

Request: “We need finishing funds for direction, editing, various post-production needs and film festival submissions. With this funding, we expect to have a final cut by the end of 2017.

“Every investment is appreciated, and there are a few cool things we have available to contributors to the film, including tickets to opening night, producer credits and even an opportunity to ride in one of Rev. Linville’s art cars!”

Crowdfund by visiting: “Thou Shall Not Tailgate” MM

THOU SHALL NOT TAILGATE Preview from Greg Hamilton on Vimeo.