Criterion Crash Course: Moviemaking Lessons From Criterion’s The Before Trilogy 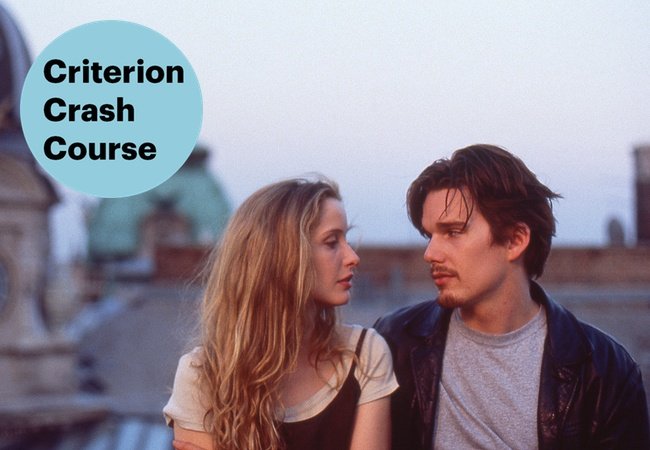 At the age of 35 and with only two features under his belt, Richard Linklater would embark on a project that—little known to him at the time—would gestate over a period of nearly 20 years. Ripped from an experience in Linklater’s own life, Before Sunrise started with a simple idea: Make a love story between two strangers told over the course of a single night. Yet once born onto film, the characters of Jessie and Céline took on lives of their own. For nearly nine years, audiences pondered over the film’s open ending: Did they recapture their love six months later, or did they drift apart, never to see each other again? The answer to this question was eventually revealed with Before Sunrise’s follow-up, Before Sunset in 2004, and, finally, the couple’s relations were explored in greater detail with the completion of the trilogy, 2013’s Before Midnight.

The Criterion Collection’s new box set offers the first-ever collection of Linklater’s trilogy in a single set. Complete with 2K presentations of the three titles, an essay by film programmer Dennis Lim and a heap of interviews, behind-the-scenes footage and video essays, the set contextualizes and cements the importance of The Before Trilogy within the scope of contemporary cinema.

Throughout much of the bonus content, Linklater repeatedly stresses that there was only one way that these films could be made: enlisting the help of actors that could bring their own lives into the work. More than the sum of Linklater’s observations on love, sex, gender and politics, The Before Trilogy is a coalescence of the minds and emotions of Linklater and his stars, Ethan Hawke and Julie Delpy. Though the actors were not credited as screenwriters until the second and third films, their collaborative process was very much fluid throughout each film.

Before starting Before Sunrise, Linklater was working from a skeleton script. He knew where the important beats had to exist and he knew important locations that he wanted to feature—including a first kiss on the Wiener Riesenrad and the ferris wheel iconically figured in Carol Reed’s The Third Man—, but the dialogue was not always there.

Ethan Hawke and Julie Delpy in Before Sunset. Photo courtesy The Criterion Collection

In fact, Linklater was never beholden to any of the dialogue that he did bring to the project. In what can be considered the linchpin to the original film’s plot, Jesse convinces Céline to get off the train and spend the night parading with him through the streets of Vienna. However, the original wording of the scene, according to Delpy, would have never swayed her—and, by extension, Céline—to leave the train. Linklater’s reaction was not to convince Delpy but, rather, to trust her instinct, and the three principles spent the course of a few nights rewriting the scene until Delpy felt that it was a convincing plea to her sensibilities.

Moviemakers can learn much about the power of collaborating with your actors from The Before Trilogy. Linklater’s three films are a testament to the ways in which actors can bring their own interior psychology, motivations and emotions to heighten the identifiability of characters of your written treatment. They can transform the roles you create, all within the context of your original vision.

However, as Hawke is quick to mention in the newly commissioned interview between he, film critic Kent Jones, Linklater and Delpy, that is not always something actors are excited about doing. Hawke laughs as he recalls trying to apply the same technique to his own directing efforts and how it ultimately scared his actors off. So, while collaborating on your script with actors can lead to promising results, it does come with the caveat of requiring actors who are equally up to the task, which may make your casting call a more lengthy and involved process.

Though the addition of feature-length commentary tracks for all three films would have been appreciated, the commentary by Linklater, Delpy and Hawke that’s carried over from Before Midnight’s previous release is a welcome inclusion. Another ported-over feature is a video essay by Kogonada which chronicles Linklater’s cinematic obsession with time, focusing heavily on the characters of Jesse and Céline, as well as footage from similarly themed works by other moviemakers like Francois Truffaut. The video essay, entitled “Linklater//On Cinema & Time,” is short but evocatively captures Linkater’s thematic tendencies in a concise form.

There is also a lengthy interview between Linkater, Delpy, and Hawke taken from Terry Gross’ radio program Fresh Air, which aired along with the release of Before Midnight. This piece is mostly already-treaded ground for any of those who have followed along with the box set’s other interview and behind-the-scenes footage, but is still an entertaining listen.

The strength of the set, especially for moviemakers looking for tips on the upcoming projects, lies in the newly commissioned interviews and documentaries. The aforementioned piece with Jones is the most all-encompassing of the set’s features, and serves an in-depth look at the process that led to the creation of each film. The other interviews and documentaries, including a fantastic interview between scholars Dave Johnson and Rob Stone, work best for those looking to engage with the motifs and thematic layers of Linklater’s stripped-down style.

If The Before Trilogy teaches you anything, it’s that you don’t need complicated plotlines, fancy camerawork, convoluted drama, or a lot of action to make great cinema. Tasked with creating simple narratives, Linklater, Hawke and Delpy rose to the challenge and deliver three of cinema’s most compelling love stories. In a way, these films serve as a guide to finding the heart of your characters, and a lesson in breaking down the elements that can dilute a film. The Before Trilogy works so well simply because Hawke, Delpy and Linklater bring so much of themselves into the work. It’s to Linklater’s credit that he was willing to share the spotlight and let his actors shine. MM