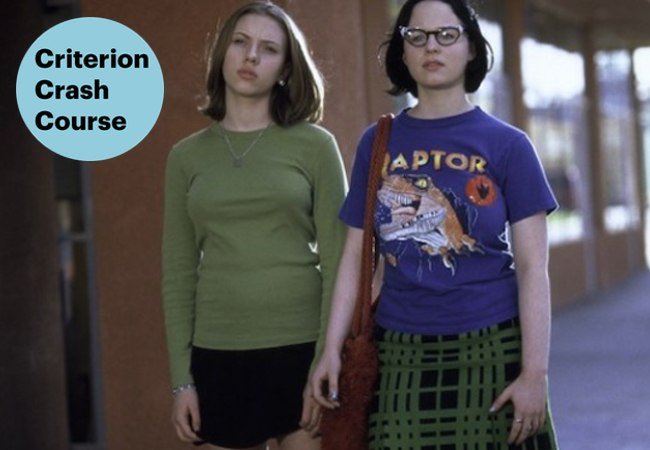 The opening of Terry Zwigoff’s 2001 film Ghost World is somewhat reminiscent of David Lynch’s Mulholland Drive from 2000: beginning, almost deliriously, with people dancing as if plucked from the 1950s, the grain of the film stock texturing their movements, even making the sound of the Bollywood music feel more alive. After two documentaries made nearly a decade apart—Louie Bluie in 1985 and the infamous Crumb in 1994—Zwigoff dipped his toes into fiction and teamed up with Daniel Clowes, who had gained notoriety in the anthology comic book series Eightball, to adapt Clowes’ graphic novel Ghost World, which had been serialized from 1993 to 1997 and had developed a cult following.

There are few people dryer than Enid (Thora Birch) and her best friend Rebecca (Scarlett Johansson), whose recent graduation from high school seems to have only amplified their disillusionment with the rest of the world. They’re sharp-witted even to one another, and that’s all they have: their self-proclaimed bon mots and each other. Their plans for the future—particularly Enid’s—are thrown into the air when they naturally transition into adulthood, or the idea of adulthood, and are forced to reconcile with how their lives are changing and how they may or may not grow and drift apart.

The Criterion Collection’s release of Ghost World features an audio commentary by Zwigoff, Clowes, and producer Lianne Halfon; interviews with Birch, Johansson, and Ileana Douglas; an extended excerpt from the film Gumnaam (1965) featuring the Bollywood dance number from the opening titles of Ghost World; deleted scenes; a trailer; a booklet with an essay by Howard Hampton; a piece by Zwigoff from 2001 concerning the film’s soundtrack, and a mini comic with excerpts from Clowes’ original graphic novel Ghost World. Zwigoff and Clowes’ film had long been rumored, teased, and desired to join The Criterion Collection’s prestigious library, and this new edition brings the film’s sense of melancholy to palpable new heights.

Teen angst in film is often depicted as unruly and violent, from Rebel without a Cause to The 400 Blows, and from Fish Tank to Spring Breakers, and, of course, the oeuvre of John Hughes. But rarely is the teen angst ever portrayed as what it often manifests as: boring, meandering, malaise-filled days of wandering, with only yourself and your cleverer-than-thou comments with your friends. Enid and Rebecca drift from one thing to another, without much connecting them besides the desire for these little activities and pranks and fixations (on music, on pop culture, on cruelty) to distract them from their own existential uncertainty.

Zwigoff’s camera either pans with the characters slowly as they walk across the street, or settles on Enid as she lounges back and listens to “Devil Got My Woman,” and it feels almost like a relaxant, the way that annoyance-based fatigue can wash over you. Thora Birch, who displayed an acumen for playing sarcastic or adrift young people in films like Hocus Pocus and American Beauty, fashions her Enid as like a quasi-Daria. She scoffs and almost everything. Her self-awareness is internalized and rarely exhibits explicitly. She draws things in her diary and for her remedial art class with no explicit motivation beyond a kind of immediate interest. Her art teacher frowns upon this, but, however devoid of “layers” her drawing may be, it’s one of the few things that give her unironic pleasure.

Curiously, Zwigoff is able to identify with his leads’ sense of alienation without necessarily letting them off the hook: so often Enid and Rebecca are cruel for no reason, but Zwigoff and Clowes have an intimate understanding of the paradoxical self-criticality and deep sense of judgment that are fundamental to the characters’ identities. What Ghost World shows us is that rebelling against the norm can be as dull as the norm itself.

When Enid befriends Seymour (Steve Buscemi), her dynamic with him becomes, outside of her friendship with Rebecca, one of the few honest relationships she ever has. The interest is admittedly at first based on how weird she thinks he is: a guy in his late ’30s with almost no friends, he looks kind of odd and his musical taste is esoteric. He has little else to connect with other than obscure jazz. “Now I remember why I don’t go out at all: I can’t relate to 99% of humanity!,” says an exasperated Seymour after a failed attempt at flirting, which really just resulted in him mansplaining ragtime to a woman at a jazz club. Buscemi plays Seymour like a desperate little misfit, his neck arched forward, accentuating every aspect of his oddness, but not without a sense of dignity.

On the other hand, Enid has as much trouble relating to, much less tolerating, other people. “You just hate every single guy on the face of the earth,” Rebecca observes. Enid retorts, “That’s not true. I just hate all these extroverted, obnoxious, pseudo-Bohemian losers.” Her job at the movie theater goes disastrously and her opinion on good relationships is that “only stupid people” have them. Her little bubble, and Seymour’s and Rebecca’s, overlap, and at times they don’t even know how to connect to one another.

The bittersweet nature of female friendships has only been handled with such sensitivity and complexity in a select few films, like Greta Gerwig and Noah Baumbach’s Frances Ha and Diablo Cody’s Jennifer’s Body. The dynamic at the core of Ghost World is hard to parse; it’s one that’s generous and withholding, loving and serrated, fueled by a mix of respect and jealousy. Enid and Rebecca are characterized both by how they are necessary and unnecessary to one another’s lives. Rebecca, it’s made clear, has slid by on her looks to some degree, which, unlike for Enid, takes the edge off some of her cynicism. Boys don’t really care how cutting she can be, because she’s hot. Enid looks far more expressively sour in comparison, ignored by men and soon by her only friends.

And yet, no one else in their “shitsville” of a town has their sensibility—not the anti-Semitic music obsessives, not the dweeby gas station clerk, not the video store employees who don’t know what 8 ½ is, not Enid’s father. And though their friendship is borne out of a certain need for comradery in a hellhole, it’s also borne out of validation.

So, too, is Enid’s friendship with Seymour. However honest it can be, close to Rebecca’s, there’s a strange sense of inequity between them. Given Seymour’s social awkwardness, Enid always seems to have an upper hand. Despite her distance from the world, sometimes she purposefully hos her functionality in it as an advantage. But the gentle shift in how Enid sees Seymour, and how Enid and Rebecca’s relationship evolves, is one of Zwigoff and Clowes’ greatest achievements. Enid finally realizes how frustrating it is to be her and that it’s something to consider. She tells Seymour, “I guess I just need to figure myself out.”

“I think what’s so great about Ghost World is that it captures these characters at a very specific time of their lives,” Scarlett Johansson says in the interview feature “Art as Dialogue.” True, there’s nothing like straight out of high school-dom that plagues one with the pressure to know oneself. Ironically, as Johansson and Thora Birch tell it, even at their pretty young ages, they had a sense of self enough to know exactly what they wanted in and from the roles in the film. It’s nice to see Birch again, who had been off the radar after Ghost World, save for a handful of indie films and TV work. Ileana Douglas is here as well, and speaks about her experience working with Zwigoff and making her director laugh.

The deleted scenes, in rough form, are odd and quotidian in the way that the rest of the film is, including an extended argument between the Greek gas station store manager and a shirtless white guy with a nun chucks, an extended version of a scene in which Seymour tries to sell some of his vintage records to another, even more fastidious collector, Ileana Douglass’s art teacher Roberta explaining an piece in the school art  teacher, an extended scene in Wowsville, a scene with a wheelchair man in a coffee shop, and others. There’s even more a sense of bleakness in these deleted scenes, without the humor to balance the ribald observations of its director and writer.

Perhaps the most interesting on the Criterion set, though, is the presentation of the song “Jaan Pehechaan Ho” from the film Gumnaam (The Unknown), which includes an audio commentary from film scholar Kriti Mira Adhikari. Adhikari sets the clip into context, both within music history and film history, noting that the film is a loose adaptation of Agatha Christie’s mystery novel And Then There Were None, whose racist origins intersect with discussions of racism and art within Ghost World.

Not to be forgotten, though, is Howard Hampton’s essay “Séance in Wowsville”, where he discusses the almost mystical power of the film, its black sense of humor about desperation but total earnestness in how painful life can be in adolescence. Of the final moments between Enid and Rebecca, Hampton writes, “Their short, emotional conversation, ending with them squeezing hands with resolute sensitivity, says more about the twinning of love and friendship and vulnerability than practically any film this side of paradise or Arnaud Desplechin…”

With its leisurely pace and embrace of the mundane everyday—particularly the way that malaise and angst can feel so much like slow motion—, Ghost World resembles Richard Linklater’s Dazed and Confused. In its examination of the malleability and transience female friendship, it operates somewhat like a proto-Frances Ha. But of these ideas and DNA, combined with its observations of desperation and what it feels like to not know how to get, or what to do with, validation, Ghost World has always been in a class of its own. Terry Zwigoff and Daniel Clowes’ film tastes like a vodka cranberry and feels like one, too. It’s allowed to be tart and sharp and honest, just like Enid. MM