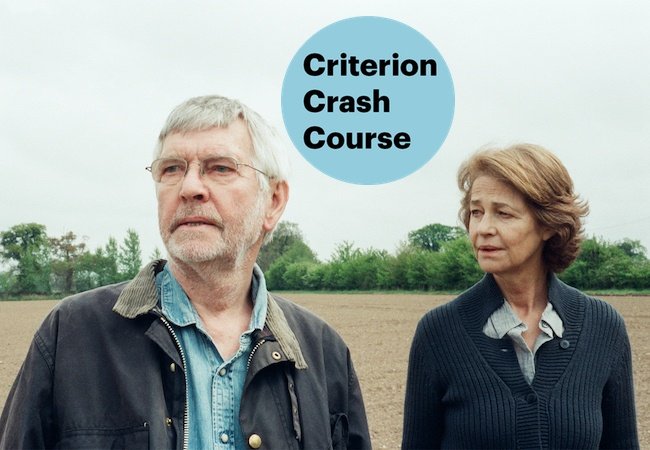 After breaking onto the scene in 2011 with his tender, Brief Encounter-by-way-of-gay-identity at SXSW with Weekend—the story of two men whose hookup develops into an exploration of desire, intimacy and self-knowledge—Andrew Haigh spent some time in television with the short-lived HBO series Looking, a show that was also preoccupied with the changing ways in which we express our feelings within marginalized social communities. Haigh returned to film in 2015 with 45 Years, which premiered at the Berlin International Film Festival. In 45 Years, one letter leaves the previously assumed secure relationship between Geoff (Tom Courtenay) and Kate (Charlotte Rampling) shaken, forcing each to recontextualize their identities both by themselves and in the context of their relationship.

Based loosely on David Constantine’s short story “In Another Country,” Haigh deliberately shifted the perspective of the story to allow the film to be viewed through Kate’s eyes. The letter, which reveals that the body of an old lover of Geoff’s has been found, sets into motion the way the two must navigate trust between them. As Kate continues to learn that this woman held a place in Geoff’s life that was much closer than she had originally been led to believe, Kate considers the time she and Geoff have spent together as a couple, just a week before their 45th wedding anniversary party.

If Haigh’s Weekend reveled in the invasiveness of its technique, the camera so close to each of the men, whether talking about the role of marriage in the gay rights narrative, doing cocaine or having sex, 45 Years takes a much quieter and distanced approach. We watch the Mercers’ life, occasionally granted a window into their quivering sense of intimacy, but often from another room or through a window. Rampling’s face—the look, as it’s called—contains multitudes of doubt, pain, yearning. Haigh never forgets that the lines on their faces are a thousand words to describe their marriage.

The Criterion Collection’s release of 45 Years includes an audio commentary with Haigh and producer Tristan Goligher; a documentary with interviews with Haigh, Goligher, Rampling, Courtenay, editor Jonathan Alberts, and cinematographer Lol Crawley; and an interview with Constantine, on whose short story the film is based. With this new edition, viewers are invited to the breakdown of a marriage.

Haigh has long felt at home using a naturalist shooting style, but 45 Years marks a return to a British realist style with which he initially began his career in the nonfiction film Greek Pete, about a London-based sex worker and his group of friends and clients. Haigh sees little reason to cut unless when absolutely necessary; when Geoff initially receives the letter, Haigh aims his camera not at Geoff, but at Kate. A medium shot is enough to look at the mild confusion take over her expression, and the quiet need to wipe off any intense emotional reaction.

Haigh holds his takes for seconds at a time, reminiscent of Ken Loach and Tony Richardson. We see Kate walk outside through a window; we see Kate stand looking at nothing through a kitchen pane from outside; we watch Kate as she goes through photograph slides in the attic, the camera moving only ever so slightly. In this latter scene, movement and sound are crucial: Haigh keeps an eye on Rampling’s face and the heartbreak that begins to color it, all the while making the sound of the projector slides (that also open the film) seem like death knells.

Moviemakers would do well to explore Haigh’s long-held preoccupation with time and temporality to tap into how people, or our perception of them, can change over the course of a small frame of time: a few days, a week. Kate and Geoff sometimes lament that they never tried to save time for themselves. She wishes they had taken more pictures with one another, as if it would validate each moment.

Lessons in How to Use Music

Of the cultural totems that often define and inform the relationships and memories we create with people, Haigh recognizes music as one of the most crucial. Music didn’t play as large of a role in his previous work, (except maybe Looking?) but here, music is like another language. Not necessarily of honesty, though, as the songs he selects for the film are able to communicate illusory ideas of desire and love. Even outright lies.

Geoff and Kate reignite for what feels like, for the first time in years, a spark in their relationship, when they dance and bounce around to Lloyd Price’s version of “Stagger Lee,” Haigh’s camera in the throng with them. But when they have sex, Kate tells Geoff, “Open your eyes.” Haigh’s gorgeously textured screenplay and outstanding directing makes the relationship feel lived in, as if the two have considered themselves a partnership for over four decades. When Kate takes a moment to herself, a moment to discover who she once was independent of this relationship, it sends shock waves down the spine. She sits at the piano in the living room, a little out of tune, and plays a few notes. A few notes turns into an improvised song of melancholy and uncertainty. But it feels ineffably like Kate and like no one else.

Charlotte Rampling in 45 Years. Image courtesy of The Criterion Collection

As their relationship continues to come undone, Kate’s sense of self has been displaced, and while at the big anniversary party, she takes another moment to herself to go to the bathroom. She splashes her face with water, and looks up at herself in the mirror, as The Turtles’ “Happy Together” plays in the background. It’s a savage piece of irony, but a complex thing: It’s not that Kate and Geoff haven’t been happy together over the course of their marriage, but it’s what that happiness now means. Was it wasted if it wasn’t the first choice, if Geoff can’t help but obsess over his old lover? Did they confuse pleasant domesticity for actual happiness? Rampling’s eyes begin to sink in this scene, Haigh looking at her from a short distance.

Still, it’s the devastating final shot that cements 45 Years as a masterpiece and Andrew Haigh as an incredible director. After Geoff makes his requisite speech, their first dance begins to play, and Geoff takes Kate by the hand and leads her to the dance floor. “Smoke Gets in Your Eyes” by The Platters fills the ballroom, and the film’s subtle sadomasochism begins to recall Rainer Werner Fassbinder’s The Bitter Tears of Petra von Kant. The two dance—in front of everyone, no less. The camera slowly zooms into Kate and Geoff’s movements. But when the song ends, Kate pulls her hand from his and, arms crossed, the blue spotlight accentuates the brokenness, doubt, and the agonizing unknowing. For a slow, subtle realist drama, this scene plays like an emotional grenade, the emotions that once only simmered in Kate’s blood coming to a full boil.

In his interview, Constantine details the origins of “In Another Country,” which was a poem in its first iteration, and his fascination with the “violent confrontation of a past and present.” Given how different the story and the film are in terms of both form and perspective, it’s interesting that Criterion included the interview in the first place. But it’s an illuminating one, with Constantine discussing his approach to fiction and the role truth plays in his work. Fascinatingly, Criterion overlays sections of the text of the story over scenes from the film. By observing this juxtaposition, moviemakers can gauge what Constantine calls an “unnatural” prose and Haigh’s realist cinema in equal measure, to exploit the tension between the two in their own work.

In the making-of documentary, Haigh talks about his decision to shift the perspective of the story to Kate, as well as his decision to cast Charlotte Rampling before Tom Courtenay. As the doc goes through the pre-production process and principal photography, Haigh and Goligher talk about how Charlotte and Tom established an intimate dynamic with one another and figured out how to shoot the film as chronologically as possible. Again, the director’s strong command of temporality is showcased, here: a reminder to independents of the naturalistic special effect that the depiction of elapsed time can create within your feature’s narrative.

In spite of Weekend having been shot digitally, Crawley discusses cajoling Haigh to shoot on film and in low light situations. Crawley’s discussion is instructive for indie DPs seeking to imbue their imagery and characters’ faces with a worn-in, weathered look, as he says he wanted the film to “look like a photograph,” aged and an attempt to capture an elusive moment in the portrait of a marriage.

“[45 Years] is a haunting, a reminiscence of things coming back,” Rampling says of its ghost story elements, with other members of the cast and crew echoing that sentiment. If Looking is about the possibility of a life, then 45 Years can be seen as trying to revive a life lost from the dead.

As Andrew Haigh continues to build his filmography, realist moviemakers ought to take cues from his interest in the ways in which the quotidian can have cataclysmic effects on our lives—a defining trait that makes him one of the most fascinating queer artists of our time. In Looking: The Movie, he took the debate of what it means to be queer in this age and turned it into a dialectic, and the complaints about the show—which he often directed, wrote and executive produced—being boring came rolling in. But there was a failure on the part of audiences to recognize how the smallest, dullest, most mundane moments of Haigh’s work often transformed his characters’ lives. The same can be said for Weekend, where a hookup forces two people to ask how they conceive of themselves. In 45 Years, each shot that fixates its attention on such small moments is an indication of casual domesticity, as well as the slow undoing of a life. MM