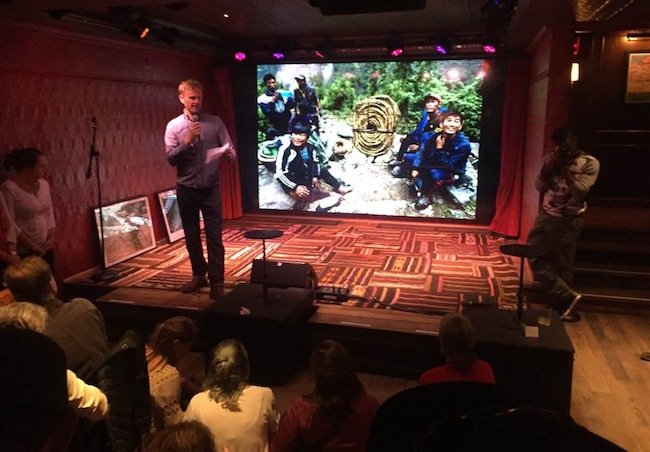 I felt a bit jostled as I disembarked from the puddle-jumper out of Denver.

The ride over the Rockies had been a bit bumpy, but it did not diminish my excitement to be in the craggy nucleus of Colorado for the Crested Butte Film Festival. Surrounded by mountains that push up through the ground like gargantuan knuckles dusted in green and gold, Crested Butte is a quiet mining town turn ski haven that has been secretly brewing up one of the best small film festivals in the United States.

My last experience at a secluded film festival like this found me having a rip-roaring time in Serbia with Emir Kusturica and a legion of hard-partying international cinephiles. Kustendorf is still one of my all-time favorite festivals, so Crested Butte would have to bring it’s A-game to compete with that mountaintop experience.

Founded by the husband/wife team of Michael and Jennifer Brody in 2010, the Crested Butte Film Festival has almost anything a filmmaker could want. On top of the scenic beauty that surrounds it, the festival is a creative vortex of top-notch programming and community building opportunities that provide excellent opportunities to see new films and network with your peers.

“I have a really interesting kinship with the filmmakers here than I have at any other festival,” said Alexander Hancock, the director of the short Yellow. “It’s an amazing honor to be here.”

The Majestic Theatre, one of the primary screening venues at CBFF. Photograph by Greg Hamilton

Following a quick visit to festival HQ to receive my gift bag (replete with locally made snacks, beer and bottled tea!) I jumped the free in-town ski bus to check my hotel digs, only to end up slightly lost up amongst the condos and lodges that overlook town. In what would be the first of several experiences in local hospitality, I was rescued by CBFF co-founder Michael Brody, who buzzed up the hill to make sure I got where I was going.

After settling in, I hustled back down for the opening night filmmaker party at Montoya—a local rum-distillery and cocktail lounge. This was where I learned about the power of alcohol at high altitude. Three specially crafted martinis later, I was experiencing my own Rocky Mountain High and soon found myself scuttling down Elk Avenue toward the Center for the Performing Arts to catch the opening night screening. Before the show, I sat down next to a local who told me of how CBFF had literally changed his worldview with its eye toward socially conscious cinema. The opening film was a perfect example, featuring Wasted, a thoughtful documentary investigation into international food waste narrated by renowned chef Anthony Bourdain. After that, I was sincerely spent, but impressed and ready for more over the weekend.

Day two kept the momentum going with two blocks of excellent documentary shorts, a catered filmmaker luncheon and a couple parties that set the bar for good times. One of the key reasons CBFF is so special is that everything is within walking or biking distance, giving filmmakers an opportunity to interact and network organically. In the short time it takes to move between venues, you’re likely to bump into new friends at every turn.

Case in point: I had just finished up watching the World Premiere of Quaff Kings, a hilarious documentary about a wildly creative and competitive drinking game. I was walking home afterwards, when one of the audience members I’d been talking with rolled by on his bike and invited me to his house for a party. Five minutes later, I was standing in his kitchen, munching on buffalo tacos, talking movies and sipping a brew. Now that’s local hospitality!

But wait, there’s more. Following that party, I ended up at a local bar that was hosting and impromptu session of the game featured in Quaff Kings. A portable bar was set up outside and a crowd had assembled as members of Team Quaffstafari pitching beers to each other in a wild ballet of sliding, catching and drinking. At some point, the game opened up to the amateurs and I found myself slinging beers across the bar to CBFF Co-founder Michael Brody. Now that’s about as down-home as a film festival can get! The capper to the evening was a late-night screening of the new urban horror film The Transfiguration, an entertaining and bloody take on vampirism that was nominated for two awards at Cannes.

Day three started hard. The revels of the night previous and the thin air had taken their toll. Thankfully, a local gas station/convenience store (Gas Cafe) had a short-order grill inside and served amazing breakfast sandwiches to helped soak up any iniquities. After a quick walk into town, I dove into the schedule and continued to be impressed by the quality of the selections. CBFF’s overall programming is an exceptional mix of personal films that fold together some of the best narrative and documentary selections on the festival circuit. From the feature documentaries on tap, the rousing Whose Streets? presented a compelling window into the Black Lives Matter movement and its reaction in Ferguson, MO following the death Michael Brown. On the flip side, David Byers’ No Man’s Land smartly embedded itself with the armed right-wing occupiers of the Malheur National Wildlife Refuge in Oregon, letting the militants speak for themselves. When the festival awards were presented later that evening, both of these films came away winners with Whose Streets taking Best Documentary, and No Man’s Land reeling in a Special Jury Prize. Also of note was the Documentary Short winner Woody’s Order, which eloquently captures a beautiful relationship between and actress/director Ann Talman and her brother Woody who has cerebral palsy.

Day four delivered even more cinematic surprises throughout the day. One of the real gems at CBFF are the keenly curated shorts programs which reflect an array of themes (“Hell is Other People, America: Here and Now”) and blend narrative and documentary subject matter with aplomb. Highlights from the shorts included Laura Seay’s deeply personal and darkly poetic narrative Speak, Alexander Hankoff’s unholy racing thriller Yellow and Amanda Zackem’s riveting examination of U.S. culture in American Psychosis. One of the Filmmaker Talk highlights (which included discussions on making short films and working with documentary subjects) was a panel with A24 Marketing and Distribution Specialist David Laub, who discussed the some of the finer points of how he discovered new works for A24, such as Moonlight and A Ghost Story. After his panel, Laub summed up his feelings toward his CBFF experience. “They clearly have a lot of enthusiasm for what they are doing here and its run very nicely. They are passionate and involved, and I kinda love that.”

So do I, Crested Butte. You done me right. MM