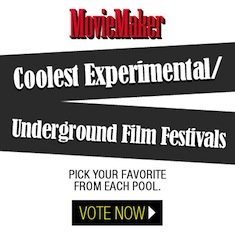 For the past few months, MovieMaker has been running the “Top 25 Coolest Film Festivals” contest, asking our readers to nominate and vote for the festivals they think are the coolest in the world. Vote for the coolest Experimental/Underground fests below!

This year, we divided the list into categories, to recognize the ever-expanding variety of festivals in today’s circuit. So while we’ll still be ranking the “25 Coolest Festivals” in the general category, we’ll also be ranking the top five festivals in 10 other categories, ranging from documentary to shorts. Now tiny genre fests and larger, more well-funded organizations alike can compete on their own terms.

Here’s how it works: Vote for the best of the best of the Experimental/Underground film festivals (that also happen to be the coolest of cool) in each of five pools. The cool fest with the most votes in each pool will win a spot on our “Top 5 Coolest Experimental/Underground Film Festivals” list. All the festivals that make our final list will appear in print in the Fall issue of MovieMaker. This round will end Wednesday, September 4 at 4pm, so make sure to get your vote in before then!

How do you ensure that your favorite festival makes the top 5? Tell your family, friends, co-workers, anyone and everyone to vote, vote, vote!

To browse all 20 of this week’s Experimental/Underground film festivals and vote, click on the arrows to the right or left of the voting bar (you’ll need to hover your cursor over the edge of the bar until the translucent arrows appear).

For more information on each fest (including MovieMaker fun facts), click on its picture, or the magnifying glass icon. To visit the festival websites, click the shopping cart icon.
———-

Voting for the Experimental/Underground category has concluded. Thank you for participating in the last Coolest Festival contest!

MovieMaker will be releasing the official list of Coolest Festivals as the fall issue hits stands October 21. We know it’s a long time to wait, but as the old saying goes, patience is a virtue. Below is a list of the festivals that competed in the Experimental/Underground category.