Coloring Outside the Lines: DP Benoît Debie Shakes it Up with Gaspar Noé, Harmony Korine, and Jacques Audiard 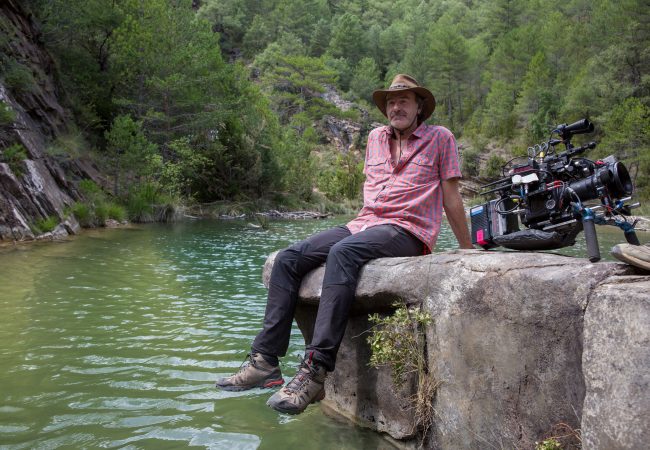 As a cinematographer the first thing you need to do is understand exactly what your director wants from the script.

You need to understand the mood of the movie, which is what you’ll be translating through your lighting and camera moves. Read the script and absorb what your director believes is the feeling of the film. Only then can you begin to incorporate your own style.

What I look forward to most as a DP is observing the space in which I’m going to shoot. As soon as you get to a new location or set, your first step is a simple one—just look at it. Is there an opening to set up beautiful lighting somewhere? Should you not light it, and just use the place as it is? These are the things you’re looking for—what already exists. Often what you have in front of you is even better than what you can do yourself.

About a week before director Gaspar Noé and I began shooting our latest film, Climax—a horror musical about a crew of dancers who stumble into a bad trip after accidentally drinking LSD-laced sangria— we attempted to pre-light the old building in which we shot the majority of the film. The space was totally empty, with no natural light sources and faulty electricity. After working with an electrician to get us operational, we realized we had to adapt the lighting, because our shooting scheme required that we fit everything in the space—actors, set pieces, props, etc.—inside of each frame. Gaspar wants his DP to be able to shoot 360 degrees—to essentially be everywhere at once.

Nailing this effect doesn’t allow for much improvisational lighting; it’s more particular than that. So, much like we did when using practical lamps to shoot Irreversible, we needed to light the scenes from within the frame, as opposed to your typical equipment that remains outside of the frame on C-stands. I suggested to Gaspar, “Maybe we can use something new.” We’d use specialized tube-shaped LED lights whose colors change from green to red to blue or purple, during or in between takes—all controlled via iPad. (I’d first used them to shoot Harmony Korine’s new comedy feature, The Beach Bum.)

The lights achieved our aesthetic goals while saving time during our mere two-week shoot, making each iPad-controlled light change more seamless. It was all very experimental; although the iPad controls worked well, they were touch-and-go and afforded us limited options whenever we wanted to move things around in a scene spontaneously. Plus, the newness of the equipment made it impossible to rent, and forced us to buy it all outright. But it did do the trick.

Gaspar and I have worked together on four movies, and we have a unique way of shooting. Gaspar likes to shoot one long take per day, and these long takes can be anywhere from five to 15 minutes, so he takes the time we need to shoot them. That’s what I like about working with him—we’ll take our time, set up the choreography of our shots and our lighting until he feels it’s all ready to shoot.

Usually, shooting a movie isn’t like that. You’ll generally have different set-ups to do every day and about 30 to 60 minutes to shoot a sequence or take. But Gaspar wants to see the visuals first, before he works with the actors.

When we’re working together on the set, we’ll check the design and the color of a room, and if he feels—like he felt when we made Irreversible or Enter the Void—that he has to paint a wall yellow, green, or red, he’ll change our shooting days to adjust the color of the wall. That’s a huge production scheduling change, but he did it because he understood that the color of that wall is the color of the film. Working with Harmony is exactly the same: I have to work with him and the production designer on the colors of every room, and of the film as a whole. 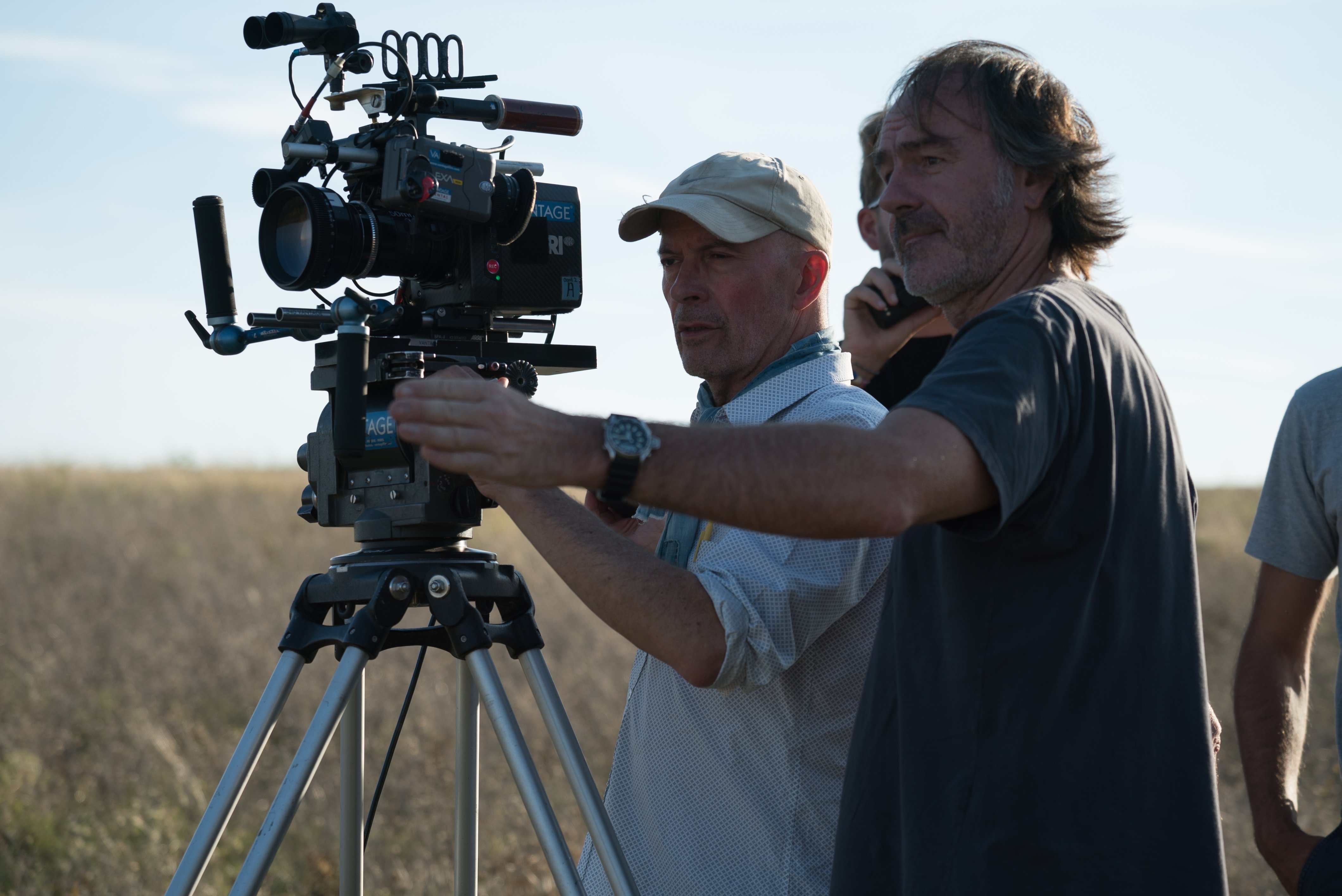 Working with The Sisters Brothers writer-director Jacques Audiard taught Debie how to let the actors lead the camera, he says. Image courtesy of Annapurna Pictures

In fact, my working relationships with Gaspar and Harmony have shown me that the most important working relationship a DP has is with the production designer. If your production designer can deliver a set with gorgeous walls that are shiny or matte and in any color scheme, it’s as if the work has already been done for you when it’s time to set up your lighting. Shooting Harmony’s Spring Breakers in Miami, we had plenty of light to work with—so much so that we found ourselves having to shut out some lighting to keep the visuals balanced. When I worked with Jacques Audiard on his western feature The Sisters Brothers, we shot in the middle of the forest at night, and the utter blackness forced us to create more of our own light. Think of the production design of the film and your lighting as complimentary opposites.

Never try to push the director to do something he or she doesn’t want to do. Working with Gaspar, I’ve learned that he won’t tell you exactly what he wants during the shoot, but he wants you to do something. If for any reason he doesn’t like it, he’ll tell you, “No, maybe don’t go for this color, use this other color.” If I go for blue and he tells me, “Let’s try green,” I try the green. Some directors won’t ask you anything, so you can do whatever you want. But even then, always feel out what he or she wants, likes, and doesn’t like first.

Working with Jacques, I found that the most important thing for him is the actors, not technique. Gaspar loves camerawork, so he can stand around for eight hours playing with the lighting and composing a frame. Jacques would rather spend those eight hours focusing on performances, and whatever his camera is doing is only there to support the story. Making The Sisters Brothers was the first time I’ve worked in that way—leaving the actors alone, essentially being there while not being there. You need to be open to many ways to shoot a movie.

To shoot Climax, Debie’s “360 Degree” camerawork moved to the beat set by writer-director Gaspar Noé. Image courtesy of A24

Meeting Harmony for the first time before making Spring Breakers, he told me, “I want you to be the star of the movie.” A director never says that to a DP. He continued: “Try whatever you want. Experiment with color, move the camera. Try everything.” So I did. Sometimes when you shoot a movie, there are rules about colors you really shouldn’t use. If you shoot a standard feature you don’t go for purple or green; you stick to a more neutral palette. But Harmony was pushing me to do the reverse. By the end of the shoot I started using some colors I’d never used. During prep, I took pictures of areas of Florida at nighttime, and once they were printed I could begin to imagine the film. I decided to set the goal of changing from one color to the next for every sequence, moving from green, to blue, to yellow, and so on, building the colored lighting of the film in layers.

Last winter, when Harmony and I shot The Beach Bum, he told me, “Go even further than Spring Breakers.” The Beach Bum doesn’t use any of the same colors, and shooting on film helped with the textures and details of every sunset or shot of the horizon, which looks beautiful… and even a little bit crazy. Most directors would say it’s not the best idea to shoot an entire sequence over again after you’ve gotten the right takes, but for The Beach Bum, Harmony wanted to shoot the same sequence twice—first in one location, which is shown at the beginning of the film, and then in another which is shown at the end. Having both versions of the same scene opposite one another allows you to experience two distinct atmospheres.

A DP should also be able to imagine ways in which imagery can be shot without lighting equipment. The opening scene of The Sisters Brothers—during which Charlie (Joaquin Phoenix) and Eli Sisters (John C. Reilly) are barely visible against a dark landscape until the crossfire of their gunfight illuminates them in short bursts—was my best for this reason. We shot it once, at dusk, when the sun was low and just enough light had exposed certain areas of the landscape. Most of the shots were fixed, and after we completed them, we did some separate shots that focused solely on the gunfire. Later, my shots of the sky, the landscape, and the gunfire were mixed together in post-production to shape the sequence. Composing shots with different exposures in this way allows you to juxtapose distinct visual layers against one another and, as was the case here, to use darkness to your advantage as much as you would light.

If Harmony and I shoot a scene all day long and it ends up not working, that could of course present problems for the production, since it’s likely that we won’t have it in our budget to pay for an extra day. So, whenever we’re watching the dailies and decide that something doesn’t feel right, he’ll find a solution to re-shoot the material at no cost. This could mean creating a new sequence by combining existing material with a sequence that’s scheduled to shoot the following day. The lesson: Practical fixes beget creative freedom, even when faced with tight budgetary constraints.

Push as hard as you can on every project to shoot on film. Many producers and DPs will tell you, “No, shooting digitally is the same thing,” but it’s not. How can anyone say that? You cannot get on digital what you can on film: both in terms of contrasts and color, including colors you can find on the black and white spectrums.

I had just five days to complete the color timing of The Beach Bum, and by the end of that time it was almost ready for a print. When you shoot digitally, like I did with The Sisters Brothers, that process takes about three weeks to a month, as it entails multiple shots that need to be color-corrected together. Climax was the exception to this rule; it only took a few days despite being digital because of Gaspar’s insistence on the film being a collection of long takes. When the colors of your film are already embedded into the set of the film itself, as in the case of Climax, there’s little need to touch up the image or do any grading in post.

Above all, a cinematographer should always want to do something different. So, just play: Experiment with new techniques, lenses, cameras, or even film stock. You won’t know what you like and don’t like, what works and doesn’t work, until you try. MM

Climax opens in theaters March 1, courtesy of A24. The Beach Bum opens March 22, 2019, courtesy of NEON. This article appears in MovieMaker’s 2019 Complete Guide to Making Movies.

Inside the Creative Process: Karyn Kusama Walks Through Five Phases of Production, From Screenwriting to Distribution
Pictures Worth a Thousand Jobs: Netflix’s Blockbuster Deal with ABQ Studios is Poised to Bring Thousands of Jobs to New Mexico