Color Commentary: A Seasoned Colorist Breaks Down the Process, and How It Will Enhance Your Movie 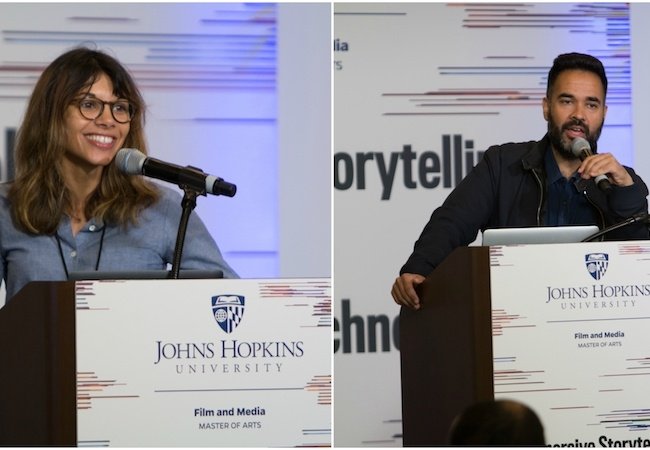 Your colorist is the most elusive-yet integral member of your post-production team.

Whether you’re aware of it or not, color’s unique essence directly influences our emotional and psychological states. From production design to lighting, moviemakers use color to forge deeper connections with their audience. Directors and cinematographers construct a world through performance and composition, and their color choices express their films’ emotion and tone. It’s the knowledge of color theory and the technical expertise of the colorist, however, that elevates cinema’s palette to a level that unearths the core of cinematic stories.

Before the digital age, color timers analyzed the film negative on a machine such as the Hazeltine and adjusted the amounts of red, green, and blue light needed to print each scene. Once these printer lights were set, the lab would strike a print and the timer would watch the film again, making notes on what needed to be adjusted for the next round of prints. This would be done multiple times, especially as the film advanced toward picture lock and mastering. As limited as this method may seem, it is an involved process that requires a specialized skill set. Color timers needed to have the eye for aesthetics and the technical knowhow to translate the film negative into a vibrant print.

This same skillfulness applies to modern-day colorists, though now we have a larger, more complex toolkit to work with. But no matter the advances in technology, the rules of color are fixed and their interactions are endlessly fascinating. Tinting and toning, the shifting intensity of hues, and the awareness of how various combinations make a viewer feel are all important subjects a colorist must understand and master. By combining a knowledge of color theory and aesthetics with color science and new technology, colorists can ensure that every frame looks its best.

While usually hired during the post-production process, colorists can also begin collaborating with the director and DP during pre-production and camera tests. By working together closely early on, DPs and colorists can create a workflow that will retain the integrity of the image from production to post. Camera models like the RED DRAGON, Alexa Mini, Sony FS7 and countless others have the capability to record images in RAW or LOG format, which mimics the characteristics of a film negative. This allows the DP to capture a wide and dynamic range, giving the colorist more latitude to work with. It’s important to keep in mind that a LOG image will appear milky and desaturated if the proper LUT, or look-up table, isn’t applied. A LUT is a mathematical specification that takes the RGB values of a flat LOG image and transforms them into the proper color space for specific displays. Although camera manufacturers provide LUTs for various models and color spaces, a colorist can create a custom LUT tailored to both the camera model and the stylistic choices the DP makes on set. This custom LUT plays back during production through on-set monitors and is applied to editorial proxies for post. This process helps materialize the shared vision of the DP and director and creates the basis for further experimentation on set.

The lush palette of If Beale Street Could Talk was so important to director Barry Jenkins and DP James Laxton that colorist Alex Bickel came aboard in pre-production. Courtesy of Annapurna Pictures

By involving the colorist early on, the production crew can anticipate what is possible in post, like the exposure range needed for a day-for-night look, for example. By establishing the look of the film early on, colorists can focus their time during post  adjusting problem areas, such as masking out a crew member from a frame or shifting a hue to more closely match the director’s references. When working on a film that requires heavy VFX work, the colorist will be in close contact with the VFX artist, swapping files back and forth. When the look is established and achieved on set, the colorist will have more time to finesse VFX shots to match the rest of the scene. Involving the colorist during pre-production and production saves time and heavy lifting, and enables the director and DP to be certain of the look they wish to achieve while shooting.

Sometimes a project’s budget or schedule won’t allow for the colorist to be involved prior to post, which is routinely the case in independent moviemaking. Once the project is picture-locked, the colorist will step in and work their magic. Along with camera and editorial specs, a colorist will also request a collection of reference images that help translate the vision of the director and DP. These can range from examples of films, paintings, and photographs to specific words or phrases. A colorist’s job is to take these references and interpret them using their knowledge of color theory and color science. Sometimes a colorist may find that a reference reflects an emotion rather than a stylistic choice. When this is the case, the colorist is able to create and present various “looks,” giving the director and DP choices that may appear different but are all grounded in the emotional response they hope to achieve. This is one of the most crucial responsibilities of a colorist and what makes the process one of trust, respect, and collaboration.

During production, circumstances may lead to lighting mishaps or color temperature imbalances, but colorists have the ability to smooth out these imbalances during post. For example, if a camera’s white balance was improperly set to tungsten for a daylight scene, it’s a simple fix in the color session. The tungsten setting will give the image an orange tint. Color theory teaches us that orange and blue are complementary colors and, when mixed (paint-wise), they create a neutral gray. Colorists know that shifting the white point toward blue for a daylight image that was set to tungsten will help neutralize the image and allow for a better starting point.

Another example involves movement between areas that are lit differently, like following a subject from indoors to outdoors, or from a brightly lit area to a shaded location. During the color process, exposure shifts can be keyframed by marking specific moments on the shot where the shift happens. Colorists set an adjustment for each marker to help smooth the intensity of the exposure shift. This keeps the viewer engaged in the story and not distracted by the darkening or brightening of the image.

Just as a good DP should know how to create a lighting setup that allows for varied skin tones to be captured equally, a good colorist must also work within a spectrum of skin tones. Some projects may not allow for time to properly light the subject, so a colorist can use power windows and keying to isolate the subject’s skin tone and make the necessary adjustments. For example, the spill of fluorescent lights can make a person’s skin look sallow and green, but in the color process the hue of skin tone can be shifted to bring warmth and life back to the subject. A colorist can also assess clipped highlights and crushed blacks to see if any detail can be retrieved. When highlight areas such as a bright afternoon sky are clipped, there is no detail present in those areas of an image. Blacks may be crushed in locations like a dark, shadowy alleyway, limiting the detail in those areas of the image. If the project was shot LOG, the chance of restoring detail to these areas is greater due to the high dynamic range of the original image file. Even if the detail is unable to be restored, a colorist can lessen the intensity of clipped highlights and crushed blacks through soft clipping. All of these little tricks are specific to a colorist’s skillset, making them the go-to consultant for a moviemaker’s visual problems.

Colorist Caitlin Díaz worked on the restoration of Belladonna of Sadness, the 1973 Japanese gem whose visuals consist mostly of still paintings. Courtesy of Arbelos Films and Cinelicious Pics

Technological advances in the post-production process may seem to allow for more on-set mishaps to be corrected, but there are limits to the magic colorists can perform to a problematic image. Sometimes the image is just too underexposed to bring back detail without introducing digital artifacts and noise in the blacks. And although colorists can shift the white point of an image, improper color temperature settings on some camera models will not allow for the full color gamut to be restored in post. A colorist knows how much they can push an image before it begins to break apart, and they will let moviemakers know when they’ve reached their limit. So even with all these tools and the artistic and technical know-how, a moviemaker should never rely on a colorist to fix an issue that can be easily resolved during production.

Alongside the director and DP, a colorist is the last person who touches the film with their technical expertise and creativity. They understand how certain hues will read on screen and how those hues will make viewers feel. Whether it’s a simple adjustment or a full-on stylistic choice, the colorist’s work is to fine-tune and reinforce the moviemaker’s message. The relationship between a colorist, DP, and director truly represents the collaborative effort that moviemaking requires, and with proper planning it should be a creative and exciting experience for all.

The process of adjusting the white point and removing unnatural hues so an image appears natural to the environment you are capturing.

A tool that masks an area of an image to isolate an adjustment. In digital color correction, power windows come in many shapes and can be tracked against moving parts of an image.

A format used in digital cameras that allow the sensor to capture the highest dynamic range of an image. It appears flat and desaturated when viewed on a monitor.

A Look-Up Table is a mathematical specification that takes the RGB values of a flat LOG image and transforms them into the proper color space for specific displays.

Pixelation or banding resulting from pushing an image past its range. A common occurrence when trying to brighten an underexposed image: When there isn’t any detail present in an area of an image, pushing the brightness levels will begin to break the image apart and create artifacts.

When the highlights of an image are overexposed and contain no information or detail.

When the shadows of an image are underexposed and contain no information or detail.

A tool in color correction that reduces the intensity of the clipped or crushed areas of an image. MM

Breaking and Entering, Part One: How To Shoot Down Self-Doubt and Pay the Rent While Making It In the Film Industry
How They Did It: Asghar Farhadi Lived in the Country of His Spanish-Speaking Stars to Write and Direct Everybody Knows