Christian Bale is doing something he rarely does: talking about his personal life.

“I don’t like to bring my own life into any portrayals. However, you just can’t avoid it at times,” he tells MovieMaker of his role as intrepid detective Augustus Landor in Scott Cooper’s new Netflix horror-mystery movie The Pale Blue Eye.

Harry Melling stars opposite Bale as a young, rather cheerful Edgar Allan Poe, who helps Landor investigate a murder at West Point in 1830. It’s a fictional imagining of Poe’s life, years before he became a master of horror.

Bale’s Landor isn’t just a detective — he’s also a devoted father whose relationship with his daughter is at the heart of the movie. The fact that Bale, himself a father of two, has some emotional overlap with his character is not lost on him.

“I certainly find as an audience member watching The Pale Blue Eye, that brings up an enormous well of emotion. It’s obviously a whodunnit. It’s also, with Poe and Landor, kind of a father-son story. But clearly, very much a love story of a father’s love for his daughter,” Bale says. “But any father, I think, will truly understand and perhaps be surprised at how they feel in watching the film.”

This is Christian Bale and Scott Cooper’s third film together, following 2013’s Out of the Furnace and 2017’s Hostiles. The Pale Blue Eye is personal for both of them.

“We spend a lot of time together off the set. He’s not only my closest collaborator, but one of my closest pals,” Cooper says of Bale. “He’s a devoted family man.”

Cooper knew this about Bale when they started tossing around ideas for The Pale Blue Eye over a decade ago. Cooper’s father first introduced him to the 2003 Louis Bayard novel The Pale Blue Eye, from which Cooper adapted the film.

“Just after I finished my first film, Crazy Heart, my father introduced this novel to me, because, much like Edgar Allan Poe, I spent my formative years in Virginia. My father taught English and literature. He thought that I would love a story in which Edgar Allan Poe was a young man at the center of a detective story,” Cooper says.

Cooper and Bale were patient as they developed the film.

“There were other projects we were going to do first, and I think he also kind of liked the idea of me aging somewhat before trying to play Landor,” says Bale.

“Because I know Christian intimately, I write for certain aspects that I know he will draw upon,” Cooper explains. “He’s a very attentive actor. He brings a lot of his life experience to all of his parts. It just so happens that the parts that he plays in my films require a different muscle, and he draws on familial experience — just personal experience. That’s the great thing about Christian, is that he’s bringing all of that and putting it into his soup, which he then offers up to the director and the rest of the cast.” 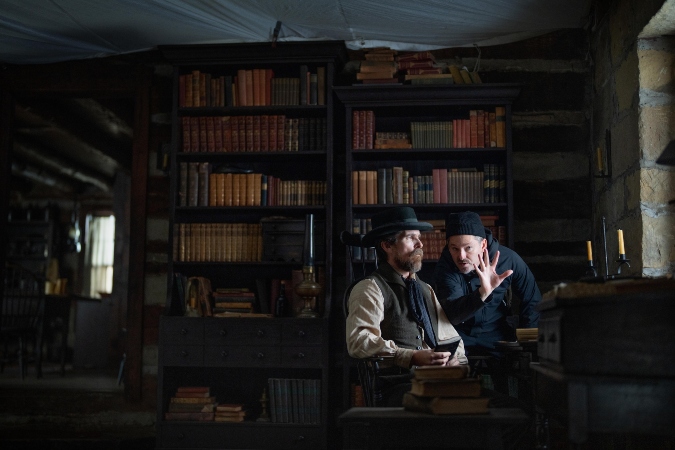 In addition to Bale and Melling, the cast of The Pale Blue Eye includes Lucy Boynton as Lea Marquis, the object of Poe’s affection, Gillian Anderson as Lea’s mother, Harry Lawtey as her brother, and Toby Jones as her father. Hadley Robinson plays Landor’s daughter. The film also features appearances by Melling’s Harry Potter castmate, Timothy Spall, as well as another one of Cooper’s longtime friends, legendary actor Robert Duvall, who also starred in Cooper’s Crazy Heart.

Working with Melling, in particular, was a very special experience for Bale, who says he knew immediately after seeing his audition tape that he was right for the role of Poe.

“I’ve always been absolutely terrible at auditions. I never understood how I managed to get a part. But I saw Harry’s tape, and he was managing to tap into something just incredibly personal, incredibly interesting — very hypnotizing,” Christian Bale says.

Cooper had the same response.

“I’ve only seen a little bit of Harry’s work, but I was struck by his performance in The Ballad of Buster Scruggs, and I knew at that moment that he would be a remarkable Poe, not only because he had such a striking look, but because he had the ability to handle the language in this film. This is written obviously for 1830 — the language is more florid than I usually write. It’s quite lyrical, and he and all of the other Brits in the cast really handled it beautifully,” Cooper says. “He also has a great warmth and he’s witty, Harry. He has a playfulness, but he can also be quite vulnerable, which is what I wanted for Poe.”

“I knew the sort of mystique around him — I knew the strange death occurrences, The Raven, The Pit and the Pendulum, various films that I’ve watched growing up. I wasn’t so familiar with the detective stories — The Murders in the Rue Morgue and The Purloined Letter,” he says.

Bale noted that the detective character in the latter story had the middle name Auguste, which he assumes is what inspired Bayard to name his character Augustus Landor.

“I just love the notion of creating an origin story of this incredible giant of American literature, who had as fascinating a life as any of his books and a just ridiculously tragic and mysterious death as well. It almost feels like performance art,” Bale says.

It was fun for him to imagine himself as a contemporary, and even a drinking buddy, of Poe’s — “to play a character who apparently was an enormous influence, very much a father figure upon him, and whose experiences together led Poe to become the godfather of detective fiction and the macabre,” Bale says.

“Also a very heavy drinker, which Landor is, too. They both get whiskey bent and hellbound on numerous occasions.”

Though he’s an Oscar winner for 2010’s The Fighter and known for iconic roles in films from American Psycho to Vice to The Dark Knight trilogy, Bale had only produced two other films prior to The Pale Blue Eye. The first was the 2005 David Ayer crime drama Harsh Times, and the second was last year’s Amsterdam, his third film with The Fighter director David O. Russell.

Why did he choose to produce The Pale Blue Eye?

“It really generated from my relationship with Scott, and the fact that I had really been the first person he shared the script with, and the understanding that directors have many plates to spin, have many hurdles,” Bale says.

He enjoyed being Cooper’s “right-hand man who understood his vision.”

“He’s very generous and enjoys that partnership, and so it seemed appropriate with this one to produce in a creative fashion. It’s not something that I plan on doing consistently — only when it feels good,” Bale says. 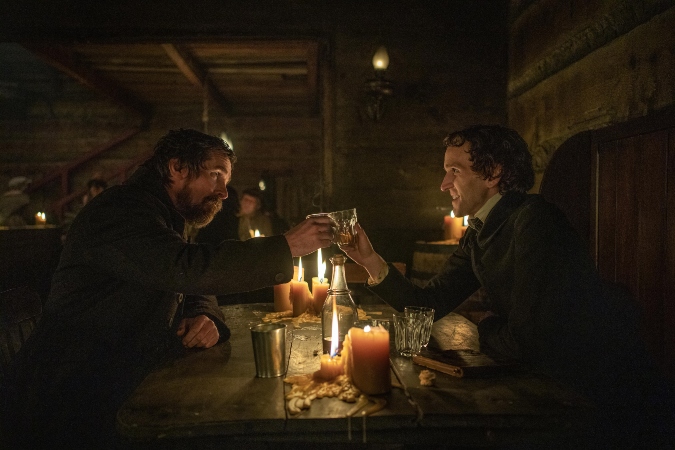 Talking movies is just another part of their friendship.

“Because we collaborate so closely, whether it’s the screenplay or something else that I’ve written or other cuts of movies that I’ve directed that he hasn’t been in, he always sees my films, and he has a very strong opinion about my other pieces of work,” Cooper says. “He always feels that, if he can be additive — which is helping the film reach the widest audience and making certain that the director’s vision is supported — then he’ll produce a film. And I think he’s starting to do that more.”

Since he’s been an actor since childhood, Bale has a lot of insights to lend, both in front of and behind the camera.

“The first one that I think he really helped produce, and should have taken a producing credit on, was Hostiles, and of course, this is our second after that. So I’m grateful that he did,” Cooper says. “His experiences are valuable.”

“I think Christian, in my generation, is the finest screen actor working,” he says. “He has so much range. He has the ability to play so many different colors, not only throughout the film, but even throughout one particular scene.

“Though he’s the lead in my films, he always acts as though he’s a supporting character, a supporting actor, and he’s always there to serve the story and to serve not only his character, but all the other characters. And for someone who is as big a star is Christian, that’s rare.”

This story also appears in the Winter 2023 print issue of MovieMaker Magazine.