400,000 Children Are Starving in Yemen. The People to Blame Want to Hide It From You 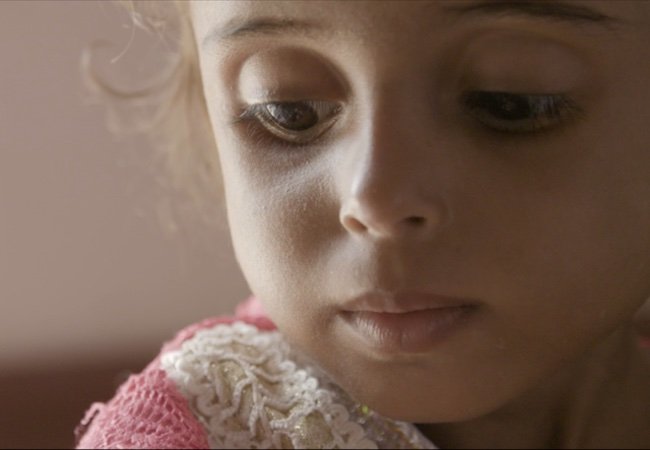 When we first meet 6-year-old Abeer Otham Thaneb, one of the two main children portrayed in the new documentary Hunger Ward, she weighs 15 pounds.
Abeer and another girl, Omeima Essa Salem Abdullah, are the film’s faces of the humanitarian crisis in Yemen, where more than 2 million children suffer from acute malnutrition — and the United Nations estimates 400,000 may die if untreated.
The film, by Skye Fitzgerald, doesn’t spend much time on the reasons why, since no justification is possible. Instead, Hunger Ward shows us the daily struggles of two heroic women, Dr. Aida Hussein Alsadeeq and nurse Mekkia Mahdi, who labor every day to save famished children the world has forgotten.
Or forgotten might be the wrong word. If you haven’t heard much about the crisis in Yemen, that’s no accident, says Fitzgerald.
“There’s an active attempt to prevent us in the West from learning about this conflict and our own complicity in the conflict,” Fitzgerald says in the latest MovieMaker podcast, which you can hear above.
“One of the ways that that’s done is the coalition that blocks food and diesel from entering the country also prevents journalists and filmmakers from getting in to tell the story. But also local journalists and filmmakers are prevented from getting these stories out, and they’re actively disappeared.”

The coalition is led by Saudi Arabia — and backed by the United States — and has led a brutal bombing campaign and a naval blockade that hurt innocent children the most, Fitzgerald says.
His goal is to get the word out, so people can help. You can go to HungerWard.org to give directly to the two hunger wards seen in the film. Fitzgerald says $50 can support one of the severely malnourished children for a month. Registered 501(c)3 nonprofit Globio ensures each contribution goes toward the work in the film.
“One of the dangers in this geopolitical crisis — and any geopolitical crisis — is the concept of compassion fatigue, right? It’s a real thing,” says Fitzgerald. “I was very intentional about really not trying to tell a broad spectrum story of the conflict and fully contextualize it, because I think it falls into that sand trap where people are going to be numbed by the numbers. And I felt like the way through that…  was to focus on the individual, to focus on the individual efforts of two health care workers who had dedicated their lives to saving this child, Abeer, and this child, Omeima.”
The Portland, Oregon-based Fitzgerald and his crew ran into significant resistance — including being detained by a local warlord in Yemen — but Fitzgerald wants the focus to be on the crisis and the medical professionals trying to save as many young lives as they can.
“Our trials and travails were nothing compared to what they face on a daily basis,” he says.
Hunger Ward, which is nominated for an Oscar for Best Documentary Short Subject, can be streamed on Paramount+ or for free on Pluto TV. You can also watch it this week, along with all the docs nominated in the category, through the Montclair Film Festival.
Main image, above: Abeer Otham Thaneb in Hunger Ward, courtesy of MTV Documentary Films.