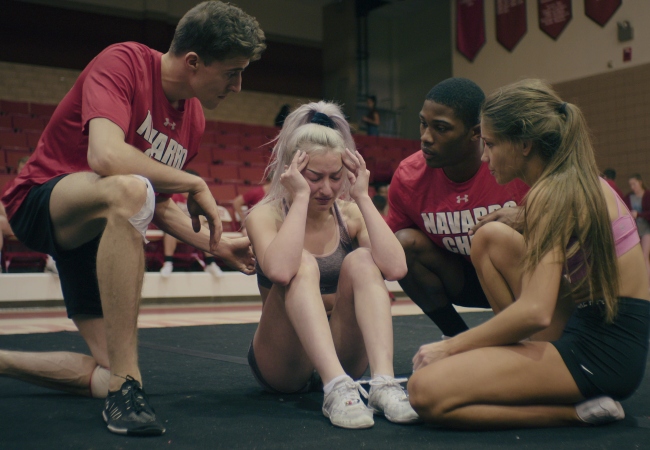 “Navarro was a little bit different from when we’d left it. They were famous,” director Greg Whiteley told MovieMaker of returning to Navarro College in Corsicana, Texas to film Season 2 of his hit Netflix docuseries, Cheer. “But as far as our approach as filmmakers, it didn’t change at all.”

Of course, something has changed dramatically since last season. Or, rather, someone. Jerry Harris, the fan-favorite Navarro cheerleader from season one, was arrested in Sept. 2020 and charged with seven counts related to child pornography and soliciting sex from minors, including four counts of sexual exploitation of children, one count of receiving and attempting to receive child pornography, one count of traveling with the attempt to engage in sexual conduct with a minor and one count of enticement, according to The New York Times.

Harris pleaded not guilty to the charges at his Dec. 2020 arraignment and is currently in custody awaiting trial. However, the Times also reported that Harris told FBI officials that he had exchanged sexually explicit photos with 10-15 people he knew were minors and that he had sex with a 15-year-old at a cheer competition in 2019.

Whiteley says the decision to address Harris’ charges in the first episode of the new season, and then again at greater length in Episode 5, was a no-brainer.

“It’s never going to be easy. This is a very difficult thing that happened,” Whiteley said. “And you’ve now got to bring all your tools to bear to chronicle it with with a cold eye and a warm heart.”

Also Read: Inside the Visual Effects of Succession Season 3 With Phosphene’s Aaron Raff

Two of the minors who accused Harris of soliciting sexual photos and video from them are a pair of twin boys from the Texas cheer community, Charlie and Sam, whose mother, Kristen was the first to blow the whistle on Harris when she discovered an explicit snap chat video from Harris on her son’s phone. She, Charlie, and Sam are interviewed at length in the Season 2 episode titled “Jerry.” The family’s last names were not shared.

“I think as we were editing the early episodes, what may not be obvious to viewers is when we began filming, it was just shortly after season one [that] we began filming the second season. So none of the news that is associated with Jerry Harris had broken, and so he was the Jerry Harris we had always known. We were filming him just as we would normally film him and the rest of his teammates,” Whiteley said.

“It’s tricky to do, because he shows up as a member of the team and we didn’t want the audience thinking as they’re watching these episodes — especially members of the audience that are familiar with what’s happened now off the mat with regards to Jerry — we didn’t want them thinking, Well, did the filmmakers know what happened? Are they even going to address this? So that’s how we chose to open up the series. It was a way of indicating to the audience, We’re aware, we are going to address this, we’re going to explain this part of the story. But first, we have to take you back in time to when before any of that had happened.”

Seasons 1 and 2 of Cheer are now streaming on Netflix. Main Image: Navarro cheerleaders pictured in Season 2 of Cheer, courtesy of Netflix.

Becoming Cousteau Reveals Environmentalist’s Evolution: ‘He Wasn’t Born With This Conviction’ (Video)
The Idea of a Castle: The Tragedy of Macbeth Production Designer Stefan Dechant on Carving Sets ‘Out of Light and Shadow’