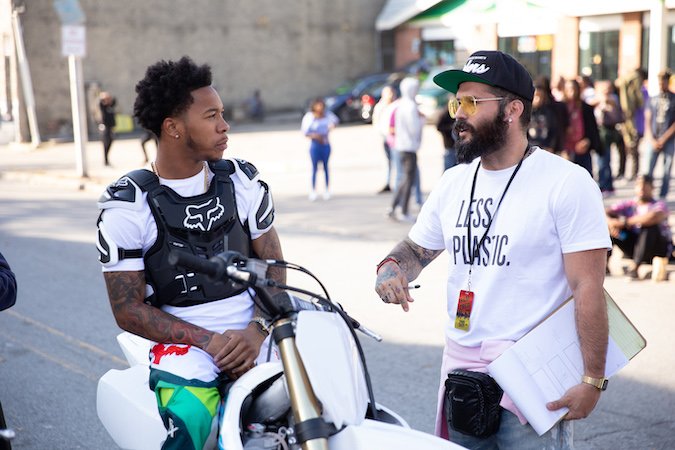 Nothing about La Granja, from Ángel Manuel Soto, suggests he would embrace the car chases and tense action of his second feature, Charm City Kings, which is centered on African-American dirt bikers in Baltimore. But the Puerto Rican director felt there were strong parallels between his personal history and that of the characters in the film.

While Soto’s La Granja told an intimate multi-narrative story of people’s everyday battles in a modern-day colony, his larger-scale follow-up called for new techniques and broader storytelling. Speaking to MovieMaker in fluent Spanglish — his very own Boricua style of it — he dissected his transition from a no-budget debut film to a studio production. A stint bregando (working intensely) in Virtual Reality also expanded his artistic tool set.

Producer Caleeb Pinkett presented him with Barry Jenkins’ early draft of the Charm City Kings screenplay, which writer Sherman Payne later fleshed out. The politically minded and eclectically skilled filmmaker says he got the job through his sheer personal affinity with the team and his clarity of vision.

For him, their shared experiences growing up in underprivileged environments shortened the distance between his native Santurce, a barrio in San Juan, and Baltimore. Charm City Kings rides exhilaratingly with Mouse (Jahi Di’Allo Winston), a strong-willed and endearing teenager, as he and his best friends go from wishful onlookers to active participants in the four-wheeled cliques that dominate their complex hometown. At the 2020 Sundance Film Festival, Charm City Kings received a Special Jury Award for Ensemble Cast. The honor was a dreamlike moment for Soto.

Tired of seeing stories about marginalized youth where their struggle overpowers any other aspect of their multifaceted lives, Soto was galvanized by the absence of sensationalism and fatalism in Charm City Kings. While not ignoring the harsh facts that affect communities of color, the movie opts for a hopeful resolution for its protagonist.

Positivity is revolutionary in that it goes against the overwhelmingly tragic outcomes seen in similar works. “Struggle might define me, but it’s what I do in the midst of struggle that makes me who I am,” Soto said. “We already know what our destiny is when we don’t have the right guidance, so why do that again? Let’s bring something different to the screen.”

On Charm City Kings, money opened possibilities that were unthinkable in
La Granja. Now, he no longer had to hacer de tripas corazón (play down fears and move along despite obstacles) to get creative and generate a wow factor. Creative toys were at his disposal. He experimented with more resources and technology to achieve larger set pieces and to build a world through production design.

But with more infrastructure to produce the film came a hierarchical dynamic he hadn’t dealt with before. Prior to this opportunity, Soto didn’t need to explain or justify his motivations or decisions. There was financial scarcity in his debut, but also an auteur mindset where every choice emanated from one source. He had overall control and final say at every step of the process. 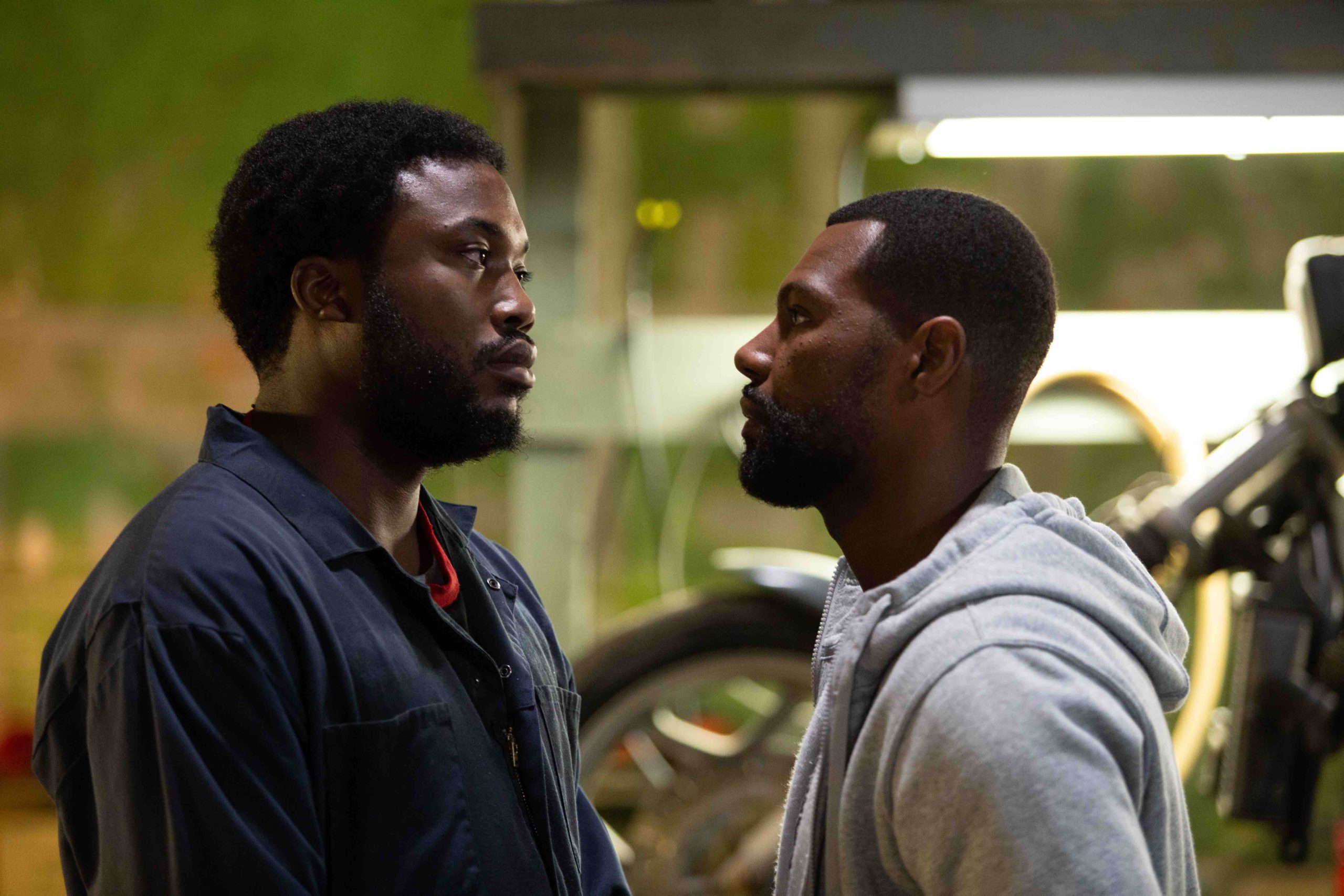 On Charm City Kings, with more people to answer to, he had to develop a new skill set that would allow him to engage more directly with others in the production and bounce around ideas to arrive at a consensus. He hopes other independent moviemakers seeking to evolve to bigger projects can make the transition as smoothly as he did.

“Even though cinema is always a collaborative effort, in this particular process where it wasn’t my intellectual property and I wasn’t the producer, I was directing someone else’s material. That collaborative process was very revealing for me. I realized it was very satisfying that as a director I found myself forced to have better communicative language,” he explained. “Beyond having an idea, it’s about having the capacity to find the language to communicate my ideas so that everyone can understand them and agree to them because I need other people to approve. I need those above to say yes.”

Soto attributes his lack of professional jargon or filmic vocabulary to his unique journey to moviemaking. A career in entertainment didn’t seem viable to him, considering Puerto Rico’s economic and political setbacks, so he studied architecture. Years later, he gained cinema knowledge by watching the masters and reading theoretical books — some of which he couldn’t afford, and would steal from bookstores.

La Granja was a trial by fire that showcased his ability to command a set, direct actors, and operate under pressure. But his work at RYOT, an L.A.-based VR production company, gave him an industry education in how to interact with creators, guided by much more structured parameters.

“Working on VR, I developed a sensibility of immersion and spatial awareness,
and understood how use it to my narrative advantage,” Soto said. “With VR, you have to consider that what’s around you is just as important as what’s in front of you.” Making 360 cinema, as he describes it, taught him the importance of lighting and dressing sets in a way that enables the camera to float through the scene and interact with a similarly conceived sound design to construct an immersive sensorial piece.

Soto and Charm City Kings cinematographer Katelin Arizmendi looked at all of the spaces Mouse would inhabit. In the movie’s visual pièce de résistance, “The Ride,” an entire neighborhood comes together on a hot Sunday summer afternoon on their bikes (or motoras, as Soto refers to them) to do tricks, race, and share good times.

“The Ride” included long and fluid takes, 300 extras, and an intricate chase involving police and members of the Midnight Clique, a group of elite street riders.

Soto had no experience with a logistical challenge of this magnitude, but he
did have several advantages: new gadgets, studio-funded security, and intensive pre- visualization that made him feel as though he’d edited the sequence in his mind already. The endeavor was expected to run without much trouble — until a gas leak forced shooting to stop.

Once everyone returned for reshoots, seasoned cinematographer Shelly Johnson joined the team, and reassured everyone that pulling off the chase was possible, given all the preparation. Nevertheless, they now only had 12 hours to bring it to fruition.

Soto and his crew divided the sequence into sections, not only to manage the cues but because they couldn’t have all of the eight city blocks they needed closed simultaneously. They had to space out the closures as they went along. Each portion of the chase would only get three takes and would be shot using three cameras, an Edge arm, and E-Bikes — camera-equipped motorcycles that proved essential to the film’s aesthetic.

The studio budget also meant having the best and most talented individuals on set.

“Of course, great people like that exist in the indie world, but sometimes you don’t have the money to afford them when you are not working with sufficient resources,” he said.

Highly trained stunt coordinators and Steadicam operator Stewart Cantrell helped capture “The Ride” in all its glory. Soto recalled that on La Granja, which was shot entirely with handheld cameras, a Steadicam would have been a dream.

Movie News: You’re Not Too Old; We All Make Mistakes; the Man Who’s Enjoying 2020
Before The Boys Season 2 Finale, Listen to This (Podcast)