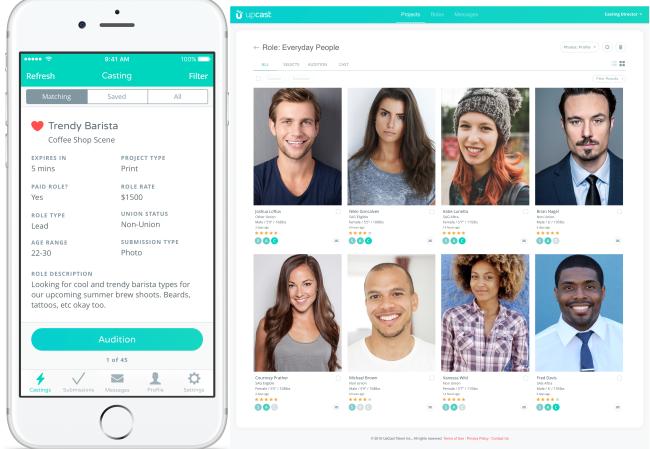 As mobile technology shakes up everything from dating to banking, Drew Doyon, founder and CEO of UpCast, wants to do the same for the casting industry.

UpCast is a mobile casting company that allows actors to audition for roles entirely on their phones.

UpCast is not trying to replace the traditional audition process, but rather jumpstart it by eliminating the typical first audition, where an actor submits a professional headshot and puts something short on tape for a casting agent. Doyon wants those preliminaries to happen digitally.

“I saw the pain points of auditions from both the talent and casting perspectives,” says Doyon, a former actor, model and production coordinator. “Our number-one goal is putting talent to work, easily and safely, while saving people time and money. We impact the bottom line and open production companies to a wider pool of talent than they have ever seen before.”

Talent pay a $14-per-month membership fee (after an optional 30-day free trial). Actors fill out a profile, including a reel and headshots, and search auditions using various filters that narrow results down by relevance. They have multiple tries before clicking submit on an audition tape. Casting directors do not pay a fee to use UpCast.

Having launched the app on iTunes last fall, serving L.A. only, UpCast currently reports more than 2,000 users, including around 500 casting professionals. In addition to agencies, UpCast can be used by independent filmmakers looking for talent, too. UpCast has also partnered with SAG-AFTRA to pull in new talent, offering SAG members a free six-month subscription.

Like any service—from Tinder to Craigslist—that involves sending personal information to a stranger, there’s an element of risk involved using UpCast. Although pay-to-play schemes are illegal in California under the Krekorian Talent Scam Prevention Act (prohibiting workshops and casting agencies from charging an actor for an audition), the exploitation of talent still occurs. For instance, the L.A. City Attorney filed five complaints on businesses, charging 25 people with this in February, 2017.

“Protecting everyone involved is very important to me,” said Doyon. “We manually approve every role. We talk with the casting agencies and verify their information on our platform. If something doesn’t seem right, we won’t allow it on the app.”

The app is easy to use—though, of course, it’s only as good as its users. UpCast aims to grow and diversify its talent and agency pools. Doyon hopes to expand to other cities and pull in work from larger studios and, beyond scripted material, reality television.

Maybe nothing will replace that rush of in-person chemistry you get when the perfect actor for your film walks into the room—but the ability to toggle through auditions in your pajamas might be a worthy trade-off. MM

The Bellflower Bellows: A Simple Guide to Personalizing Your Lens for Gorgeously Unique Visuals
Of Eastern Winds and Windfalls: What Do You Need to Know About Shooting in China?