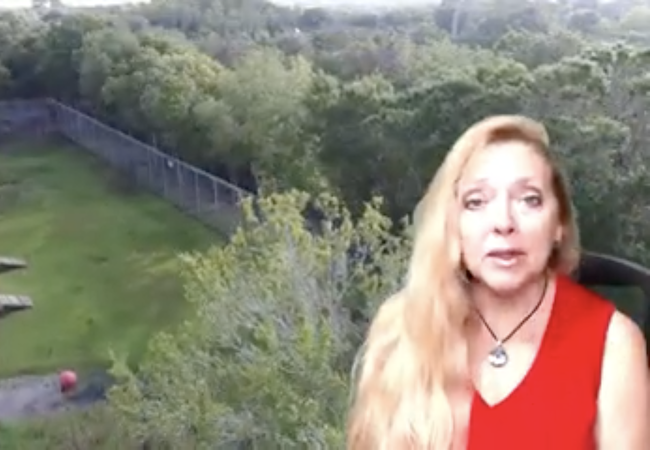 Carole Baskin spends much of Tiger King denying she killed her ex-husband, Don Lewis. In a new video, she argues that she was the victim in the relationship almost from the beginning — and that Lewis even lied to her about his real name for years.

She then goes into much, much more detail about the relationship than Tiger King provides — including her contention that she didn’t always know Don Lewis was Don Lewis.

“He had told me that his name was Bob Martin, and that he was just this poor guy who worked at this lot where they cut axles oﬀ of truck bodies, and that he worked for this terrible guy named Don Lewis,” she said. “And I didn’t know for several years, I think it was three or four years, who he was until I called the oﬃce for him one day and a [secretary] picked up the phone and said that that was Don Lewis that I was describing.”

Baskin further elaborated: “So I should have, at that point, just walked away. But I didn’t. And there’s nothing I can ever do to make up for that. But it was never my intention to break up his home.”

She noted that she was married at the time — and added that that was ﬁne with Lewis, who was also married.

“He was happy with the situation with me being married to my husband, my daughter’s father,” she said. “He loved those kinds of situations because that way he knew where all his girlfriends were at night. But at any rate, it it was still a horrible thing for me to be involved in.”

She continued: “And so Don went over and asked if he could have information about that, because maybe he would be interested in buying it. He got copies of the mortgage. And he brought it to me. And he said, ‘This just sounds too good to be true. Could you look at it and see what the catches?’ And so I looked at it and it was like, Well, if we pay $2,000 for it, we could go to the people who owe the $20,000 and say, ‘Hey, we’ll let you have it for $10,000. You just make payments to us. And if they don’t do that, if they’re not going to make the payments, then we could foreclose on the mortgage, and the house is probably worth at least $20,000. So we’ll make money by the people that bid on it at the courthouse steps. So we bought it and we made money on it. And we thought, wow, this was absolutely fabulous. So that was in 1984.”

She added: “Don had ever owned a couple of pieces of property prior to that… So he wasn’t a real estate magnate, like everybody keeps saying. He could barely read or write. I was the person who was going to the banks, asking to see the mortgages that were in default, getting copies of all of that stuﬀ, reading through it going to the courthouse ﬁnding out if there were other liens and judgments, trying to work out with the people, once we bought the mortgage, to try and get them to save their house and work with us to start making payments at a much reduced rate that they could aﬀord. And when they weren’t willing to do that, then we would foreclose on it. And I would do those foreclosures myself. And so that saved us in attorneys fees, and then we took every dime of that from 1984. And we just kept plowing it back into this real estate business that we were building.”

Things get much more complicated from there. Baskin describes a statutory rape accusation, Lewis’ divorce, and much more. They married and had relationship troubles. And then, in August 1997, Don Lewis disappeared. disappeared.

She notes that Joe Exotic is in prison, convicted on multiple charges, including attempting to orchestrate her own murder.

The Tiger King saga somehow continues: The producers are reportedly working on another episode that according to The Hollywood Reporter somehow ties in Vegas tiger magicians Siegfried and Roy.

Tiger King is now streaming on Netﬂix, but of course you know that already.

Introducing Demystified – All the Answers About How to Sell Your Film
North Fork TV Festival Seeks Science and Tech Stories — But No Sci-Fi or Fantasy, Please?