Cannes Do: A Filmmaker’s Guide To Cannes, Day 6 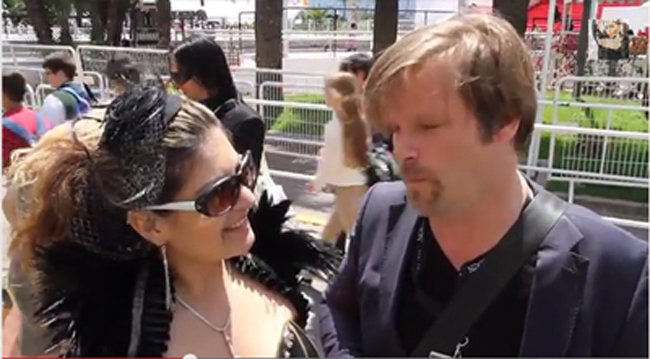 After two years of attending the biggest film festival in the world, I now realize the importance of Cannes to a filmmaker’s advancement, success, and results.

I can see it clearly now that some of the buzz around our work that my actor Richard Cardinal and I generated last year is paying off and having an impact on our experience this year. Thanks to our 2013 attendance, I have been able to build and nurture some relationships and reconnect with them a year later. It’s also funny also how there are some acquaintances in the industry who live in my own city, but whom I only get to see at these events abroad. The International Village that hosts the Pavilions of each country and the Film Market are great places to see familiar faces and meet potential key players on various territories.

This year, I met a very interesting distributor thanks to my dear friend Alenka Slavinec, a fine art photographer from Slovenia who attends the festival each year. His name is Roman Güttinger and he works as a distributor for the Ascot Elite Entertainment Group located in Zürich, Switzerland. Roman is also known as an actor for his roles in Cargo (2009), Roman Güttinger – Hollywood à discretion (2007) and Temptation (2001). He has experienced both sides of the screen and is now in charge of Grace of Monaco, the Olivier Dahan biopic that screened on opening night.

Today, I bumped into Roman on the Croisette and asked him if he could answer a few questions. Here is a little interview that I did with him, on the fly! We learn what distributors are looking for when they come to festivals like these. Roman believes that drama is a challenging genre for sales, especially if you are an unknown director. However, comedy and sci-fi are easy to sell if it’s done very well. As an indie filmmaker specializing in genre films, I find this information extremely valuable.

To know more about award-winning filmmaker Patricia Chica, follow her on social media in real time (or almost) at PatriciaChica.com, Facebook, and Twitter. Read part one of her Cannes adventures here, part two here,  part three here,  part four here, and part five here, and stay tuned for more Cannes Do diaries from Patricia throughout the festival! MM

Festivals: The Founding and Future of Dances With Films
Cannes Do: A Filmmaker’s Guide To Cannes, Day 7