Cannes Do: A Filmmaker’s Guide To Cannes, Day 7

Independent filmmaker Patricia Chica has been covering the 2014 Cannes Film Festival for us. You can read part one of Patricia Chica’s personal Cannes diary right here, part two here, part three here, part four here, part five here, and part six here. This is her last blog post from the festival! Patricia recaps her experience and shares insight into the most successful aspects of her adventure including meetings, interviews, and unexpected good news.

The Cannes Film Festival wrapped up this past weekend and I can only say that it was a success! At least for me. After a marathon of meetings, screenings, media interviews, conferences, and parties, as you can imagine, I’m completely exhausted but at the same time, extremely satisfied by the things that my team and I were able to achieve in such a condense amount of time.

In my first blog entry, I  shared with you what my three main goals  for this year’s festival:

2) Get international media coverage for my films

During the past two weeks, I was able to achieve two out of my three goals. My films got better coverage than in 2013 (with interviews for the CBC, Radio-Canada and my diary entries on MovieMaker.com, just to name a few). 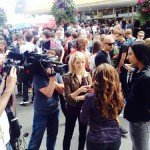 I still have not sold my shorts, but I was able to discuss with various buyers who asked me to follow up with them in the weeks to come. Anyway, the deals rarely happen on the spot as the buyers don’t always have time to evaluate movies during the festival.

Something that I had not anticipated during the festival was the announcement that I am attached to direct a new film. A scoop about a new movie project entitled La Siguanaba was publicly announced via press release on May 20 by my new producer and collaborator John F. Estrada. I’m very happy to be officially attached to direct this American supernatural thriller aimed at the Latin market. The screenplay is based on the book In A Drink by Nancy Brooks, centered on a legendary Central American myth about a goddess that returns to earth to eat the hearts of men. This character has always intrigued me since my childhood back in El Salvador. I like the fact that I can direct a story anchored in my roots and at the same time bring out a contemporary and edgy twist to it!

The importance of the Niche Market

What I realized while being at the Film Market this year, and by talking with different people in the industry, is that financiers are always looking for the next hot thing to satisfy “niche” audiences. Being a female director, but most importantly, a director with Latin-American roots, has opened more doors to me than I could have ever imagined. While the type of films that I direct have not really found funding in Quebec (the French-Canadian province where I’m from and that has lots of incentives for independent film production), my upcoming  genre projects seem to attract American, Anglo-Canadian and other Latin-American investors.

It’s also all about strategy. While it might seem that attaching a major international director would be the ultimate goal on any movie, it’s not always the right fit for a more niche project.

The thing that is really key to understand about the Latin-American market is that the viewers relate much more to a Latina or Latino filmmaker than international; they are proud to see someone like them succeed internationally.

I recall a very pleasant meeting that I had during the Toronto International Film Festival a few years ago with Hollywood producer Daniel Lupi (Her, Lincoln, The Master). He told me that when we were to work together, he would market me as a “Latina female director,” not a Canadian director. He said that there is more cachet and marketability to make me the first Salvadoran filmmaker to succeed in Hollywood. It had never crossed my mind before and I thought that it was very smart to identify myself in such a way! I have been following his advice since that conversation and it seems to be working for me.

In addition, what has been my biggest asset in my career is my trilingualism. I really took advantage of my three cultural identities in Cannes this year. When I meet French people on the Croisette, I tell them that I’m a Quebec filmmaker; when I meet Latin-American or Spanish people, I tell them that I’m from El Salvador and to all the rest English speaking people, I’m a Canadian filmmaker. I find it easier to communicate that way as I instantly find a common ground to connect with them! It truly works!

I use this same philosophy when I promote my work on social media too. It has resulted in a following on three different markets: English, French and Spanish. Having build a loyal audience for the past 15 years allows me to bring an international potential for sales and marketing to my movies. I recommend it to every filmmaker who wants to be ahead in the game.

One of our greatest publicity stunts this year was to wear gowns made out of latex. My actors and I have great connections with prestigious latex designers Brigitte More (the Netherlands), Rose Goudron (Canada) and Dawnamatrix (USA). When they found out that we were going to Cannes, with our new film “Serpent’s Lullaby,” they all kindly volunteer to dress us up and designed custom-made dresses for my actress Jenimay Walker and I, in exchange of exposure.

Being someone who likes to do things differently, I wanted to bring a new material to be worn elegantly on the red carpet as the Cannes Film Festival has not seen a lot of latex in 67 years, from what I know. Jenimay and I wore our dresses at the screening of Two Days, One Night and one of the guards told us that despite its beautiful designs, latex was not a material welcomed by the protocol of the Cannes Film Festival. They allowed us to walk on the carpet and watch the film, however, they did not want us to take pictures wearing our gowns on the red carpet as the material could be associated with a certain lifestyle. Who would have thought!? At least we tried and learned a lesson!

Another thing that I would like to share in this blog is that while I was busy at the Short Film Corner promoting and “Let it Out!” and “Serpent’s Lullaby” (which got a ‘Coup de Coeur’ mention as one of the 34 favorite international shorts), I also had “Ceramic Tango” in Official Competition at another festival called Festival International Entr’2 Marches. Festival Entr’2 Marches‘ purpose is to showcase short films with handicapped subjects in a wheelchair-friendly venue located on rue de Mimont in Cannes. Since the competition happens at the same time as the famous festival, about five other filmmakers from abroad also had their shorts programmed in both festivals, which allowed this smaller event to get an international attendance at their screenings.

I feel very blessed that about ten people from my cast, crew and partners were at Cannes this year to support the promotion of the three films. It is not always possible for short films to get the amount of exposure that we got and I feel that because we were all there for the cause, it just seemed natural to get these types of results.

I’m now back home in Montreal, resting… and following up with about 50 people that I want to keep contact with: sending emails, connecting on social media and continuing discussions. Hopefully next year, I will be back to Cannes with my first feature film and continue to learn and explore new ways on how to make my attendance a successful one! Stay tuned!

Cannes Do: A Filmmaker’s Guide To Cannes, Day 6
Festivals: Larger Than LIIFE