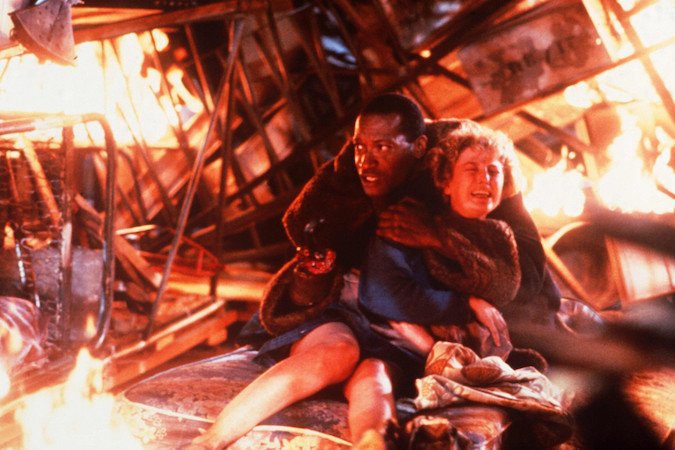 Candyman has aged very well: The 1992 story of a son of a slave who is murdered for loving a white woman — and reborn as a hook-handed slasher — looks at racism with an unflinching honesty missing from a lot of our racial dialogue today. It skillfully, scarily connects the bigotry of old with the bigotry of what was, at the time of its release, the modern age.

Rewatching Candyman reminds us how much and how little has changed since 1992 — and, in some ways, since 1892. The film reminds us that whatever our laws say, the United States still has unease around whites and African-Americans living side-by-side. The movie’s take on gentrification is grimly hilarious: All that separates public housing from yuppie luxury buildings is a fresh coat of paint, and the skin color of the inhabitants. It’s a literal and figurative whitewash.

Hey You: Subscribe to the Low Key Podcast on Spotify

Candyman returns in June with a Jordan Peele-produced reboot, and we at the Low Key Podcast prepared by watching the 1992 original. It comes from a British director and screenwriter, Bernard Rose, who sees American racial dynamics with cold clarity. In 1992, he made the kind of movie audiences say they want today: a socially conscious thriller with a diverse lead and a complicated female protagonist in the lead. It was based on a story by another perceptive Brit, Clive Barker. Tony Todd and Virginia Madsen are excellent in the leads.

Another Option: Subscribe to the Low Key Podcast on Apple

We’re hopeful the new Candyman, starring Yahya Abdul-Mateen II and directed by Nia DaCosta, will improve on the original. It will be interesting to see the story revisited from an African-American perspective, and experience that is lived rather than keenly observed.

While we wait, we’d encourage you to watch or rewatch the original Candyman, and listen to our podcast discussion, either here:

… or on your favorite podcasting app:

Candyman, the new one produced by Jordan Peele and directed by Nia DaCosta, arrives June 12 from Universal.