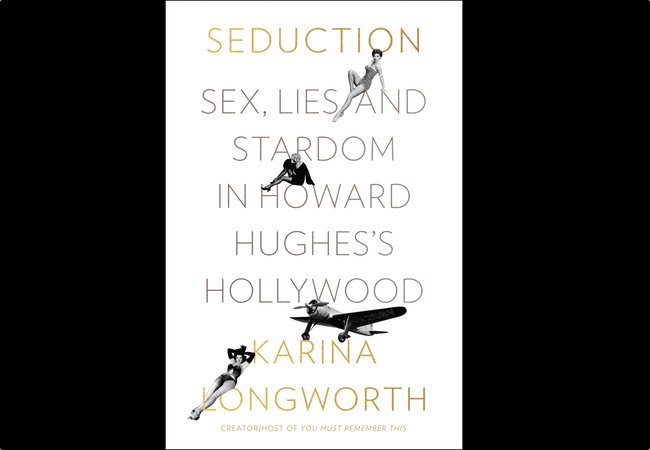 Karina Longworth is best known as the creator, producer, and host of popular Hollywood history podcast You Must Remember This, with past critical posts at the The Village Voice and LA Weekly.

Longworth has previously authored four books: three monographs, on Al Pacino, Meryl Streep, and George Lucas, and Hollywood Frame by Frame, which uses contact sheets to illustrate the history of the second half of the Hollywood century.

Her latest book is Seduction: Sex, Lies, and Stardom in Howard Hughes’s Hollywood. If you’re not clamoring to spend 500+ pages with another dude we have all talked about forever, you’re not alone. But Seduction is not that book. It is not the straightforward, incurious paean to yet another rich and over-glorified lothario that you might expect from the genre of biographies of already famous dead guys. As she stated at the outset of You Must Remember This’ 2014 miniseries on Hughes entitled “The Many Loves of Howard Hughes,” and I’m paraphrasing, the turgid annals of American masculinity need no further editorializing, sentimentalizing, or even eulogizing.

Longworth’s swerve around that pitfall becomes her narrative structure, and she holds true to it throughout the book. From Seduction: “As we move into an era in which there is frank public discussion of the exploitation, subjugation, manipulation, and abuse of women by men in positions of power, it’s time to rethink stories that lionize playboys, that celebrate the idea that women of the twentieth century were lands to be conquered, or collateral damage to a great man’s rise and fall.”

Seduction slow burns through the assembly, scandal-ridden boot up, white-hot peak functioning years, and dazzling crash landing of the Hollywood machine, and it thrills start to finish. Hughes certainly serves as our focal point, for he was a crucial hinge upon which the gates to the industry swung, but Longworth recedes him into the shadow. The women in his life, often reduced to footnotes in his story and the story of the system, take center stage. What’s rendered is a profile in negative—brought to clarity through an exhaustive piecing together of call logs, manuscripts both published and unpublished, legal depositions, tax filings, gossip column dispatches, correspondence, memoranda, and more.

The literary medium allows Longworth’s research to breathe, her voice to bloom, and her analysis to complete its circuit in a more fulsome way than audio can accommodate. The same figures are drawn in dazzling strokes, but the breadth provided by text opens up a background, and a background to the background, which Longworth fills with a vital crosshatching, interlinking the most disparate figures, concepts, and events. Hughes’ notorious compulsions become not simply the symptoms of a singularly damaged psyche, but the tell of a terminally patriarchal system. His obsession with money, his fantasies of control, his crippling phobias are the blueprint of this uniquely American, extraordinarily familiar industry. Seduction in a way feels like Longworth’s apotheosis—the deranged, captivating story of a century, told through the life of a man. MM